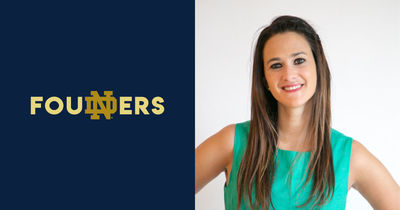 After graduating from the University of Notre Dame, Ale Breuer joined Teach for America with the goal of helping inner-city children achieve educational equity. Little did she know that when the entrepreneurial bug bit her several years later, she would be helping another group achieve a new form of equity in the highly competitive and fragmented nail care industry.

During her years at Notre Dame, the North Palm Beach, Florida native was not one to get manicures and pedicures. No, Breuer was busy with her studies and establishing what would become life-long relationships.

“Notre Dame is a special place to me,” she says. “It’s hard to describe the magic of academics, athletics and values. I am forever grateful to the University.”

After several years of teaching, Breuer decided she wanted to pursue a new career path and enrolled in the University of Chicago Booth School of Business. Living and working in a major city, manicures became part of her professional “wardrobe” and she soon learned not all nail salons and their services were created equal.

“There were two choices, high-end spas that were time-consuming and expensive or neighborhood shops with unpredictable quality and cleanliness. Salons’ operating hours were crazy, typically 10 a.m. until 6 p.m., a window of time when professional women are either at work or commuting. Another pet peeve? Not being able to make appointments and pay online,” she explains.

Knowing there had to be a better way, Breuer began researching the nail care industry and what she discovered planted the seed of an idea. “There are more than 300,000 nail salons in the United States and not one dominant company,” she pauses for effect. “Would you believe it’s a $13 billion industry?”

During her research, she came across the New York Times’ Pulitzer Prize-winning exposé of the nail industry entitled The Price of Nice Nails. The 2015 article revealed the inhumane working conditions of nail salon technicians, many of whom are immigrants from Asia and Latin America who are forced to work long hours for meager pay and tips. Exposure to toxic chemicals often lead to a host of health issues.

Breuer was appalled, but the knowledge further fueled her startup idea. That was when she did something her family and friends never expected: she enrolled in nail technician school.

She chalks her foray into cosmetology school up to curiosity, a love of learning and most importantly, as critical knowledge for an entrepreneur set on founding an ethical chain of nail salons. The experience didn’t disappoint. While instructors focused on the art of manicures, Breuer delved into the science behind the products and practices to determine how to make manicures last longer and protect nail health. Surprisingly, she and her fellow students graduated from the program without ever having given a person a real manicure.

“I am so thankful I did it,” she admits. “I really had to understand the business, and it proved my theory that here is a huge opportunity to disrupt the industry by making simple, but impactful changes for women on both sides of the table,” she says.

Breuer had a tick list of changes to make. For customers, she wanted more transparency around the manicure experience, including more health and product education. She expanded operating hours to make it easier for women to come before and after work. Instead of calling for an appointment or simply showing up, customers would have the opportunity to book online and even choose polish colors.

She also built in a model for recurring revenue, something typical salons do not have, by offering memberships. In addition to enjoying a discount on their favorite nail services, customers enjoy other perks like free gel removals and bonus points.

Customers weren’t the only ones to benefit from Breuer’s approach. Her nail specialists, dubbed the Squad, receive better compensation, a path forward for their careers, ongoing training, and education.

She and co-founder Kimberly Marsh, whom she met at the University of Chicago, tested the concept at a pop-up on Oak Street in Chicago before going live with their first salon on East Illinois in Streeterville. This was followed by additional salons on North Wacker and South Halsted. Breuer and Marsh were very selective about who they hired.

“We assessed many people because our model was so different. The reaction we got was a combination of surprise and skepticism. The women had been treated so poorly, they didn’t believe there was something better,” Breuer says. “But once they started working with the Ezza Squad, they loved it.”

She adds, “We built a special team. It definitely was not the norm in the industry.”

True to her original mission, Breuer was very open about Ezza’s commitment to equity. The message resonated with customers and investors. She was a finalist in the Booth School’s New Venture Challenge and raised more than $1.5 million to grow the company.

The business was soaring and then, in last March, the world ground to a halt with the COVID-19 pandemic lockdown. Employees across Chicagoland were sent home, including Breuer’s, to wait out the virus. Weeks turned into months. Breuer started an emergency fund to help her nail specialists support themselves and their families. Customers chipped in more than $20,000. Finally, in early June, Ezza Nails reopened its nail salons.

“We were so excited to be back. Unfortunately, downtown Chicago was a ghost town. Only 12 percent of our customers came back. We made the difficult decision to temporarily shut down the salons. We also pivoted our business model to include ecommerce. We had planned to get into retail; COVID-19 accelerated our plan,” Breuer explains.

Ezza now offers a growing selection of curated nail care products online along with video tutorials so that customers can continue their nail routines at home. The reception from customers has been positive. Meanwhile, Breuer looks forwarding to the salons reopening and the future.
“What’s most satisfying is having the opportunity to build an ethical company from the ground up and to produce value beyond dollar signs. Ezza Nails has been the most fulfilling experience of my life,” she says.

Thinking carefully, she offers this advice to others. “ Entrepreneurship is often fantasized in our society, but it’s not all glitz and glam. The reality is long days on the hamster wheel, grinding it out. Starting a company requires a mental, physical and emotional commitment. Be truly passionate about what you’re doing and why and follow your convictions.”