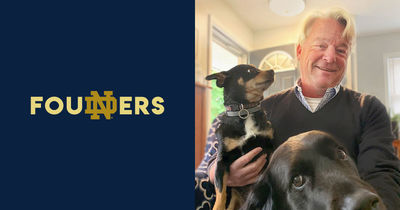 Credit Bob the Dog with what could be the packaging industry’s next breakout solution, one that protects a myriad of products, has the potential to keep millions of pounds of waste out of landfills each year and build brands. Sound improbable? After nearly two decades of hard work, this company founder and University of Notre Dame alumni is finally having fun and that says something.

Meet Richard Daniels, the founder of RNS Packaging. In 2000, he was on his honeymoon with wife Stephanie when they got a call letting them know their beloved rescue dog, Bob, has eaten a Styrofoam packing peanut from a wedding gift and needed emergency surgery to save him. The couple gave their go-ahead and $5,000 later, Bob was on his feet again. It was not an experience Daniels wanted to repeat so he began researching safer ways to pack and ship products.

If you need to know anything about Daniels it’s that once he gets ahold of an idea, he’s doggedly determined to see it through. Perhaps it’s because of his time in the military—he was a sergeant in the U.S. Cavalry and served in a reconnaissance role during Operations Desert Storm/Desert Shield. Perhaps it’s his belief that we all have a role to play in making the world a better place. Maybe he just loves dogs.

Though neither a materials scientist nor an engineer, Daniels’ search for better loose fill protective packaging led him to corn starch. In the 1990’s, corn starch as a basis for sustainable packaging grabbed a lot of headlines, but ultimately didn’t get far. The material lacked stability and rodents found it good to eat. Still, Daniels recognized its potential.

“When I floated the idea of biodegradable packing peanuts using corn starch, no one thought I was crazy. In fact, most people loved the idea. Packing peanuts are an annoying product; recyclers won’t take them and they end up in landfills. I wanted to create an alternative that you’d never see floating in an ocean, never see washed up on a beach or in a landfill,” Daniels says.

Over the next decade, cornstarch-based formulations were improved and stabilized. All of the nutrients were removed so it was no longer attractive to pests. Daniels connected with a supplier in Minnesota that could provide this raw material at scale using Midwest-grown corn.

“At this point, I had a biodegradable packing peanut that you could dispose of safely by throwing them into the sink and running the garbage disposal or by putting them in a compost pile. While not food grade, FunPak peanuts pose little danger if accidently eaten by people or pets. The peanut basically melts away after ingestion,” Daniels explains.

In 2015, Daniels launched RNS Packaging—short for really neat stuff—and his first product, FunPak biodegradable packing peanuts shaped like dog bones. This was a calculated move. In his mind, it wasn’t enough to go to market with a “green” packing peanut. There had to be something more to the value proposition to drive adoption. Daniels hit upon the idea of shaped and branded packing peanuts that not only protect the product and the environment, but also transform the unboxing experience of consumers.

“Sadly, sustainability isn’t enough for companies to change how they do things. Protective packaging is seen as a commodity. The only way to shake up the category was to do custom shaped and colored packing peanuts. The dog bone shape was the first FunPak. Then came stars, hearts and company logos. Companies and consumers loved them,” Daniels says.

Behind the scenes, the founder was totally stressed with all of the pressures that come with founding a company. He decided he needed more knowledge to lead RNS Packaging to the next level and returned to a long-held dream of earning a masters of business administration. Two programs made his short list.

“During my visit to Notre Dame, the people I met with stressed the importance of being a force for good and using business to impact social issues. Because my company’s purpose is to solve an environmental issue, Notre Dame aligned with my mission and values,” he says.

Daniels enrolled in 2016 and says the decision to go to Notre Dame was one of the best decisions of my life. “My time in the program really grounded me. I had been running around with my hair on fire, freaking out over payroll and overhead. I felt like I was drinking from a firehose 24/7. Being in South Bend with my classmates felt like a vacation. I would come home so relaxed even my wife and children noticed. In addition to the business knowledge I gained, the program was a great personal growth experience.”

Notre Dame also gave him the confidence to speak with C-suite executives. Hoping to accelerate the commercialization of FunPak, he picked up his phone and began calling everyone. This hands-on, guerilla ground game led Daniels to Storopack, a German company that is the global leader in protective packaging. A cold call connected him with someone on the other end of the line who was interested.

That was in July 2020 and up until this point, Daniels had single handedly bankrolled RNS Packaging, racking up debt and building equity. Calling the relationship with Storopack, a family-owned company like RNS Packaging, “a good deal for everybody,” Daniels now has access to everything he needs to accelerate the company’s growth trajectory.

“This has been a game-changer. Storopack has 17 manufacturing plants in North America and all of them can produce FunPak. I now have 50 on-the-ground  Storopack sales representatives selling FunPak to brands, distribution centers, third party logistic centers, and distributors. Meanwhile, I’m working with Storopack on pricing, sales and distribution channels, and logistics. And, I’m sleeping a lot better at night,” he says.

Unlike many U.S. industries hard hit by COVID-19, the pandemic has worked in Daniels’ favor. Because RNS Packaging is designated an essential business, his manufacturing operation never stopped. Although things slowed during the first two weeks of the economic shutdown in March, the cataclysmic shift to online shopping, including groceries, caused a similar spike in demand for FunPak.

“COVID created a new dynamic. The need for protective packaging materials increased dramatically. Online retailers began looking for unique unboxing experiences. At the same time, consumers realized how much they disliked traditional packaging like bubble wrap, air pillows, and Styrofoam peanuts that can’t be recycled and wanted alternatives. It was serendipity. Our great idea—branded, biodegradable packaging—met with great timing,” he says. “Our topline sales of FunPak are now up 30 percent over last year.”

That growth shows no signs of abating, thanks to growing demand for sustainable packaging, retailers responding to that dynamic, and the new operational and sales infrastructure Storopack brings to the table. Says Daniels, “Things are going gangbusters. We’re writing proposals, doing prototypes, and pushing the boundaries of what we can do with custom FunPak designs!”

FunPak is now certified “planet friendly” and fulfilling Daniels’ social mission to reduce the 17 million pounds of packaging that go into landfills each year. Customers range from corporate icons like Xerox to specialty beauty product marketer Lush to the San Diego Zoo. More great things are in the works but Daniels is mum—and having the time of his life.

“It  took unbelievably hard work to make it happen; everything my family and I had was on the line. I see a lot of people throw in the towel and go back to corporate America, but I stuck it out. People now come to me and ask me how I did it. I tell them, I’m not the smartest person in the room, but I’m always willing to listen and learn.”

Meanwhile, Daniels’ initial inspiration, Bob the Dog, has passed away. He and his wife have adopted two new shelter dogs plus a cat. The former Army Cavalry non-commissioned officer turned company founder offers this advice to would-be entrepreneurs. “Opportunities don’t fall in your lap; you have to look for them. If you see something that‘s always been done a certain way, there’s your opportunity. Find a better way and be ready to risk it all.”