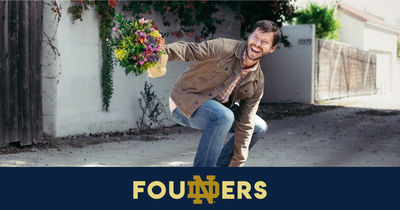 John Tabis laughs when asked if he has a favorite flower. The founder of the fast-growing online floral retailer The Bouqs, reveals somewhat sheepishly that he likes carnations, a staple of historically “cheap” bouquets.

“Carnations have a bad rap,” he explains. “The one I like is lavender and dusty gray. It’s really special.”

Tabis, a University of Notre Dame alumnus, should know. In 2019, The Bouqs sold tens of millions of stems sourced from 140 farms around the world. The company has a relationship with each farm, and it’s that personal, direct-to-grower connection that helped launched The Bouqs in 2012 when he and co-founder, Juan Pablo Montúfar, also a Notre Dame graduate and someone we hope to profile in the future, joined forces to disrupt the $50 billion floral industry.

Tabis was somewhat of a disruptor during his student days at Notre Dame as well, a school he nearly didn’t attend. Smaller colleges were recruiting the Pittsburgh native for his soccer prowess. On a lark, he visited Notre Dame in the dead of winter. “The wind chill was minus 15, my mom was miserable, and I immediately fell in love with Notre Dame. My heart was there.” The valedictorian of his high school class, the erstwhile soccer recruit earned an academic scholarship to attend Notre Dame.

Once on campus, Tabis set out to try just about everything. He tried out soccer his freshman year. He participated in student government. He joined the glee club and later formed a band called Sexual Chocolate. His senior year, Sexual Chocolate—which also included Montúfar on guitar—won Nazz, Notre Dame’s annual Battle of the Bands, by performing a cover of Queen’s Bohemian Rhapsody.

Tabis also walked on to the legendary Irish football team as a kicker his sophomore year, making 20 for 21 field goals during tryouts. A coaching change over the summer quashed his dream of suiting up. “I had to re-do the tryout due to the coach’s departure and didn’t. Part of me regrets that.”

While Notre Dame didn’t launch his football career, Tabis credits the university with launching his professional career. “My senior year, Bain & Company was actively recruiting on campus and offered me a job in strategy consulting. A Notre Dame degree carries a lot of weight; it certainly opened a door for me.”

After four years with Bain and in advertising, Tabis took a job with The Walt Disney Company, leading a team focused on consumer and brand strategy. Although he loved his job, his boss and working on “cool stuff,” Tabis grew restless. “I was a creative person in an analytics job who hungered to chart my own path. But who at Disney was going to give a 33-year-old a division to run?”

After interviewing with Twitter and Facebook, Tabis decided to join a high-flying startup, ShoeDazzle, as vice president of strategy. He fell in love with the culture, but still had an itch to be his own boss. That’s when a blast from his Notre Dame past re-entered his professional life.

“My old friend and band mate Juan Pablo Montúfar approached me about consulting with his family’s flower business in Ecuador. He saw gaps in the industry, which is fraught with so many middlemen even florists don’t know where their flowers come from. I saw the startup potential and suggested we work on it on the side,” Tabis says. “The Bouqs was born in 2012.”

For the next six months, Tabis, a few friends in California, his mother in Pittsburgh and Montúfar in Ecuador worked nights and weekends, relying heavily on Skype and WhatsApp to push the business forward. Tabis describes the experience as a “scrappy way to start a company.”

“At the time, my wife was the family bread-winner, and I was at home with our nine-month-old child and dog launching a company at the kitchen table,” he recalls. “We used friends, family and Facebook to tell our story of connecting flower growers with consumers. It worked! The company took off fast as customers fell in love with The Bouqs and our guarantee of high quality, sustainably sourced flowers.”

In The Bouqs’ first year of business, annual revenue was less than $2 million. In 2014, Tabis succeeded in raising a $5.5 million Series A round of funding, which went to building out the company’s team, operations and digital marketing strategy. And just last week, The Bouqs announced a $30 million investment from from Japanese enterprise business investor Yamasa. By 2017, the company had cracked the realm of tens of million of dollars in revenue. As a privately held company, The Bouqs does not report earnings, but suffice it to say they say they're healthy. Even so, Tabis admits starting a fresh-from-the-farm floral business was borderline insane.

“All of it was so hard. Ideas for startups are easy; the nuts and bolts are not. But it was the best time, too. Everyday was the Wild, Wild West. We had no rules so we could be super creative,” he says.

Having survived those early, frantic startup days, Tabis advises others eager to follow his path to research what being an entrepreneur really involves. “Entrepreneurship has been glamorized—beer on tap, cool things like ping pong in the office. What it really is about is solving hard problems without resources. Talk to people who have done it before you start a company.”

That said, he also borrows a line from Nike with this second piece of advice: Just do it. “Understand you may fail, but unless you start something, nothing will happen.”

Tabis credits his loving parents, food on the table, great support and luck for his success. Giving back has become an honor and priority in his life. For the last three years, he has advised women business owners through NAWBO-LA. He is teaching a course called “The Journey to the Entrepreneurial Mindset” at the UCLA Anderson School of Management, where he earned his MBA. He also serves as a brand advisor to the Notre Dame Athletics Department and has loved judging Notre Dame’s annual McCloskey New Venture Competition.

Says Tabis, “When Notre Dame asks for anything, I gladly say yes.”

Does that offer include field goal kicking?