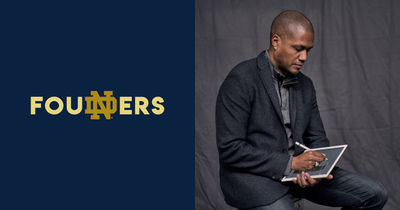 There is a line on Kevin Bethune’s company website that reads: Innovation is nonlinear. The idea is underscored with a freeform scribble, perhaps by an artist who has never thought to color inside the lines.

Bethune is the founder of dreams (dot) design + life, a global think tank he founded in 2018 that provides strategic design, industrial design and insights into new ecologies to startup companies and corporations seeking a more direct path forward in the difficult world of innovation and commercialization. Though he wears the mantle of chief creative officer, Bethune serves as both visionary and Sherpa, looking beyond the map into what the future can be and leading his clients forward.

It’s a long and winding path from Downriver Detroit, where Bethune spent most of his childhood.

“I was just this nerd of a kid who loved to draw and learning about how things worked. I was fuzzy on where I was going for college—Michigan State and the University of Michigan were the local choices—then out of the blue I got a postcard from Notre Dame inviting me to spring visitation for under-represented minorities,” he recalls.

Bethune went to South Bend and the weekend visit sold him on Notre Dame. “I felt the spirituality. I’m not Catholic, but I appreciated it as a Christian.”

Although drawn to art, Bethune chose a more pragmatic degree, mechanical engineering, knowing there would be a job waiting for him after graduation. “At the time, I saw drawing as a hobby rather than a profession, but the undercurrent of creativity remained.”

While an undergrad, Bethune did an internship in the auto industry and as a Detroit native, it seemed a good use of his engineering degree so he interviewed with automakers. Recruiters told him he would spend up to ten years on a factory floor learning the business before being assigned to large engineering projects. The message was a bit disappointing.

“Out of the blue I got an email from Westinghouse inviting me to come to their headquarters in Pittsburgh and interview for a position in the nuclear services business,” Bethune says. “The story they pitched was entirely different: they desperately needed new talent. I would be working on big projects with high performing teams immediately. That was very appealing and I took the job.”

During his five-plus years with Westinghouse, Bethune fulfilled multiple roles, culminating into a senior engineer/project manager. By age 27, he’d received two Westinghouse Signature Awards for exceptional project performance and was awarded a U.S. patent while championing a team through an innovation program aimed at launching a new product line.

The rapid rise taught Bethune a lesson. “If you do things well, people look to you to do it over and over again,” he says. “My curiosity got the better of me and I decided to get an MBA to learn the language of business and advance my career.”

He won a scholarship to Carnegie Mellon’s Tepper School of Business and when it came time for what next, Bethune decided to color outside the lines. “The voices said, ‘Go here for power and influence, go there for money.’ I listened to my own voice and went to work in an environment that gave me strategy, creativity and technology.”

That environment was Nike. Bethune landed a business role but through informal coffee chats, he connected with people on the product side. Seeing an opportunity to expand his product and creative knowledge, he moved to global footwear and became a product process manager working with designers, engineers and product marketing. Eventually, he designed shoes for the Jordan Brand.

After five years passed, Bethune once again did some soul searching. His dream job was a self-described “multidisciplinary convergence” where he could apply creativity without losing technology and business. After consulting with his wife, the family moved to California so Bethune could pursue a master's in industrial design at the ArtCenter College of Design in Pasadena.

“The turning point for me was seeing companies hiring separate firms for strategy, design and technology. Some colleague-friends and I decided to roll it all into one firm. The energy we created kicked up a lot of dust,” he says.

That dust led to the founding of Booz Digital, a division of venture firm Booz & Company. Eventually, the group was then acquired by Boston Consulting Group to serve as an innovation incubator for clients. Under Bethune’s leadership as vice president of strategic design, the handful of strategists, designers, and tech gurus grew to force of 1,000 with eight innovation centers around the world. “We were the fastest growth engine in Boston Consulting Group’s history,” he says simply. “It was an honor being part of it.”

In 2018, Bethune founded his latest venture, dreams • design + life, based on his passion for integrating strategy, design and technology into a seamless experience of physical and digital while emphasizing human experience and potential. Says Bethune, “My own firm gives me a place to expend my calories the way I want.”

Bethune thought that his client partners would largely be composed of startup companies from Silicon Valley, but has been pleasantly surprised by the large corporations that knocked on his door. Bootstrapping the company, he relies on virtual teaming, bringing in colleagues as needed.

When he first started his think tank, Bethune carefully prepared pitch deck with all of his approaches. He learned pretty quickly that just as innovation is nonlinear so are consulting relationships. “I found I had to have faith in the relationship and it would find its own path. As an innovation partner, things are fluid. During strategy sessions, we convo around big ideas and wrestle them to the ground. That’s the nature of creative problem solving which then leads to solid design ideas.”

Bethune thought client engagements would be short and project-focused, six-to-eight weeks tops. However, many clients retain dreams • design + life on an ongoing basis. He believes it’s due to his focus on trend curation, future visioning, emphasis on ethnographic research, and a holistic approach that gets inside the heads of customers. Bethune makes it clear to clients that taking a futuristic view is essential to survival. “We live in a hyperconnected world. Things happen and customer behavior changes dramatically,” he says.

The COVID-19 pandemic proved this out in spades. While Bethune’s business hit a pause like the rest of the world, clients soon returned with the question, “How do we move forward in this new reality?”

For his part, Bethune is thankful for the power of relationships he has built and leveraged over the last two decades, starting with the enduring friendships kindled during his Notre Dame years, to those in business, and finally with his wife, who has supported him along the twists and turns of life. He believes
companies need to put more of their bandwidth on the future.

“I encourage companies to look up from what they’re doing and open the aperture. Companies have reams of quantitative data. What they need now is data to support qualitative strategy: attitudes, aspirations and behaviors,” he says.

Referencing the national discussion on the need for more racial equality, he says simply. “I want to see a little bit of me in what you’re selling. I want to see myself in your organization. As a Black design leader, I don’t see enough of me. You can’t espouse to be a leader if you don’t mirror your audience. Therein lies an opportunity.”

Bethune’s advice to those who want to start something is this. “Don’t be afraid to lean into your curiosity. Have an appetite for experimentation. Introduce yourself to someone. Listen to your dreams. Listen to your convictions. Putting energy into blurry notions creates evidence for future choices.”