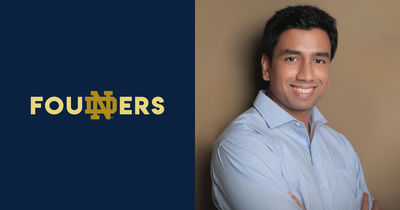 Asked why he left the nation of his birth, Sri Lanka, and journeyed 8,910 miles to South Bend, Indiana, to attend the University of Notre Dame and Don Alexander Dinike Jayamaha smiles, explaining it happened “quite by chance.”

“I hadn’t visited nor did I know much about Notre Dame. It was a bit of a culture shock, but the very welcoming atmosphere made me feel quite at home right from the start,’ he says.

Jayamaha swiftly found his sweet spot in student life as a member, project leader, and eventual board member of Notre Dame’s Student International Business Council, an organization that encourages students to employ business as a force for good. His reason for getting involved was far more personal than most.

“My childhood in Sri Lanka was influenced by a brutal civil war. I’ve seen the vulnerability of the people affected, and at the same time, the resilience and potential for growth when others have reached out to help. This made a key mark on me. I always wanted to return to Sri Lanka and do my part to impact people’s lives and contribute to the country’s growth,” he says.

When Jayamaha graduated in 2008, the civil war in Sri Lanka still lingered, but his sense of responsibility to help marginalized segments of society burned bright. He left Notre Dame with the confidence to put his ideas into action. But first, the University of Cambridge in England awarded him a Commonwealth Scholarship, which he used to earn a Master of Philosophy. While at Cambridge, he continued help others through Enactus, an international student organization that employs entrepreneurial actions to effect change.

Returning to Sri Lanka, Jayamaha knew he wanted to start a commercial entity that would ignite inclusive growth in his country. Historically, Sri Lanka’s economy has been driven by agricultural crops with global popularity, including Ceylon tea, coconut, rubber, and cinnamon. The nation still prides itself as producing the world’s finest tea. Could it be tea would play a role in his endeavors? Do the Irish wear green on game day?

While studying the subtle notes of a particular malt whiskey—he’s an afficionado—inspiration struck. “I began thinking to myself why tea cannot reach the same status of a fine wine or whiskey, where not just a connoisseur but even a layman can smell and taste the notes of a particular tea and be able to identify key characteristics that correlate to its region of origin,” he recounts. “Curious, I found a company that makes extraction machines in Australia with roots in the wine industry. At the initial trial, we managed to extract nine different aroma profiles from just one raw material.”

The idea for a tea business specifically focused on the ready-to-drink beverage market began brewing. Jayamaha knew he would have to scale his extracts to commercial volumes while meeting strict flavor and aroma profiles to attract interest from global companies. Thus he exchanged traditional subjective human measures for data.

“We mathematically graphed each of the aroma profiles to show which notes were desirable. This allowed us to maintain consistent flavor/aroma notes across time, overcome seasonal variations in raw material, help customers create unique sensorial experiences for their consumers, and appeal to consumers by linking sensorial experience with the psychological,” he says.

Two things struck Jayamaha from these initial, critical exercises. Natural tea extractions would not only provide a unique angle as a base for the food, beverage, fragrance and nutraceutical markets, he could also achieve considerable cost advantages by bringing the extraction process close to source—Ceylon tea growers in Sri Lanka. He also recognized an opportunity to tap into growing consumer demand for transparent sourcing, healthier ingredients, and foods and beverages produced with global awareness.

Jayamaha left his job and launched Ethical Extracts in 2016 with a strategic partner: Akbar Brothers. “I needed one of the world’s best players in Ceylon tea to handle the supply chain,” he explains. “Akbar Brothers is among the largest global traders of tea and the largest in Ceylon tea with access to the best hand-picked teas. They were not doing tea extraction and agreed to a joint venture with Ethical Extracts.”

While he enjoys tea, Jayamaha’s true passion is the company’s business model which is built on four pillars: ethically lean, ethically green, ethically innovative, and ethically empowering. When he knocked on the doors of top global beverage and flavor companies in North America, Europe, and Asia with samples of his extractions, he was met with overwhelming enthusiasm for his tea extracts and business model.

Starting a company in a field where one has little first-hand experience and catering to geographic markets one doesn’t know personally makes for an especially challenging environment. Partnering with the Akbar Brothers was an important win. To accelerate traction and open doors to more potential customers, Jayamaha knew he needed a second partner with specific expertise and relationships.

MANE is a global top five flavor and fragrance manufacturer with French roots and 150 years of experience in the global food and beverage space. Since coming onboard as a stakeholder in Ethical Extracts in 2018, MANE has played a key role in developing the company’s innovations through their dedicated tea and coffee lab in Singapore and their global delivery capabilities.

“I was very fortunate to find partners early in the company’s life who shared the same vision and commitment to deliver innovation, quality and goodness, and were determined to build a business that would be good for profits, people and the planet. Thanks to the expertise of Akbar Brothers and MANE, we didn’t have to reinvent the wheel, but instead could focus on executing our model and hit the ground running on a global scale” he says.

Among Jayamaha’s proudest moments as a founder are achieving these milestones: Ethical Extracts becoming one of the world’s first certified CarbonNeutral® and WaterConscious® extraction companies and the company’s ability to be completely transparent and traceable across its product line.

He is humbled by the traction made in a few short years, crediting his partners and team members. What began as a socially responsible vision in 2016, today is a global company with a product portfolio that includes extracts of Ceylon black teas, Japanese green teas, and Brazilian and Colombian coffees that are currently commercially exported to countries across Europe and Asia.

Harkening back to his Notre Dame days of learning to have confidence in his ideas, Jayamaha offers his perspective to those who dream of founding a company.