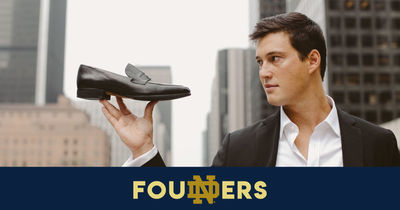 Ask Justin Schneider what got him into the University of Notre Dame and he serves this up:

“I was really good at running in circles, throwing steel balls and jumping.”

Not typically something you’d see on a college application. But then, Schneider is not your typical guy. In high school, he was a decathlete, one of those rare, “jack of all trades” track-and-field athletes who competes in ten different events. What’s more, he was very, very good. So good, in fact, that top universities from across the country, including Notre Dame, wanted him.

Schneider and his parents started making the rounds and the common theme he got from university recruiters was, what are you going to do for us? Schneider got an entirely different welcome in South Bend.

Schneider enrolled, set on becoming an architect. But after sitting in on an industrial design class called Concept Ideation 101, he changed academic lanes. The idea of designing products people experience every day hit a creative nerve he wanted to explore. “I thought engineers designed cars, but the reality is industrial designers create the experience of a car. It was a balance between art and math with an overlay of consumer demand. I changed majors,” he says.

Nearing the end of his Notre Dame years, Schneider felt a desire to make sure whatever he did in life was good and right. “I wanted to prove I could bring polarizing forces together in my adult life as I had as a student-athlete. Look at Notre Dame; the legend of Knute Rockne and the innovation of the IDEA Center. I wanted to honor the past but move into the future. I wanted to build a community and a legacy.”

Before he could change the world, Schneider needed an internship, preferably an internship with adidas, the second largest sportwear manufacturer in the world. It seemed an obvious fit, but after applying for a design position via traditional and then not so traditional routes—he reached out to ten adidas employees on LinkedIn—and getting no response, Schneider attempted a Hail Mary pass. He called adidas Customer Service. As improbable as it sounds, he finally landed a coveted internship.

Eventually, Schneider worked as an industrial designer in the athletic shoe divisions of adidas and New Balance. His bosses stressed his job was not simply to design shoes that were lighter or more comfortable. His responsibility was more experiential: he had to inspire athletes to win.

While Schneider embraced the ideal and was challenged for a time, he soon became restless, realizing he had outpaced the opportunity of the positions. “My learning curve is vertical, and I enjoy the endless challenge of improving on what I’m doing. I needed somewhere to throw my energy,” he explains.

That somewhere was a hard pivot to Madagascar, where he spent nearly two years with the National Geographic Society as a design director. While there, he created a portfolio of botanical illustrations and formulated the idea of his own shoe company, Wolf & Shepherd, that would bring together the opposing forces of classic men’s footwear with the technological advances and comfort of athletic shoes.

Back in the States, Schneider reconnected with Karen Slaggert, who was the director of student entrepreneurship Notre Dame (and now retired). She convinced him to enter the 2015 McCloskey Business Plan Competition. “It seemed like a good exercise,” he says. “I learned how to write a business plan and met a lot of people in the business and finance communities.” He also walked away with the $25,000 grand prize.

Starting a company is never cheap but launching a shoe company is a particularly capital intensive. Materials, manufacturing, and marketing are costly, particularly at low quantities. Schneider originally bootstrapped Wolf & Shepherd with $15,000 he raised selling fine art prints from his time in Madagascar and cashing in his 401(k).

Schneider’s first month in business, he had no money in the bank. He needed to sell 50 pairs of shoes to foot the bill on his initial factory order. With 12 pairs sold, his father wanted to know how he planned to sell the other 38.

“He asked, ‘Has your brother bought a pair?’ When I answered no, dad said, ‘Go ask him to help.’ After I literally begged my brother to buy and offered a refund if he was unhappy, he bought two pairs. He also agreed to email his friends about my shoes. Late that night, I had 18 new orders from my brother’s company and brought in $6,000 in sales. I learned there was no shame in asking for business because what you’re really asking is for people to be part of your journey.”

Schneider also learned to live very, very frugally. “For two years I didn’t pay myself a salary. The first year I lived off $1,000 a month in a beach hut in Jacksonville, Florida—and I got married. It wasn’t until the third year, when we were doing about $6 million in sales, that I finally took a salary. I thought anything I pulled out would hold the company back.”

Investors provided the fuel to grow Wolf & Shepherd’s digital sales presence as well as brick and mortar stores in Los Angeles and New York City. Schneider’s initial raise was $250,000 from family and friends. He then completed a $1.9 million seed round that included the Irish Angels. Then in July 2019, as Wolf & Shepherd reached $11.5 million in sales, Schneider raised another $4 million. To date, the company has raised $7 million, which has almost entirely been directed to working capital, and in the process, achieved a company valuation of $50 million. The company’s compound annual growth rate since its founding in 2015 is 133 percent.

Like other retailers, Wolf & Shepherd has not been immune to the COVID-19 pandemic. Sales dropped precipitously in late March and are creeping back. Schneider has wisely used the time to sign a high-profile brand ambassador, Steve Nash, who was recently tapped to coach the New Jersey Nets; capitalize on a new crossover hybrid styles like the SwiftKnit Derby that are well suited for home office life; and continued to focus on a digital-first sales and marketing strategy.

While building a successful business—Wolf & Shepherd sold more than 100,000 pairs of shoes in 2019—Schneider also built something more precious with his wife and business partner, Hope. The couple have three children under the age of four, Stella, Mackey and Isla. His desire to bring together opposing forces, in this case, a happy family and business success, is stronger than ever.

“A well-lived life is demanding. We have to realize we can’t overcome the burdens of life without God. My responsibility is to love God, love others and appreciate my best effort is good enough,” he says.

“Beyond that, you have to try, care, and believe that you’re going to win every day. Get the rebound and shoot again.”