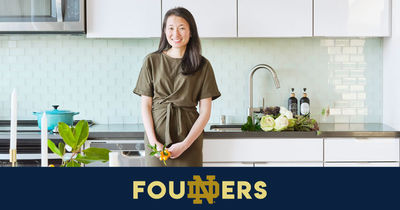 Lindsay Meyer likes to mix things up. Literally. When she founded Batch in 2016, her goal was to disrupt the home staging and retail industries with a constantly changing product mix presented in upscale homes for sale in highly coveted west coast cities, including San Francisco, San Diego, Los Angeles, and Seattle.

Meyer’s concept is ground-breaking. With Batch, shoppers can literally purchase everything they see. The home. The furniture. Lighting and art. Tableware and bed linens. Right on down to the seltzers chilling in the gold-toned cooler. It’s all deliciously, wonderfully for sale. No two projects are the same; each is a totally different, thoughtfully curated in a way that’s designed to take the breath of jaded consumers away while moving homes and merchandise.

Meyer is not an interior designer. Far from it. She earned her degree in Science-Business from the University of Notre Dame, a school she chose in large part because of its prominence as an academic powerhouse in the Midwest, a region familiar to her childhood home in Minneapolis.

Arriving on campus, she meandered through majors in the College of Science and ultimately chose the Science-Business program. “What it allowed me to do was build my own degree,” she explains. “I dove deep into physics because I liked the logic, analysis and data-driven perspective. I was also intrigued by business classes like accounting and marketing. It was an ambitious, academically tough approach straddling two colleges at once.”

The experience taught Meyer how do more with less time. She stumbled into Notre Dame’s student investment club. Her motivation was purely social—the membership ratio was nine-to-one male-to-female—but she quickly became fascinated with investing. By her junior year Meyer was president of the 400-member club, overseeing a half million dollar portfolio.

That experience led her to an internship at Goldman Sachs, which was a life-changer. She became passionate about helping fellow students break into similar investment banking firms and spearheaded a new, on-campus career recruiting event called Wall Street Week. Her motivation was simple. “I wanted to pay it forward. It’s difficult for non-Ivy League graduates to get Wall Street jobs, and I believed in Notre Dame’s ability to place similarly qualified students in these jobs.”

After finishing her coursework early, Meyer headed to Silicon Valley where she spent six years in biotech. This included two-and-a-half years with Canaan Partners where she executed ten deals, raising $175 million in capital. She embraced her immersion in Silicon Valley’s ecosystem, soaking up all she could listening to thousands of pitches by entrepreneurs.

“It was very empowering to be around people, a growing number of them women, who’d founded brilliant companies. I developed a comfort level with starting my own company,” she says.

That company was Active Collective, a commercial real estate venture to consolidate boutique fitness businesses. After two years, Meyer decided to shut the company down after struggling to raise capital. “I was spinning my wheels. As a former venture capitalist, it was humbling being on the other side of the table, trying to raise money. The experience was painful but taught me resiliency and grit.”

She took a job with actress Hillary Swank’s luxury athleisure company Mission Statement, an extreme pivot away from biotech and science to a fashion and lifestyle. Meyer says it was easy to rationalize as she is a creative person at heart. Less than a year into the gig, a group of Silicon Valley investors approached her about founding and leading a company that would redefine the future of retail.

“It sounded too good to be true, and I wasn’t sure I wanted the stress of another startup,” she says. Several sushi and salad lunches later made her realize her backers were serious. She said yes and six months later in October 2016, Batch was incorporated.

The concept is truly unique: partner with high-end realtors, developers, and home builders and instead of staging their properties with generic furniture and accessories, Batch brings in the very latest décor, art, and tech from top online retailers and California artisans for a totally immersive sales and shopping experience.

“It makes perfect sense for this market,” says Meyer. “High-end homebuyers are buying a lifestyle. The term we use is ‘contextual commerce.’ Batch is powering a commerce experience that’s built within a non-store retail environment that’s immersive and contextual. You get to touch and test the item in the exact space that you might live with it.”

Part of the initial strategy were flagship brick-and-mortar locations in San Francisco and New York City. True to the Batch brand, every eight-to-ten weeks, everything in the stores would change, ushering in a new “batch” of 15 to 20 new brands and hundreds of new products. There was a meticulous method to each iteration. Meyer carefully tracked the data of what items sold when, where, and why to support future product decisions in the homes she would go on to stage as retail showroom environments. Her background in operations and finance proved invaluable.

The Batch concept has proved very popular. Says Meyer, “We catch people at the right stage of life, buying a new home whether it’s a first home or a pied-a-terre. Everyone wants a fresh look and here it is. Realtors and real estate developers value the product mix and experience we create around their listings.”

Through the early years of her new venture, the biggest challenge for Meyer was finding focus, an issue for many startups. However, focus seemed to find her. In late 2019, Meyer made the difficult decision to close Batch’s retail showrooms to concentrate on the more profitable core business of shoppable staging. When the COVID-19 shutdown occurred in March, it proved fortuitous timing as traditional retail has skidded to a halt, with many businesses forced to close permanently.

Despite the pandemic, Batch is thriving. California’s real estate market, like others across the country, has become very dynamic and more high-dollar homes are for sale. Listings in San Francisco have risen 92 percent in the last six months. The Batch “touch” gives realtors and developers a distinct advantage in a crowded market.

“If you had told me four months ago that September 2020 would be our busiest month ever, I wouldn’t have believed you,” Meyer says. “Batch has an insane amount of work and I feel good about what we’ve done and where we’re going.”

For the last three years, Meyer has returned to Notre Dame as a guest speaker in the Case Studies in Entrepreneurship class offered in the College of Engineering. This year’s visit will include this advice:

“Not everyone needs to be an entrepreneur; we need lawyers, doctors, salespeople. Regardless of your choice of careers, focus on learning all that you can, building a network and finding out what you really care about. Biotech wasn’t fueling me as a person; I’m lucky to have created a company that does.”