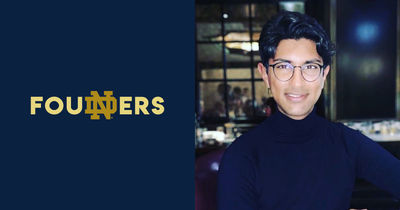 Casting about for a name for his startup company while a student in the University of Notre Dame’s ESTEEM Program, Anand Shah knew he wanted something short, one or two syllables at most; memorable; symbolic of the company’s crowd security solution; and, if possible, friendly. It was, he admits, a tall order, but his girlfriend proposed the perfect solution:

Shah smiles at the memory. The word means elephant in Swahili, the language of his earliest childhood years in Kenya. Elephants are revered in Africa for their power and strength, but also for their innate way-finding abilities. Even during the most challenging droughts, an elephant can find its way back to life-giving waterholes no matter how distant the memory or difficult the trek. And so, a tech startup that uses advanced sensors, data analytics, and artificial intelligence to detect life-threatening situations and lead security personnel to the source, had a name with deep personal meaning.

Shah’s path to company founder is certainly unique. Born in Kenya, his family moved to London when he was three. During his middle school years, he lived in India. For high school, he attended a boarding school in California while his parents remained in India. Then came a life-changing journey.

“When it came time to choose a college, my father and I went on a massive road trip across America, visiting 22 colleges in 48 days. It was intense, but at the end, Notre Dame was among my top choices. Two things attracted me:  the spirituality and structure it provides for students and the ‘pay it forward’ attitude of the University’s alumni. This separated Notre Dame from other universities and when I received my acceptance letter, I enrolled,” Shah says.

During his freshman year, Shah came across the ESTEEM Program, an 11-month Master of Science program that immerses students in technology fields of study into the action of entrepreneurship. Seeing it as a perfect fit for his interests in science, technology and entrepreneurship, Shah joined the program four years later. Not only did ESTEEM build his knowledge, the experience instilled in him two qualities that changed his approach to life.

“Before ESTEEM, I lacked confidence. Entrepreneurs need to be fearless and learn how to ask the right questions. Today, I do not hesitate. I always create a list of questions for projects I’m working on and I ask those who can lead me to the answers,” he says.

Questions and the problem solving they reflect are what ultimately led Shah to launch Tembo. He was working in London in 2017 during a period of repeated terrorist attacks. The London Bridge attack on June 3 during which three perpetrators purposefully drove a van into pedestrians, leaped out and began stabbing people left an indelible mark on Shah and spurred important questions.

“I was shocked by the attack and surprised by the slow response time despite there being security cameras everywhere. It took three minutes for someone to contact the police and another five before police responded. I asked myself, ‘What if the cameras could see the change in behavior—people who ordinarily walk are suddenly rushing down the bridge—and automatically send an alert?’ A potential terror attack would be detected in seconds rather than minutes,” he says.

The London terror attacks along with mass school shootings in the United States such as the one at Parkland High School in February 2018, led to Shah’s foundational idea of technology that monitors crowd movement and sends alerts when behavioral changes are detected.

In 2018, Shah founded Tembo with Dan Kervick, a fellow ESTEEM student and U.S. Navy veteran. Tembo has recently joined forces with Farshore Partners, a technology development firm based in Chicago that has taken a stake in Tembo through their investment arm, Dashfire Solutions.

Tembo initially started as an outdoor solution, but soon pivoted to indoor security, specifically to address security issues in schools, which are a more difficult security play as first responders typically don’t know the layout of individual schools. Instead of relying on security cameras, they incorporated a more sophisticated technology combination of smart sensors, AI, machine learning and data analytics.

Shah explains the shift. “Within schools, we can easily distinguish between different categories of people such as students, teachers, visitors, and delivery people. Schools are structured environments which makes is easy to map traffic patterns and identify movements within these categories that are out of the ordinary such as kids running or huddling. We can also flag specific students like those who have been suspended so if they show up on campus an alert is sent to the school resource officer.”

Shah and the Tembo team are still working on the way-finding portion of the solution for first responders. In its current form, the tool is best suited for school resource officers who know their schools and can respond to alerts following established training and protocol. However, Tembo does deliver a layout of a school building and athletic fields with a blue dot wayfinder that school resource officers can view on iPads or other tablets, desktop or smart phones.

Shah says Tembo is in its early stages, still developing a minimally viable product, and is in discussions with a Mishawaka, Indiana school district to do a beta test. Early discussions with schools have been positive, with valuable input on how to optimize the security solution.

One surprising input was that Tembo did not have to keep student identities private. School resource officers want the identities, which is secured from student smart phones.

Among the biggest challenges the company faces is recruiting a chief technology officer who can help identify the right technology. There are also ongoing discussions on how to position Tembo—is it a novel technology or a business model? Shah is also pursuing as master’s in material science at Northwestern University, which competes for his time. As questions are answered, plans to hit the fundraising trail will be finalized.

Fortunately, Shah is no stranger to pitching. In 2019, he and Kervick competed with Tembo in the McCloskey New Venture Competition and walked away with two awards—the Kem Krest/South Bend-Elkhart Regional Partnership Minority Owned Startup Award and the Palo Alto Software Award and $11,500 in prize money.

When asked what advice he would offer to other Notre Dame students considering starting companies right out of college, Shah offers this: “Investors invest in founders. They want coachability. Take the positive and negative feedback and think about why it was given. Both are valuable. Lastly, don’t get married to one idea; pivots are part of the journey.”