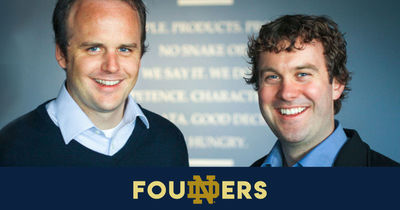 Braden Galbreath-O'Leary always wanted to go to the University of Notre Dame. When he didn’t get accepted, he headed for Penn State University, where he had a great time, but never lost his dream. Finally, just before the start of his junior year, Notre Dame gave him the nod and O’Leary was off to South Bend.

Patrick Hill also wanted to attend Notre Dame. When he wasn’t accepted, he enrolled in St. Andrews University in Scotland and kept applying to Notre Dame. Three applications. Three rejections. That’s when he changed his strategy and applied to do a year abroad at Notre Dame. It worked; Hill joined the Fighting Irish his senior year.

The transfers came together in typical collegiate fashion, through a roommate ad. Hill had moved off campus and needed someone to share the bills. Because of his late acceptance, O’Leary couldn’t get into a residence hall and responded to Hill’s ad. “We hit if off immediately,” recalls O’Leary. “We were both philosophy majors and we both liked the Dave Matthews Band. That was enough for me.”

Three weeks in and now fast friends, the two roommates were hanging out when Hill offered up a random prediction: “I can’t help but think we’re going to work together one day.”

And those philosophy degrees? Both agree it was an unconventional, but uniquely invaluable academic path. “It taught us how to think critically and ask why,” O’Leary explains.

Which does lead to the question, why—and how—did the two friends end up as co-founders of a highly technical water treatment company, one that is included on the Inc. 5000 list as one of the fastest growing environmental companies, ranked ninth and eleventh in 2019 and 2020 respectively?

It seems Hill made good on his prediction. After graduating from Notre Dame a year ahead of O’Leary, he joined a civil engineering firm focused on the design, build, and operation of wastewater lagoon treatment systems. The firm had developed technology for aerating water, a process used to control algae growth in retention ponds often found in neighborhoods. Hill convinced O’Leary to join him in spinning out a company based on the technology, with the engineering firm as a partner. In 2009, Triplepoint Environmental was open for business.

Armed with optimism, the co-founders faced significant headwinds. The water treatment industry was dominated by older, senior engineers. Most requests for proposals required five years of experience and five completed projects. With an 18- to 24-month sales cycle, it seemed Triplepoint’s sales pipeline was woefully dry. And then a break.

Recounts Hill, “We got our credit cards out and sponsored a booth at a national water treatment trade show at McCormick Place in Chicago. It was a turning point. We didn’t know how to sell or market, made some great connections and landed our first sale.”

O’Leary adds the two also learned how to sell. “We had new technology and our potential customers were risk averse. They’d try to pick us apart. We got really good at the science, learned to anticipate questions and have an answer for everything. We got so good at presentations, most people thought we’re engineers. One sale led to another.”

Triplepoint was founded without investors, and the co-founders made it a point to reinvest their profits in the company. In 2012, they faced a rocky year financially. With revenue cut in half, they cut ties with a former partner who didn’t agree with their path forward. “It really put us in a difficult position,” O’Leary says. “We couldn’t spend money until the partnership issue was resolved so we didn’t have money to meet our commitments.”

Fortunately, the crisis was temporary and Triplepoint returned to growth mode. The secret to their success has been a willingness to reinvent the company and create new opportunities. For example, their initial focus was smaller, stormwater retention projects for Chicagoland residential neighborhoods. The budgets were small and because of a lack of control over the water going into the ponds, customers were rarely completely satisfied. Switching to municipal wastewater treatment plants, first regionally and then nationally, was the answer as these are larger projects and the processes very data driven.

“Commercial wastewater treatment facilities know exactly what comes in and what goes out,” O’Leary says.

Hill and O’Leary have also made it a practice to speak on highly technical water treatment topics at dozens of conferences across the country such as the Water Environment Federation’s annual conference. They prefer to choose topics they know little about to build their knowledge base. In 2015, Hill was named one of Water & Wastes Digest’s Young Water Professionals to Watch. Not to be one-upped, O’Leary was named to the same list in 2016.

“What we’ve learned is to always stay hungry. What got us to our first $1 million year won’t get us to the next. We have to improve and innovate all the time,” Hill says.

The company’s watershed moment occurred in 2010 when they were installing their largest project ever, a 288-unit, seven million gallons per day capacity, wastewater treatment plant in Mississippi. Previously, their largest job had 18 units.

“I looked out over the jobsite and everywhere I looked were our aerators,” Hill says. “Meanwhile, Brady is back at the hotel bidding a job in Michigan for 440 aerators, which we won. I knew we were the real deal then.”

Although COVID-19 slowed some of their 2020 projects, people still need clean water for cooking, showers and toilets, so in many ways it’s still business as usual. O’Leary credits their ongoing success to their friendship. “We’re a good yin and yang. Patrick is the accelerator; he throws hand grenades. I’m the brakes; I catch the grenades. What makes it work is we have similar core values as a company and as people. We trust each other implicitly.”

Each has advice for future company founders.

Says Patrick, “The appropriate time to start a company is now. Most people want to wait until they’ve done one thing or another. You need to take one step forward and persevere.”

Adds O’Leary, “Don’t give up at the first sign of conflict. The answer to an issue or the next opportunity is not always visible. Keep learning and if you have the right partner, all the better.”