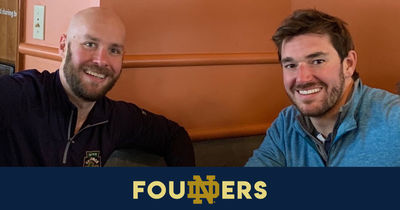 Spring break 2009 was a life changer for Evan Wray. Then a freshman at Butler University, he thought he was going for some fun. Little did he know he would meet the person with whom he’d launch three companies, score a multi-million exit and forge an incredible friendship.

Wray had already submitted an application to the University of Notre Dame as a transfer when he traveled to Florida with his roommate. The two were meeting up with two Notre Dame students, one of whom was a childhood friend of Wray’s roommate.

“That was when I met Sean O’Brien,” recalls Wray. “We were yin and yang. I was a football player and dreamed of becoming an entrepreneur. Sean was more practical and planning on law school. We hit it off and became friends once I got to Notre Dame sophomore year.”

Wray was a walk-on for the Fighting Irish football team, playing outside linebacker. He also boxed in Bengal Bouts, winning his first match before “retiring” undefeated with a concussion. By senior year, he was sharing an off-campus apartment with O’Brien as well as hatching ideas for startup companies. O’Brien listened patiently and offered feedback. Finally, after what seemed like the one hundredth idea, O’Brien gave thumbs up. The idea? Selling emojis, the now ubiquitous digital graphics used in text messages, social media and web pages.

Wray puts his vision in context. “IPhones came out in 2007 and by 2012, many college students all had them. Messaging platforms came with simple emojis—smiley faces, thumbs up and the like. I thought we could capture Irish fandom by selling university-themed emojis like the leprechaun, shamrocks and the Dome. The next step would be other universities.”

With O’Brien onboard, Wray named the company TextPride (later changed to Swyft) and began writing a business plan.

The eager entrepreneurs didn’t know what they didn’t know. Soon after developing their Notre Dame emojis, they got a call from the University’s licensing office and learned if they wanted to use Fighting Irish icons, they’d have to license them first.

Wray smiles at the memory. “We had created an entirely new category of licensing, mobile digital assets. Universities didn’t know how to price it so we got really good licensing deals. Which helped as we didn’t have much money to get our company off the ground.”

Motivated by the saying “Don’t be afraid to reach out to the highest of the high,” Wray and O’Brien approached legendary university football programs such as Alabama, Texas and Wisconsin. They all agreed to participate.

The two began planning an official launch, but in the meantime, graduated from Notre Dame in spring 2012, but not before competing in the McCloskey New Venture Competition. Wray headed for a job in Silicon Valley with a tech company, while O’Brien’s plan was to attend Fordham University’s law school on scholarship. However, divine intervention led to a change in plans.

“I had a great job, but I resigned after a month to work on Swyft,” Wray says. “Sean decided to defer law school and joined me in San Francisco to work on our app and licensing deals.”

A friend’s father’s $100,000 investment provided the rocket fuel needed for a fall 2012 launch. Wray recruited football friends to Tweet about Swyft’s team emojis. The launch appeared to be a success; Swyft scored 100,000 downloads of its emoji packs. The trouble was, retention was terrible. Few users returned to the app.

The hard lesson led Wray and O’Brien to move to New York City. With just $10,000 of the original investment in their kitty, failure seemed imminent. While people loved their emojis, they didn’t like the platform. So Wray and O’Brien pivoted to partnering with established messaging apps like GroupMe and Viber. The business model was a simple revenue share; users paid two dollars per emoji pack, of which Swyft made 30 cents.

Swyft finally had market traction, ultimately partnering with upwards of 30 messaging apps and securing a network of two billion users. They had licensing deals with sports and entertainment giants like NFL, NHL, Disney, and MGM. What happened next changed their revenue model and the trajectory of their lives.

“Sony Pictures came to us and said they were launching a movie and wanted to give movie-themed emojis away for free as part of its digital marketing effort. They asked us how much we would charge. Not knowing what a good price was, we threw out a large number of $250,000. Sony, to our surprise, agreed. That’s when we went from selling emoji packs to becoming a media platform for brands. It was an ah-hah moment. Disney, Universal Studios, Ford Motor Company, Starbucks, and MillerCoors all came to us,” recounts Wray.

Says Wray, “It was a week before my 25th birthday and here we were negotiating an exit to a publically traded company. There were a lot of really happy people, including my friend’s dad who realized a 45x return on his original investment.”

The two remained with the company for two years, traveling the world and partnering with over 300 leading brands in North America, China, Japan, Israel, Europe. In 2017, both Wray and O’Brien were recognized among Forbes’ 30 Under 30 for Advertising and Marketing.

Not ready to ride off into the sunset—they were, after all, only in their twenties—Wray and O’Brien founded Irish Beef, an Arby’s franchise in Tucson, Arizona in late 2016. They applied their digital marketing skillset to the traditional industry, ultimately exiting in 2018 to a private equity group after becoming a top growth franchisees in the nation. The question then became, what next?

Wray joined Trail Mix Ventures in New York City as a venture partner in 2017. While evaluating deals, he became intrigued with direct-to-consumer online retail companies. and the problems they faced as they grew. Eventually he, O’Brien and a third partner, Peggy O’Flaherty, launched Mavely, a social e-commerce platform Wray believes will help solve a major problem in the online shopping space.

“I’m really excited about Mavely because we’re changing the conversation and dynamic of online shopping, which is dominated by Amazon and big box retailers. Our model is ‘social shopping.’ We’ve curated a collection of over 200 unique, female-founded brands that value sustainability and use our platform to connect with buyers on a more personal, friend-to-friend level,” Wray says.

“What makes Mavely unique is our customers earn cash back on anything they buy and commission on anything sold to friends, family and their social followers based on their recommendation. This helps brands reduce the cost of customer acquisition and puts money in the pockets of the women and families who are both customers and influencers,” he adds.

While Mavely is new, it’s captured the attention of brands, women and media, including Modern Retail, Retail Dive and Business Insider. Though totally different from emojis and fast food, Mavely has something powerful in common: two loyal friends and partners, Wray and O’Brien. Says Wray of the duo’s entrepreneurial journey, “I get us to jump off cliffs; Sean builds the parachute. It works.”

In closing, he offers this advice to young entrepreneurs: “You can’t get a cookie unless you ask for a cookie, so don’t be afraid to approach the highest of the high. Ask for the appointment. Ask for the contract. Just ask. When you do, amazing things will happen.”