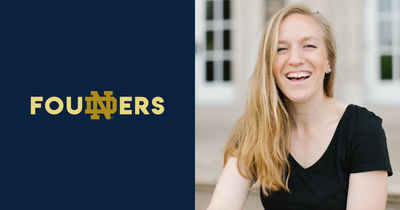 MK Andersen is all about small businesses. More specifically, she is unabashedly all in on weddings and particularly if they involve University of Notre Dame alumni.

The founder of Your Day by MK, a Chicago-based wedding consultancy, the gal has the Irish Catholic vibe going on. Her website is enough to bring tears to the eyes of every bride and her mother seeking a kindred spirit in keeping an impending wedding on track:

I suffered through plaid skirts and Irish dance lessons with the best of them—and still found myself at Notre Dame for school, so of course I became a big ND (tailgate) fan, GIRISH! The details and traditions and parental expectations of Catholic weddings? Girl, I got you.

The wedding planning bug bit Andersen while a freshman at Notre Dame. Seemingly following in her mother’s footsteps—her mother is a retired judge in Chicago who earned her undergraduate degree and law degree from Notre Dame—Andersen was a political science major. She joked with her roommate that she was actually going to be a wedding planner.

“My family loves a throw a good party,” admits Andersen. “People typically go to Notre Dame to be financiers, lawyers and doctors. I learned how to build lasting relationships during college and then went my own way with what I learned.”

Her way involved doing a shadow weekend with an Atlanta wedding planning company, which cemented her dream of owning her own business. Andersen looked into buying a franchise, but the ten-year commitment caused her to pause.

“What does a 22-year-old know about what they want to be doing in ten years? My parents encouraged me to start my own wedding planning firm. It made financial sense as I had little overhead. I would be in charge of the direction of the company, and if I decided not to continue, there would be no repercussions,” she says. “So I went for it.”

Immediately after graduating from Notre Dame in 2017, Andersen started Your Day by MK. She bankrolled the company with savings from jobs during her college years and earned grocery money by walking dogs. It didn’t take long for her to book three weddings, two of which were for sisters.

“The first sister was a high school friend’s sister. Two weeks before the wedding, her mom said she didn’t want to be in charge on the big day and hired me. A few months later, the same family hired me for the other sister’s wedding.”

Andersen’s third wedding that year was for Notre Dame graduates who had a church-to-reception event. At that point, Andersen felt completely in her element. She began consistently chatting with Notre Dame alumni in her grassroots social media marketing and word-of-mouth efforts. She admits she has no shame being that annoying person on Notre Dame alumni social media pages. Because of referrals, Andersen has not had to do any paid marketing.

“At first Notre Dame weddings were a treat, but unintentionally they turned into a niche. I understand that Catholic weddings are not typically at five in the afternoon. I get that we often have to pause between the ceremony and reception. I laugh with my couples about our Catholic upbringing and talk football with their parents. Then I get to work and make sure their day is perfect,” she says.

Three years into Your Day by MK, 80 percent of the weddings she books are church weddings. Her Notre Dame base has been augmented by graduates of Boston College and Loyola University. “Catholics have big families,” says Andersen. “It’s great because someone is always getting married.”

Business was so good in 2019 that Andersen hired an associate to help orchestrate wedding days so she could spend more time on strategy, marketing and accounting. Then COVID-19 and the economic shutdown struck and wedding after wedding was rescheduled. Undaunted, she persevered and continued walking dogs for extra cash and sanity.

“I did freak out a little and wondered if I needed to get a ‘real job’ with insurance. My partner encouraged me to look at all that I had accomplished, and I’d see that I did have a real job, just a bit different than before,” she says.

The wedding business has started to rebound. While many of her large weddings have been postponed until 2021, there is still planning to be done re-booking venues and other arrangements. In July, she did a 30-person wedding and sit-down dinner. It would seem to be a simple event to plan, but because of the new regulations and safety precautions, the event was incredibly complicated. Andersen pulled it off without a hitch.

And while COVID-19 has been interesting to navigate, her biggest challenge is working alone. “There’s no one to mentor me or guide me through tough times like at larger corporations. I get to do it all and figure things out along the way.”

Andersen is thankful for her Notre Dame pals, the support of her parents, the flexibility of her chosen career, and Schubert, the Golden Retriever she’s walked for three years for his exercise and her needed daily break. She is quick to offer this advice to other young people who want to become entrepreneurs.

“Startups come in all forms; find a problem and come up with a solution. Apps get attention, but traditional businesses are also rewarding. Do your calculations, humble yourself, and understand it doesn’t happen overnight.  If this is the life you want and you’re happy, do it.”