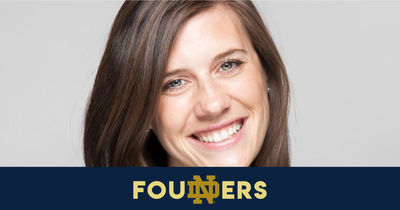 Laura Rokita was never particularly interested in computers, let alone programming, until her sophomore year at the University of Notre Dame. A business major, she was required to take a computer class and build a website. To her surprise, she was a natural at coding. A year later, Laura switched her major to IT management. Upon graduation, she went into IT consulting.

Says Rokita, “My computer skills opened doors for me.”

Among the first of those doors was a position with Chicago business incubator, Sandbox Industries. While there, Rokita served as a financial and investment analyst, managing Sandbox’s portfolio and gaining insight into financial and operational metrics of startup companies. She also learned how to work with engineers, scientists, marketers and others to launch companies. The experience would serve her well.

Several years later, after earning an M.S. in computer science from the University of Chicago, Rokita moved to New York City to take a position with Google.

“One of the unique benefits of working for Google is a program called Area 120 that encourages entrepreneurship. Employees can pitch a startup idea to Area 120. If accepted, Google pays Area 120 entrepreneurs to work on their idea for six months and sometimes longer,” Rokita explains.

Intrigued by the opportunity, Rokita and a co-worker pitched the idea of an app to improve users’ experience with mass transit. Google liked the idea. In 2017, the Pigeon Transit app was born. Rokita laughs when asked what inspired the company’s name. “Pigeons are city birds just trying to survive and they fly fast from point-to-point.”

And that’s exactly the point of Pigeon Transit: how to get urban commuters from point A to point B as quickly and as comfortably as possible. Rokita and her colleague threw themselves into building the crowd-sourced app. When their initial six months in Area 120 was up, Google continued its support.

Fast forward to 2020 and the Pigeon app is now available on the App Store and helping users avoid delays, crowds and construction while using a city’s subway, bus, train and ferry systems. Fellow Pigeon users generate the real-time updates that keep the commutes of others moving. Says Rokita, “Until now, urban commuters have been on their own. Pigeon is changing that.”

Even with Google’s support, Rokita says life as an entrepreneur isn’t easy. Among the biggest challenges she’s faced is building and maintaining a cohesive team culture. “You can’t build an app, let alone a company, alone. You need good people working with you if your company is to endure and thrive.”

After two years of working on Pigeon’s brand awareness and building its user base, Rokita’s biggest reward is having an impact on the lives of others. “Seeing people on the street using the app gives me the biggest smile; it’s amazing to know you’re helping people.”

The persistence of Rokita and the Pigeon team is paying off. The app is now available in six cities: Boston, Chicago, Los Angeles, New York City, San Francisco and Washington, D.C. In the spirit of being a crowd-sourced app, fans can go to the Pigeon website and vote for the next city for expansion. It seems wherever urban commuters have an issue the Pigeon app will find a welcoming roost.

Rokita credits her family and Notre Dame for the motivation to help others that drives her. “For me, if I am going to dedicate years of my life to a company, it has to contribute to the greater good. “

And to those who want to be entrepreneurs, she says, “Try to solve problems you’re passionate about and start as soon as you can.”