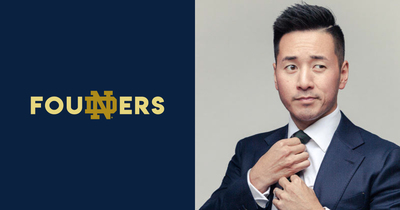 Ge Wang’s respect for his father runs deep. The elder Wang immigrated to the United States from China, speaking no English and with just forty dollars in his pocket. He waited tables before earning a college degree and then a coveted spot as one of Father Ted Hesburgh’s first Chinese law students at the University of Notre Dame.

“When my father was accepted at Notre Dame, my mother and I finally joined him from China. From ages five through seven, I lived in South Bend. You could say Notre Dame runs in my blood,” Wang says.

When it came time for Wang to choose a university, he seemed destined to follow in the footsteps of his father, a successful Chicago attorney. He earned his undergraduate degree from Notre Dame, a law degree from DePaul University and began practicing real estate law. Everything was going as planned, but whose plan?

“As the child of immigrants, expectations are high. There are three acceptable careers paths: law, medicine or engineering. I went with law and pretty quickly realized my true passion was clothing. I would flip through GQ and think, ‘Why don’t my suits fit like this?’ I decided to leave law and start ESQ in Chicago with the basic principle of creating better garments for men,” he says.

Wang’s parents were supportive, thinking youthful dreams would run their course and he’d eventually return to law. Eight years later with a new flagship retail showroom on LaSalle Street in Chicago’s financial district, ESQ has become the premier source of bespoke and custom menswear for titans of business, professional athletes, and others needing the right look and fit for a wedding, college graduation or first promotion.

As with most startups, success has not been a straight path. When Wang launched the self-funded menswear business in 2012, he used manufacturers similar to those of other clothiers, but wasn’t happy with the results. While the suits and shirting were presented as custom made, they weren’t much different from what already existed in the marketplace, which to Wang was not saying much.

“I learned quickly that most custom suits are not really custom. They’re cut based off of a silhouette designed to fit most body types. Like most things off the rack, something designed to fit most fits none at all. The salesperson can add or tweak an inch here or there to create a ‘custom’ fit, but at the end of the day, the cut of the suit doesn’t seem distinctly British or Italian, but rather just seems made in Asia. That’s not what I wanted for ESQ,” Wang says.

Thus began a deep dive by Wang to understand the inner workings of menswear. Since 2015, he’s visited more than 180 suiting, shirting, and fabric manufacturers around the world, primarily in Huddersfield, England, Italy and China. This led to an intrinsic shift in the company. Wang refocused the brand on making the best garments possible.

Wang explains. “We have our own team of designers and tailors and design a truly bespoke pattern for each client. This means our English silhouette looks like it was made in London, our Milanese silhouette looks made in Milan, our Neapolitan in Naples, and our Roman in Rome. We also source the top fabrics globally, and hand sew each and every visible stitch to not just create the best-looking garment, but one that moves with one’s body as well.”

He adds, “We make clothing that is designed to look and feel right on the individual, not just the six-foot-one, 160-pound model in a magazine.”

In an increasingly online world, where whatever one wants is but a click away, Wang’s business model is very much old school. While walk-ins are welcome at his bricks-and-mortar storefront, 90 percent of sales of suits, shirts, trousers, and overcoats are made via face-to-face, by appointment only consultations. Wang say this is by design and also out of necessity.

“ESQ is very much analog in a digital world and I much prefer it that way. I strongly believe in the importance of building relationships. Once we have someone’s measurements and their pattern is cut, it’s easier to show them new seasons of cloth via email, but we much prefer to see our clients in person,” he says.

The biggest challenge Wang has faced is COVID-19. National stay-at-home orders preceded the planned grand opening of Wang’s new half-million-dollar showroom by a month. With people quarantined at home, in-person consultations were put on hold and weddings that had been booked for months were canceled or postponed, sales plummeted. Fortunately, as of early July, customers are returning to ESQ and sales are on a steady uptick.

Wang remains optimistic and steadfast to his goals for ESQ and custom menswear. “Throughout the pandemic, I’ve been able to keep my staff safe, both from a health and monetary perspective. I also believe we are well positioned for the future. While athleisure will dominate the menswear market moving forward, those seeking a professional, whether it be an attorney, wealth manager or investment banker, will expect that individual to dress the part. Fashion, especially the luxury menswear market, will be much more so about quality over quantity.”

While he believes you make your own luck, he credits the mentorship of his parents and the support of his wife with his success. “Entrepreneurship is extremely rewarding. Everything you get from it is quantifiable by the time and energy you put in. The older I get (he’s 34), the more I realize the importance of time. If entrepreneurship is something you’re passionate about, give it all that you have. Life’s too short for regrets.”