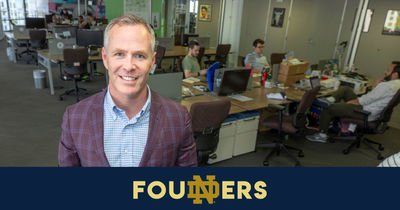 Brendan Mullen’s boyhood memory is vivid. He’s pushing a lawn mower across his family’s South Bend yard when the roar of the crowd a few miles away at a Notre Dame football game breaks his concentration. In that moment he knows he’s going to Notre Dame, preferably on a football scholarship.

Throughout high school in South Bend, he perfected his kicking game. By his senior year, Mullen was known for his fast leg and big kicks. Coaches from across the country were recruiting him. The one coach who didn’t knock on his door? Irish coach Lou Holtz.

“The only school I wanted to play for was Notre Dame and when Coach Holtz didn’t call, I called him. I dropped off tapes to him and to his assistants. Nothing. They didn’t need another kicker,” Mullen recounts.

Out of the blue, his high school guidance counselor called him to the office. Coaches from the Army football team had come to see him. Their pitch: If you can’t play football for the Irish and Coach Holtz, then come to West Point and play against them. Impressed, Mullen signed a letter of intent.

“Months later, I had a shaved head, and was shining boots at 2:00 in the morning, questioning my life’s decisions. But ultimately it was the best decision I could have ever made. Attending West Point and kicking for the Army football team for four years was a path I never anticipated, but one I cherish.” Mullen recalls.

After graduating from West Point, Mullen moved from the gridiron to the battlefield, serving in the U.S. Army for five years as a combat engineer officer. This included a stint in Washington, DC, where he supported the White House and Naval Observatory, serving President George Bush. He was ultimately deployed to Iraq in support of Operation Iraqi Freedom as a Military Transition Team member, where he earned the Combat Action Badge in 2006.

That same year, Mullen traded the military for civilian life, joining forces with a fellow West Point classmate and Operation Iraqi Freedom veteran in a cyber security startup. When Mullen joined the company, he was the first employee and chief operating officer. When he left three years later to launch his own startup, MKS2 Technologies, the consultancy had grown to over 105 employees and $12 million in products and services.

“I wanted to hang my own shingle in the cyber security consulting space and try things my way using the leadership skills I developed in the military and the contacts I had in Washington DC and Virginia. While I don’t have a computer science background, I’m very effective at building teams and scaling companies,” he explains.

Mullen is also a good judge of talent. Building the leadership team of MKS2 Technologies from the ground up, he turned to former colleagues and classmates.  He first recruited his former U.S. Army Platoon Sergeant from his days serving the George Bush White House, Steven Hall, as vice president of operations. He hired a former West Point classmate away from Tesla, and he hired a Notre Dame MBA classmate, Angela Aspito, as MKS2’s vice president of strategy and growth. Additionally, he made it a point to hire military veterans. Today, one in four MKS2 team members are former military.

“The majority of our clients are in the defense and military industries, and we lean into the fact that we’re a ‘battlefield to boardroom consultancy.’ We hire veterans because it’s the right thing to do and those who serve are often cut from the same cloth, with true north values of loyalty, duty, respect, selfless service, honor, integrity, and personal courage,” he says. “Our people are the real deal. They have a raw passion for service.”

From the beginning, MSK2 Technologies, a Service Disabled Veteran Owned Small Business, was self-funded. In 2008, Mullen purposefully walked from his condo in Washington D.C. to a Wachovia Bank and deposited a $250 check. He won the first government contract he competed for and literally hasn’t looked back. MSK2 Technologies now provides cyber security professional services, software development, instructional design, and enterprise application development in 38 states, DC, and Puerto Rico to the U.S. Department of Veterans Affairs, the U.S. Department of Defense, and three branches of the military (Army, Air Force and Navy).

“When I started the company in 2008, I was the product. Today, it is the team and our track record that continues our trajectory. We are a closely-knit team of more than 160 incredibly hardworking and smart people, many who have security clearances. We have a lot of grit, ambition and hustle in this company, but centered by a team-first and family-first mentality,” Mullen says.

In the midst of his startup success, Mullen returned to his beloved Notre Dame in 2012 to earn a master of business administration from the Mendoza College of Business’ executive MBA program.

“I had just lost a congressional race in Indiana by one percent. It was like getting stopped on the one-inch line as you’re trying to score the winning touchdown. My wife and I talked around the kitchen table about running for office again and it didn’t make sense for our young family. What did make sense was earning an MBA from Notre Dame. Even though I had started a company and was very successful at growing startups, I didn’t have the depth of understanding the nuances of building a great and sustainable business,” Mullen explains.

Over the next 21 months, he dedicated himself earning his degree while continuing to lead MKS2 Technologies. Upon graduation in 2015, Mullen received something more than a sheepskin. “The Notre Dame methodology allowed me to think through who I was as a man, a father, a leader, and as an entrepreneur. I am a much better person for it.”

Despite the national challenges posed by the coronavirus pandemic, Mullen says the need for cyber security continues to grow and his company is on track to exceed its revenue goals. Crediting grit, timing and luck for his success, he offers this advice to future entrepreneurs:

“Make your own luck by being open to advice and new opportunities as they come. You can have all of the wonderful ingredients but if you don’t have good timing and a small dose of good luck, often you’re sunk, and there’s nothing you can do about it, so stay positive and remember to smile and laugh often.”