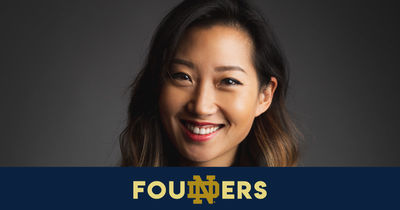 Grace Choi credits her immigrant parents with teaching her how to “stomach risks.”

Her most recent risk is launching a startup called Cookable aimed at revolutionizing how people prepare foods and beverages and in so doing, discover the deeply enjoyable, social and cultural aspects of dining.

Before embarking on her entrepreneurial journey, Choi took a risk on the University of Notre Dame, a school she knew very little about and worlds away from her family’s home in northern Virginia. “I applied to 14 schools—some Ivy League, some state schools, a few Catholic. I had no intention of going to Notre Dame, but the application was the most interesting. It had questions on morality, which made me think,” she recalls.

The spring of her senior year in high school, Choi was invited to visit Notre Dame with other minority students from around the country, not realizing she’d been accepted for the fall semester. On the bus from the airport to South Bend, she saw the rolling farmland and pigs for the first time and wondered what she’d gotten herself into. She needn’t have worried.

“The visit blew me away. I loved the spiritual component; it was imbued in everyday life. Classes started with a prayer. Morality, spirituality, ethics, and service were at the core of everything,” she recalls. “I enrolled.”

Choi has always had a fascination with food. When she was young, her mother would buy cases of Spam at Costco. Embarrassed, she asked her mother why Korean Americans ate so much Spam. Her mother shared that after the Korean War, the country was very poor. U.S. soldiers sold Spam on the black market and it became both a staple and a comfort food for Koreans. This food story had a profound effect on her as it underscored the social and cultural power and intimations of food.

While her economics and theology courses at Notre Dame nourished her mind, the university’s dining halls nourished her passion for food. She and her roommate would scan the menu at the beginning of the week, planning their meals. When she had visitors, she’d proudly take them to the dining hall. Choi joked with her roommate about being on the Food Network.

After graduation, she moved to New York City, landing a position with a telecom company. A colleague was attending the French Culinary Institute—now the International Culinary Center—part-time. Choi’s dream of being on the Food Network had intensified and it killed her not to be attending the famed cooking school. “My mother told me cooking was a hobby not a career. Even so, she and my father co-signed a loan so I could attend.”

The French Culinary Institute was grueling. While putting in 65 hours a week at the Institute, Choi was also working 35 hours a week as a dean’s assistant. The stress gave her daily nosebleeds. To complete the program, she had to do an externship at famed New York City restaurant per se where she developed a deep appreciation for chefs. “Working in a restaurant takes a different kind of genius. Chefs don’t have college degrees, but they are geniuses all the same.”

Although she loved the chaos of per se, Choi left to accept a position as a sous chef and cookbook writer with an award-winning vegetarian restaurant in Umbria, Italy, The Country House Montali. While there, she discovered her heart was in the people and their food stories.

Her return to the United States led to a new risk, pursuing a PhD in food studies at New York University. For the next eight years—her first year was spent in the masters program—Choi dove into a highly rigorous, interdisciplinary academic program studying how, what and why people eat.

It was during these intense years working on her PhD that Choi unexpectedly realized a dream from her Notre Dame years. Broke, she applied for a bartending job. While sitting in the bar, she struck up a conversation with a woman who worked for the Food Network and whose sister was a casting director for the Next Food Network Star. “She asked me if I would like to come in for an audition and I said no. So she encouraged me to submit an audition video,” Choi says.

Unwilling to let the opportunity pass, Choi submitted a video. Her dish? Fried rice with garlic eggs and Spam. She smiles at the memory. “My identity as a Korean-American is tied to this product,” she says simply.

Time passed. She received an email inviting her to meet with producers. While they were blown away by her video, they didn’t have a spot for her. Choi was shattered.

The story doesn’t end there. Two years later, Choi was invited back and asked to star in 15 segments of her own show, Cooking with Grace, for the Cooking Channel. “I understood the mindset of novice cooks,” she says. “And that came through to the producers.”

The television experience checked off a big box, but her doctorate demanded her full attention. In 2014, Choi was awarded her PhD. Instead of heading to a classroom or research lab, Choi embarked on her biggest risk of all: starting a company. “My PhD gave me the confidence to embark on the life of an entrepreneur. Presenting one’s dissertation is incredibly hard. It made starting a company much more doable,” she explains.

Her inspiration for Cookable came from her culinary journey and an unlikely source, her virtual assistant Alexa. She had narrated recipes for the Food Network and thought, “Why not create an Audible for recipes that integrates video with real-time conversation with Alexa to create a transformational experience?”

Choi pondered the question, believing the standard recipe format of ingredients and directions to be fundamentally flawed. Traditional recipes assume people understand a litany of tasks, how to chop onions or separate eggs for example, leading to less than stellar results. Too, recipes don’t provide emotional context to cooking. Thus, she re-imagined the architecture of recipes and married it with virtual assistants to bring storytelling into the process and make cooking at home both joyful and informative.

Part of Choi’s motivation behind Cookable is that cooking has been over technologized and productized. Popular items like Instapots and meal kits emphasize convenience while eliminating the need for intuition. “Companies assume people don’t like to cook so they’ve created all of these gadgets and kits to simplify the process. Yet cooking is more mystifying than ever,” she says. “We need to return to the social significance of foods and enhance the overall experience of cooking and eating.”

In January, Choi conducted a beta test of Cookable with 20 friends and family members to get a sense of the experience, if the video and Alexa interface brought recipes to life, was enjoyable and engaging, and if the test cooks achieved better results.

“Our beta testers found the experience overwhelmingly positive. The process invited more questions from the cooks and the food they prepared was wonderful,” she shares. “Even my husband, who can’t cook, followed Cookable and made a delicious dish.”

With this validation, Choi continued her work on Cookable with the goal of a summer 2020 launch. Then the unexpected happened: the coronavirus pandemic and subsequent global shutdown and sent many Americans home from work.

“As a result of the pandemic, people who were afraid to cook or didn’t have time began cooking more than they ever had before. They were also ordering in food from restaurants, losing the enjoyment of eating out. There was an opportunity to foster a love of cooking, which Cookable supports by enhancing confidence and curiosity about food,” she says.

Recognizing a Black Swan moment, Choi and her development team accelerated the launch of Cookable. Instead of waiting until June when she had a more expanded stable of chefs, mixologists and cookbook authors, Cookable launched in April with an introductory website. At this writing, the site includes three storytellers, including Choi, who provide a taste of what’s to come with fun, mouth-watering teaser videos of raspberries and cream pavlova, the crispiest, juiciest, oven-baked wings and a classic daiquiri.

Meanwhile, work on the Alexa integration continues so that users can soon enjoy the complete Cookable experience of being guided through recipes and their stories with the ability to ask questions and have fun with food and all of the social aspects surrounding it. Choi also hopes to recruit more chefs to the Cookable platform, giving them a new revenue stream from potential sponsors and followers eager for their knowledge and personal insights.

Choi never imagined herself as an entrepreneur thus her advice for others is about finding one’s way in life, which isn’t necessarily easy.

“I spent a lot of time waiting for something to fall into my lap. I went to culinary school and didn’t want to be a chef. I earned a PhD and didn’t want to be an academic. Cookable, something I created for myself, became the vocation I was searching for,” she says. “It has challenged me more than anything in my life, yet I can’t imagine a more worthwhile endeavor.”

Choi adds, “Sometimes an opportunity to change the world is right in front of us.”