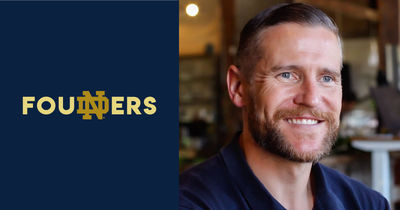 Ben Deda has a deep appreciation for communities and the support and encouragement they provide. He found a strong sense of community at Notre Dame, the only university to which he applied. He found it among his classmates in the mechanical engineering program, where he learned to appreciate systems thinking. He also found it in the Naval Reserves Officer Training Corp, which led to seven years in the U.S. Marine Corp post graduation.

Deda also has a passion for starting companies. “I can’t think of a better foundation for entrepreneurship than the Marines, whose traditional mantra is ‘Improvise, adapt and overcome,’” he says. “The focus on making decisions and providing leadership in an uncertain, dynamic environment maps well to the world of startups.”

The former Marine was able to combine the two while working with a startup company called FullContact that had recently completed the Boulder, Colorado Techstars Accelerator. Founded in 2007, the program is the original Techstars accelerator and its 150 mentors have helped over 150 companies take their business to the next level.

When FullContact relocated to Denver in 2012, Deda didn’t immediately find the same sense of community, even though there were a number of successful tech companies. “I saw great companies doing great things, but they kept their head down on work and didn’t necessarily look up to see who was right next to them.” Deda and some other Denver startup leaders convened at a local bar to discuss what they could do to bring together the local startup community. It seems they weren’t the only one’s interested in expanding the Mile High City’s entrepreneurial scene.

“The founding of Denver Startup Weekend was kismet. At the same time my eventual co-founder, Erik Mitisek and I were meeting, Tami Door, CEO of the Downtown Denver Partnership, was exploring similar opportunities. The three of got together—and behind—the idea of a free, community-wide celebration of entrepreneurship,” Deda explains.

Just like a traditional business startup, Deda and his co-founders had to do a “proof of concept’ to attract sponsors. With the help of a small group of volunteers, a small venue was secured for a kick-off test program. More than 1,000 people flocked to the event and Deda knew they were in business.

“There was definitely a hunger in Denver for a more formal startup community,” he says. “We just had to create the box, recruit sponsors, find locations, and then leave it up to the community to fill the box with programs and events that would bring us all together.”

What made Denver Startup Week special from the beginning was its inclusiveness and the fact that all events were free. The mission was and remains to celebrate great companies, innovation, ideas, and people.

“Going in, we had three simple goals,” explains Deda. “Build a community for entrepreneurs, provide education to support them and their startups and put a spotlight on Denver and creative businesses.”

With this simple roadmap, the first Denver Startup Week, held in October 2012, was a resounding success. The founders raised over $100,000 from sponsors, hosted 100 events and attracted more than 2,000 registrants. “It was great to see the Denver community some together,” Deda says.

Since then, Denver Startup Weekend has continued to expand its reach and include ever more volunteers, events and participants. In 2019, the event hosted 350 programs and events across the city, attracting 20,000 participants. The organization keeps the energy going throughout the year through its website, blog and formal and informal networking."

Deda attributes the success of Denver Startup Weekend to three things: timing, luck and the “give first” mentality of the State of Colorado.

“There are so many newcomers to Denver, Boulder and the state at large, that everyone is tremendously welcoming. The question asked almost universally is, ‘What can I do to help you?’ And it’s sincere; people want to help each other succeed. That’s really the secret to our success,” he says.

Since co-founding what has become the nation’s largest free startup event, Deda was the COO at the learning community startup Galvanize, which was recently acquired for $165MM, worked with Vista Equity Partners portfolio company, Vertafore, and is now CEO of FoodMaven. FoodMaven is creating a more efficient marketplace for food, including locally produced produce, dairy and meat, and restoring local food systems to make the business of food more sustainable and profitable for producers and sellers.

“Think of it as a food supply chain with a conscious,” Deda says. “FoodMaven makes it possible by leveraging the efficiencies of an online marketplace, big data optimization technology, and an agile logistics model. And all of it is good for people, the planet and profits.”

Colorado-based FoodMaven is now in the process of expanding into Texas, with the ultimate goal of a national footprint. Despite the demands of his day job, Deda remains active in Denver Startup Weekend. In light of the coronavirus pandemic and need for social distancing, he and the cadre of volunteer organizers are working on re-imagining the September event to include virtual programs and smaller live events.

Deda says events such as Denver Startup Week are critically important because of the role they play in building communities.

“Startups can be isolating, particularly now when we’re being instructed to social distance. Too often, people working in high-stress, high-growth businesses feel alone and find it hard to connect with others in their shoes. We’re here to say, ‘You’re not alone. Join us! The people you meet could be your next great hire, your next investor, your next great friend,” he says.

“That’s what community is all about.”