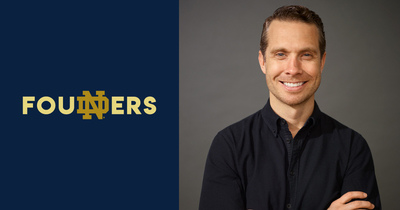 Funny how the little things can unleash a passion. In 1995, Ryan Welsh’s grandmother gave him ten shares of SAP stock as a gift. He was grateful, but not overly impressed. It’s understandable; he was only in middle school.

All that changed a year later when Welsh saw his stock double in value; he made $300 without doing anything. Suddenly intrigued—and highly motivated—he began trading stocks and kept at it throughout high school. When he finally sold his grandmother’s gift, SAP was worth $72 a share.

Welsh smiles at the memory. “Trading securities is the ultimate competition, and I’m a very competitive person.”

He was—and remains—a wicked smart individual. After earning a master of science in applied mathematics and economics from Rutgers University, Welsh decided to pursue a master of business administration (MBA) at the University of Notre Dame’s Mendoza College of Business. The deciding factor to “go Irish” rather than an East Coast MBA program was the University’s deep and inclusive alumni network.

“Without Notre Dame and its alumni, I would not be where I am today. My career and now my company is built on the Notre Dame network,” he says.

A self-described macro thinker who likes big themes, Welsh wrote his 2013 investment thesis—his personal take on where the world is going—after analyzing the 2008 crash of the U.S. financial market. His belief is that by 2025, every worker will be partnered with an AI assistant and rely upon AI-powered workflows to do their jobs.

“The Industrial Revolution has been replaced by a Knowledge Revolution fueled by artificial intelligence. The amount of data we’re expected to consume and use in our jobs today has exploded yet we can’t read or comprehend information any faster than our parents or grandparents…we are the bottleneck in the modern production process,” he explains. “This opens the door for disruption.”

Machine intelligence, generally referred to as artificial intelligence or AI, is considered the path forward. However, since the term was coined in 1956, machines still don’t understand the meaning behind the data being processed. Welsh is changing that notion.

“Current natural language processing and machine learning only go so far,” Welsh says. “The problem is machines don’t have the ability to understand semantics, the meaning of words. Nor do they understand pragmatics, the intended meaning behind words. We have to teach them. And when we do, they will be more like humans and capable of doing more,” Welsh says.

Welsh and technical co-founder Arun Majumbar, an expert in AI, had a solution in mind when they launched their startup in 2014. The two were riffing on names and liked the sound of Kyndi, a derivation of a West African word. Only later did they discover that Kyndi means “someone with the capacity for thinking and reasoning,” the exact qualities the two sought to imbue in machines.

Although Welsh characterizes Kyndi’s first year as “a bunch of pointy-headed scientists starting a company,” he is quick to point out that the company has always been laser focused on solving customer problems. Productizing their technology was a priority. “Deep tech companies can tinker forever; we didn’t have that luxury. Chief information officers aren’t buying AI, they’re buying a product powered by AI that delivers a solution.”

Kyndi’s solution is patented artificial intelligence (AI) technology that fuses together many AI paradigms, a technique that now has become known as Neuro-Symbolic AI. It is redefining the paradigm of AI and machine learning and, in the process, revolutionizing how the federal government and major corporations answer their hardest questions about their organizations, industries and global issues. Kyndi enables organizations to automate many of the reading tasks people perform every day. The technology is auditable and explainable meaning that its AI systems can justify, or explain, the reasoning behind their conclusions and results.

If all of this sounds amazing, it is. But five years ago, when Welsh began making the rounds of Silicon Valley investors and analysts, no one was buying it. “While they were onboard with what I was saying, they didn’t accept our technique of explainable AI. What we were doing was totally different from accepted beliefs and some thought we were crazy. One VC wrote in the New York Times that explainable AI was not necessary.”

Against these head winds, Welsh persevered. “Our challenge as a startup is bringing a new product to a new market. It’s far easier to bring a new product to an existing market because people understand the problem you’re trying to solve. In our case, we first have to educate the market then sell, which takes an incredible amount of time and capital, neither of which startups have.”

Welsh’s breakthrough came during a pilot for a global pharmaceutical company. The company had 60 people reading information for 90 days, a process that theretofore seemed to work. Welsh’s machine, however, accomplished the same volume of work in 90 minutes. “They were blown away. They agreed the business should be run differently,” Welsh says. “People are naturally resistant to change. When the light bulb goes on, that’s when the fun starts.”

The pharmaceutical industry has proven to be fertile ground for Kyndi. Another early adopter of the company’s explainable AI is the United States government, a very discerning customer and also fertile ground for Kyndi. “AI is at the top of the federal government’s value chain. They know what they want and have real dollars to solve real problems. I would encourage all AI startups to look at government contracting,” Welsh says.

In 2019, Kyndi succeeded in closing a $20 million Series B investment round led by Intel Capital. After years of convincing Silicon Valley VCs to buy into his approach, it was a tremendous validation for Welsh, but surprisingly, not his proudest moment. “It’s all about the customer. When we solve real business problems, those are my proudest moments,” Welsh says.

Ever the competitor, Welsh spends 24/7/365 thinking about how to advance Kyndi and explainable AI. He cautions those who want to go down the entrepreneurial path to be introspective before acting.

“Successful entrepreneurs have the unique ability to sustain long periods of uncertainty and pain. If you don’t have the grit, don’t do it. It’s not easy.”