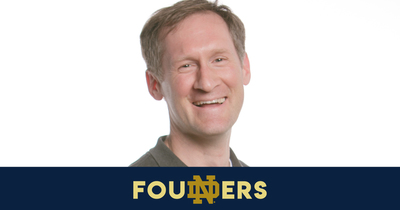 Even though his father was an alumnus of the University of Notre Dame, Brendan Dowdall never gave the school a second thought. It wasn’t until the Boston native spent a long weekend in South Bend for an Irish football game did he realize he wanted to attend Notre Dame.

“The school picked me,” he says.

Once on campus, Dowdall became purposeful in his choice of majors and his extracurricular activities. He took a class with professor Robert Vacca, a specialist in classical Greek language, literature and philosophy, and was so inspired that he declared Classical Greek as his major. He also got involved with Habitat for Humanity.

Dowdall smiles at his youthful choice of majors that seems worlds away from his current career as an entrepreneur and innovator in the construction industry. “Notre Dame is very good at fueling passions. I had always loved classical literature and building things. When I graduated, I took with me a deep sense of purpose.”

His first stop was Washington D.C., where he took a job with Habitat for Humanity before becoming a paralegal doing construction litigation. The transient nature of the nation’s capitol soon grew old and Dowdall returned to Boston where he “exercised his network” and, through a friend of a friend, landed a job with a new commercial construction company.

“We built it all—restaurants, office buildings, even labs at the Massachusetts Institute of Technology. It was a great place to learn,” Dowdall says.

As the company and his industry knowledge grew exponentially, Dowdall began to get restless. He decided to pursue a masters of business administration degree at Babson College, a school ranked number one in the country for entrepreneurship.  “I’m not a 9-to-5er. Seeing an opportunity I’m passionate about excites me.”

During the three years at Babson, he met regularly with a classmate to discuss startup ideas, ideally in the construction industry, where both had experience. The ideas went back and forth, but nothing stuck. One day, on a jobsite pouring concrete, an idea for the perfect startup hit Dowdall.

“We were pouring a foundation for a school in Boston in the middle of December, which is far from ideal from a weather standpoint. The client asked if the concrete would cure properly in the cold. The contractor I was working with said, ‘Trust us.’ The answer was not very satisfying for the client or me for that matter,” he says.

That moment inspired Dowdall and his Babson schoolmate, Ryan Twomey, to begin working on a novel idea for monitoring the concrete process via sensors embedded in the concrete. Many things can impact how concrete cures once poured such as temperature extremes, the size of the slab and the heat generated by concrete itself. Using real-time insights the sensors generate can accelerate construction projects, saving tens of thousands of dollars a day. Issues such as improperly cured concrete, which makes it more prone to cracking, can be avoided.

After little more than two years of development, bootstrapping and fundraising, Dowdall and Twomey launched Concrete Sensors in 2017. Instead of guesswork, contractors could now apply technology—wireless sensors embedded in concrete that monitor the strength and drying of the concrete in real time—to achieve the perfect pour.

Although it helped that Dowdall came from the construction industry, the launch faced significant headwinds, mainly that there was no perceived need for the sensors. “The common response I got was, ‘Buildings aren’t falling down. What do I care?’”

What ultimately got Concrete Sensors over the hump were good old-fashioned persistence, relationship building and reliable performance.

That and many small wins, admits Dowdall. “We saved people time and money on delayed projects, on big projects where the slabs are as much as 12 feet thick and on highly technical, technical dangerous projects like post tensioning that involves running wires through the length of a slab and then tightening them at either end to reinforce the structure.”

He adds, “It became hard to argue with how valuable Concrete Sensors is.”

In 2019, Dowdall entered discussions with Hilti, a leading global supplier of tools, technology, software, and services to the construction industry, on a possible acquisition. In March 2020, the two parties agreed to a deal where Hilti would acquire all of Concrete sensors assets and Dowdall would join the company as director of Concrete Sensors.

Although he can’t reveal terms of the deal, Dowdall is pleased with the deal. “There is no magic in knowing when to exit a startup company,” he says. “In our case, Hilti has the relationships and boots on the ground that will accelerate market adoption. I see it as an opportunity to invest myself in more innovation in the technology, but as director rather than CEO.”

His advice for future Notre Dame entrepreneur is this: “There’s no book that tells you when and where. Educate yourself and then just do it.”

Dowdall doesn’t rule out future startups. “Absolutely! Change can be meaningful and rewarding to not only you, but the greater community.”