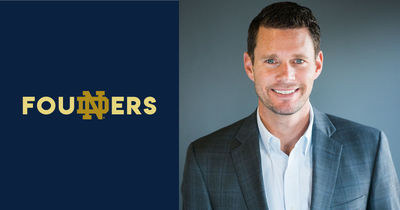 When Brennan Kelley starts talking trash, he’s not bragging about his past as a competitive diver or his time as a high school basketball coach in his hometown of Columbus, Ohio. While tempting, he’s not even talking about Notre Dame football.

No, Kelley is talking trash…about trash.

This University of Notre Dame alumnus parlayed his degree in accounting, his love of entrepreneurship, a great partner, and the support of his mother into a highly successful business called TrashCab. Kelley’s company provides doorstep-to-dump trash and recycling services to more than 15,000 apartment and condominium communities in the greater Columbus area.

It’s not a business Kelley ever imagined some 20 years ago when his mother “tricked” him into attending Notre Dame, a school that wasn’t on his radar. At all. Kelly shares the now famous family lore.

“The summer before my senior year, my mom encouraged me to go to Notre Dame’s diving camp taught by longtime coach Caiming Xie. It was my first summer camp and a growing up moment as I drove myself the four hours to South Bend. On the last day of camp, I was walking across campus with my new friends and there’s my mom. She had arranged for us to do a campus tour. I agreed to tour, but reminded her I wasn’t interested in Notre Dame.”

Kelley pauses for effect. “At the end of the tour, we sat on a bench in front of the Golden Dome and I told her, ‘I’m going to Notre Dame!’”

Kelley admits mom’s sneaky ways paid dividends. He joined Notre Dame’s swimming team and dove competitively his freshman year. He made lifelong friends. But he also received something greater: the inspiration of his peers.

“Everyday, I was surrounded with brilliant fellow students, many my friends, who were hard working and driven. It inspired me to be a better person, to be smarter and achieve more,” he says. “The lifelong friendships and inspiration are my valuable takeaways from Notre Dame.” After graduating, Kelly attended law school with the intention of entering sports and entertainment law. A year in, burned out on academics, he put his resume out, landing a position as chief contracts officer with Hanlin Rainaldi, a commercial construction company. Negotiating contracts proved to be a perfect fit and Kelley thrived. He also met his future business partner, Teddy Douglass.

“Teddy lived in an apartment that was about a half mile from the community dumpster. He was tired of having to trudge through snow or throw his trash bags on the roof of his car to dispose of it. Realizing he wasn’t the only person in Columbus with the problem, we started brainstorming how to turn Teddy’s solution into a business,” Kelley says.

After researching the commercial trash collecting industry, Kelly and Douglass, founded TrashCab. Unlike traditional waste management companies that collect accumulated trash in dumpsters, TrashCab focused on collecting trash from the doorsteps of apartment or condo residents to relieve the burden of schlepping to the community dumpster or trash compactor. The two purchased an F-150 pickup truck and began calling on potential customers.

It proved to be a difficult sell to property managers. They landed their first customer when they offered recycling along with regular trash collection services. “We found residents were asking for recycling, particularly in higher end communities, and it wasn’t available. That’s what finally got us in the door,” Kelley says.

In 2016, TrashCab got the breakthrough they needed when they signed one of the largest property management companies in Columbus. They also made two important business model changes: they bought their first compacting garbage truck and instead of depositing trash in community dumpsters, they hauled to landfills and community recycling centers.

This proved to be a game changer. Thanks to TrashCab, property managers could remove dumpsters and compactors from their communities, elevating esthetics and eliminating a number of issues. Says Kelley, “You’d be surprised how often trash compactors break down. In a 500-unit complex, the trash bags pile up quickly, attracting animals and making a mess. With TrashCab’s direct haul model, this problem was eliminated.”

Happy customers, word of mouth, and a unique value proposition has fueled TrashCab’s growth. The company is now up to eight compacting garbage trucks and now serves small businesses and special events in addition to multi-family communities. In March 2019, after careful consideration, TrashCab expanded into Nashville, Tennessee, one of the fastest growing metro areas in the country. While there are competitors, none offer TrashCab’s doorstep-to-landfill and recycling center options, and the market is receptive.

During TrashCab’s early years, Kelley attended a Columbus Blue Jackets professional hockey game with his parents. When their friends asked what he did, he explained how he and Douglass had started a business in the middle of  the great recession. HIs mother gave him a horrified look as if to say, “Risky move, son. I hope it pays off.”

Kelley smiles at the memory. In deference to his mother, he never imagined owning a trash collecting business. However, since TrashCab has taken off and proven to serve a growing need, he realizes successful startups aren’t always “nice and shiny and techie.”

“What really matters is that you have identified a need and are filling a gap. What TrashCab does is not glamorous, but everyone produces trash. While many businesses have slumped during the COVID-19 shutdown, ours has remained constant. With people working from home, kids out of school and eating more meals at home, trash volumes are up exponentially. Our multi-family community customers need TrashCab more than ever to deal with the volume, and we’ve been fortunate to have a dedicated crew of employees who have stepped up to the plate in these uncertain times” Kelley says.

Pausing to think back to 2011 when he and his partner founded TrashCab with a single pickup truck and no customers, Kelley offers this advice to those who want to start something. “Don’t wait. The longer you have a traditional job with a regular paycheck, the harder it is to let go. When you’re young, don’t have a job but do have a passion, go for it.”

He adds, “It may be as simple as picking up trash.”