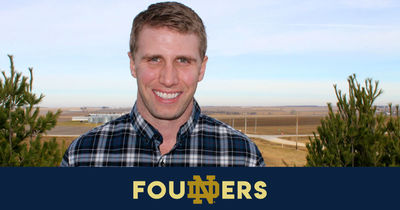 How many Notre Dame graduates can say they paid their tuition by raising and selling purebred Bassett Hound puppies?

That’s exactly what Brad McDonald did after his father told him that if he wanted to attend the University of Notre Dame, he’d have to pay his own way. The 12-year-old accepted his father’s challenge, setting into a motion a lifetime of determined entrepreneurship and a succession of startups.

McDonald explains the inspiration for his first business endeavor: “I grew up on a farm in Iowa and was a member of 4-H and Future Farmers of America. Even as a kid of 12, I gained an entrepreneurial spirit by raising, showing and selling championship pigs. I wasn’t able to have a regular job because sports and chores took up most of my time, so selling puppies seemed like a great way to make money without an added commitment.”

McDonald was savvier than most kids, and likely many adults. He didn’t sell his Basset Hounds in Iowa. Instead, he targeted wealthy areas of Chicago where his family-friendly pups commanded premium prices. In all, he raised around 150 puppies—enough to cover Notre Dame tuition.

Sometimes the best-laid plans go awry. When Notre Dame passed on his college application, McDonald enrolled in Iowa State University, a move that turned out to be a blessing in disguise. Iowa State is a top research university, well known for its agriculture and engineering schools. McDonald excelled academically, expanded his network in the agriculture industry, and near the end of his freshmen year, decided to apply to Notre Dame again. However, he had no intention of transferring. McDonald wanted the satisfaction of knowing he was able to be accepted.

Then the acceptance notice came. He decided he couldn’t pass up the chance to fulfill his childhood dream. “I was overcome with a flood of emotion. Everything I did to get to Notre Dame—the puppies, the good grades, saving—came back. I had to go to South Bend,” he recalls.

His decision to transfer in to Notre Dame was reinforced by a talk Father Jenkins gave to incoming transferees. “He said to us, ‘If anyone here gives you a hard time for being a transfer, tell them the president was also a transfer. You absolutely belong here!’ That really made an impression on me.”

McDonald quickly settled in and began pursuing a degree in economics. He served on the student body senate, representing O’Neill Hall. He attended numerous football games. Above all, Notre Dame filled him with a sense of peace.

“To be able to drop into the Basilica of the Sacred Heart whenever I wanted…to light a candle at the grotto before an exam and throw it up to God…it was a remarkable place to be. Attending Notre Dame fulfilled my childhood dream,” he says.

Fortunately, McDonald had more dreams to pursue. During his senior year, he attended a career fair at Iowa State. With his farming background, connections made at Iowa State and a Notre Dame economics resume, he was a bit of a novelty. It worked; he landed a job as a commodities trading advisor in White Plains, New York. While busy forecasting commodities supply and demand, he began working on a startup idea that came to him while waiting in a restroom line at a Notre Dame football tailgate.

“I couldn’t believe I had to spend half and hour waiting to use a restroom. I knew there had to be a better way to handle overflow traffic. So I came up with an idea for a flexible-priced, pay-to-use portable toilet that utilized surge pricing. During heavy use periods, those with the greatest need can pay to skip the line,” he explains.

Serious about the concept, McDonald eventually applied for and received a patent. He also entered his startup in Notre Dame’s 2015 McCloskey New Venture Competition. His startup was chosen as a finalist and second in the presentation portion of the competition. The company is still in play; McDonald is negotiating with port-a-potty manufacturers to commercialize his pay to go startup.

McDonald admits he’s always thinking of different things to pursue. That curiosity combined with a passion for doing good in the world led him to a novel agriculture company in Finland called Agroy that enables farmers to purchase agricultural products like seed, fertilizers and herbicides via an online marketplace.  The idea is to bring more pricing transparency to farmers, who typically experience widely fluctuating prices for these products.

After talking with the CEO of Finland’s Agroy, in February 2016 McDonald started Agroy, Inc. in the United States as a subsidiary of the European parent company. His years working on the family farm and in the commodities consulting business paid off. Within three years of launching, Agroy had 1,300 farmers, representing 11 million acres, using the Agroy platform.

“The acceptance Agroy enjoyed was largely because transparent pricing is not a hard sell,” he says. McDonald’s success in disrupting agriculture’s traditional purchasing model led to his being honored as one of Forbes 30 under 30 in the e-commerce sector in 2018.

In February 2019, McDonald orchestrated an exit from Agroy. With the proceeds, he invested in his next entrepreneurial endeavor, that of farmer.

“My family has owned McDonalds Acres, where my parents live and work, for 100 years. When an adjoining farm came up for sale, I knew I wanted to take advantage of a great opportunity. It worked out that I could buy it and establish McDonald Farm,” he says.

Farming isn’t as simple as making a hole and planting a seed; modern agriculture is highly sophisticated. While Tesla is just now testing self-driving vehicles, the agriculture industry embraced this technology decades ago. McDonald himself operated self-driving tractors while in high school.

With COVID-19 disrupting supermarkets, supply chains and farmers, McDonald sees his Notre Dame economics degree and experience in commodities analysis and banking as a competitive advantage in his old-new day job. Industry trend analysis, financial benchmarking, econometric modeling, long-term industry forecasting and margin projection are essential to life as a farmer. And yet, despite the necessity to adapt to new technologies to sustain a thriving farm, some things will never change. McDonald, now a husband, father and owner of a Labradoodle, doesn’t want everything to change.

“Growing up on a farm, I was exposed to things other kids rarely experience and I want that for my own children,” he says. “I also appreciate the satisfaction and work ethic that come with the aches and pains of physical labor. There’s a lot of joy and pride in running a family farm.”