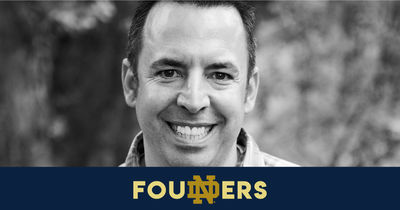 Growing up in Tempe, Arizona, it was easy to spot Pete Brennan. He was the kid wearing the University of Notre Dame hat.

He came by this unexpected—at least in Arizona—devotion naturally. His grandfather, an Irish-Catholic former Marine, was a huge Notre Dame sports fan, despite having never attended a single event. Yet on game day, the elder Brennan was always there to support the Fighting Irish.

That devotion made a lifelong impression on Pete Brennan, who eventually earned his undergraduate degree from Arizona State University before starting a career in sales and marketing with the Ernest & Julio Gallo Winery in Modesto, California.

As part of the company’s management development program, Brennan first served as a sales representative, traveling to supermarkets to build displays and learn the business from the ground up. At the same time, he developed an appreciation for what food and beverage brands mean to people.

Brennan explains. “Food and beverage brands are part of some of the most special occasions and experiences. They create an opportunity to bring people together. Those early days with Gallo taught me that brands are tangible and have the power to unite us.”

Gallo also united Brennan with his future wife and business partner, Maria Garcia, whose family had immigrated to the United States when she was five. Garcia, whose background is in finance and operations, had worked in the produce fields of the Modesto area as a child with her mom and sister. It was she and other Gallo colleagues and mentors who encouraged Brennan to pursue an unrealized dream: attend Notre Dame.

Buoyed by the support, Brennan applied to the Mendoza College of Business’ master of business administration (MBA) program. During a visit, he was struck by the energy on campus. “The professors I met urged me to explore something beyond a diploma. There’s a commitment at Notre Dame to creating good in the world; faculty, staff and students all know it and pursue it.” Brennan says.

He was filled with gratitude to be accepted into the program. “I felt it was a great privilege to attend Notre Dame and with privilege comes great responsibility.”

Before graduating with an MBA in marketing, Brennan was able to fulfill another dream, this time his grandfather’s. His grandfather flew to South Bend with Pete’s dad to experience their first Notre Dame football game and all of the traditions in person.

Over the next ten years, Brennan honed his marketing know-how with a number of respected companies, including Gallo, Kellogg’s, Del Monte and Foster Farms. He and his wife welcomed two daughters. Life was good.

Then, in 2016 when the national debate surrounding immigration became contentious, his two daughters came to him with a fearful question:  “Daddy, are they going to send mommy back to Mexico?”

Brennan was shocked. “We put our girls to bed that night, and let them know that Mommy wasn’t going anywhere. Maria and I talked that night and realized, if our daughters are worried, how many other children of Latino parents are worried, too? Knowing that Latino families, much like the Irish and Italian families of earlier generations, have come to this country to pursue the American dream of a better life, we felt we had to do something.”

That ultimately led the Brennan and his wife to found Soñar! Foods, an organic snack food company. Soñar! in Spanish means to dream, and the couple are on a mission to nourish a nation of dreamers. They also set out to nourish every point in their supply chain. This includes sourcing USDA Organic Certified ingredients, which removes toxic herbicides and pesticides from the fields and surrounding communities and delivers more nutrient-dense ingredients in a "better-for-you" chip. They also provide a least one percent of annual sales to the Latino Community Foundation in support of efforts to create more vibrant communities where all can thrive.

“There are 59 million Latinos in America, and we set out to celebrate the positives in the community. We are using food as a force for good to break down cultural and health divides,” Brennan says.

Soñar! Foods’ product line includes three flavors of organic grain-free tortilla chips that are not only better for consumers, but delicious on their own and when paired with salsa, guacamole or dip. The ingredients, which include garbanzo beans, cassava, hemp protein powder, chia seeds and flax, are organically sourced. Brennan says going organic is important not just to consumers, but also to farm workers, often Latino, who work in the agriculture industry.

“We want to make a difference in all aspects of our business,” he says.

And that includes investing in community and living their mission. “We want to establish a positive image for our daughters and young Latinos as change makers; to be prideful about your identity and heritage. We want young people to know you can do whatever you set out to achieve.”

Living the mission has helped secure the loyalty of influential retailers. Soñar! Foods’ first customer was Rainbow Grocery, serving San Francisco for more than 40 years. Whole Foods in the Rocky Mountain region and Sprouts in Northern California were recently added along with several regional natural and organic grocery stores. Amazon will begin selling the chips in April. Consumers can also purchase the chips on the Soñar! website.

Just a year in business, the response to Soñar! Foods’ products and mission has been overwhelmingly positive. In early March, the company was one of eight companies chosen to participate in the 2020 Chobani Incubator, which supports and mentors food companies with big ideas challenge the food industry and make a difference. That same month, Soñar! Foods was presented with the Nexty Award for Best Mission-Driven New Product, among the highest honors bestowed by the natural and organic foods industry.

At the time of this profile, the United States was in the midst of the COVID-19 pandemic and confined to home. In the face of this turbulence, Brennan remains optimistic about the family’s company and future entrepreneurs, pointing to innovative thought, modeling positive behavior at the local level, and a passion for the greater good as the path to brighter days ahead.

Adds Brennan, “Entrepreneurship is not a solo act. Treat it as a team sport by having people on your team and around you who will encourage, provide honest feedback, help you focus, and guide you.”