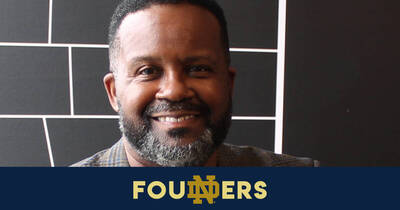 As a high schooler in Southfield, Michigan, Doug McCollough dreamed of a career as a jazz vocalist. He applied to the famed Berklee College of Music in Boston and was accepted. McCollough absolutely loved his training at Berklee, even pursued a professional singing career, but once married and in his thirties with two kids, he made the decision to go back to college and earn a degree in a new discipline.

The big unknown was what that discipline would be. When it came time to declare a major at the University of Toledo, McCollough struggled with an answer. His mother was a librarian, so he suggested library science to his advisor.

“I was told that was not an option,” McCollough recalls. “My adviser suggested I try Information Systems. It sounded good so I did that. Turns out I got very good advice!”

That degree whets an appetite for more education. In 2001, McCollough began exploring executive Master of Business Administration programs, ultimately choosing the University of Notre Dame’s Mendoza College of Business. “Notre Dame’s attitude toward me was ‘How can we work with you to help you be successful?’ It was clear there was a place for everyone at the table. I was seeking my path in the business world. Notre Dame allowed that to happen by setting up the possibilities without pushing me in any one direction.”

When he graduated from Notre Dame, McCollough was with Lucent Technologies but says as a Black male he sometimes felt intimidated by corporate America. Information technology gave him a comfort level that smoothed his path. “My brain wiring leans to order and organized methods of achievement. I used my knowledge and comfort with technology to figure out how to advance in the corporate world.”

In 2005, McCollough switched to the public sector. Today, he is the chief information officer at the City of Dublin, Ohio, where he has led a number of high-profile technology projects and is recognized as a national thought leader on initiatives that include smart mobility, broadband expansion and blockchain in government. He says over the course of his IT career, he has enjoyed numerous career opportunities, great salaries, and working with creative, resilient people One thing troubled him: the lack of African Americans in the tech field.

“As a leader in technology and interacting at the c-suite level, conversations centered on the same thing: the lack of talent in the tech industry and how hard it is to find new people. To which I would say, ‘There are lots of people out there who need jobs and don’t know about the opportunities in tech. The real conversation should be how do we put two and two together?” he says.

Despite a busy career and family of four children, McCollough set out to answer that question. “I looked at the struggles of others and determined the issue in technology is a representation barrier. People seek careers that are accessible. In the Black community, it’s sports and entertainment. You see people who look and talk like you, so you go in that direction,” he explains.

“People of color think careers in IT are not accessible and one of the reasons is they don’t meet technologists. I wanted to show people it’s a great career path and more importantly, how to get on the path. As a Black male who is a successful technologist, I  could serve as a lighthouse for others.”

Over the years, McCollough became involved with various organizations design to attract people of color to the tech field. He co-founded Black Tech Columbus, a networking group for Black tech professionals. He created the City of Dublin blockchain group. He served on the National Advisory Board of Tech Corps, a  program that gives K-12 students access to tech skills, programs, and resources to prepare them for college and career. Every chance he got, McCollough spoke to high school and college students as a testimony to what Blacks can achieve in tech. “If you can see it, you can be it,” he says.

In 2020, McCollough launched his boldest initiative to date, co-founding a startup company called Color Coded Labs with the mission of finding, training, and setting up people of color with companies ready to address diversity in tech and innovate at scale. “Tech leaders were struggling to find diverse candidates and asking why community colleges and bootcamps were not providing equitable opportunities to underserved, underrepresented and marginal groups. There was an obvious need for a new model,” he says.

From the beginning,  Color Coded Labs’ co-founders—Bruce Jones, Branden Jones, Kevin Lloyd, Mark Kvamme, and McCollough—paid close attention to product-market fit, asking themselves who they wanted to serve and how. Analysis defined their target customers as adults, early 20s and up, with a household income of $45,000, likely working more than one jobs to make things meet. Some would have college degrees or attended college. Life was not easy, but they were making it work. McCollough terms them “gritty adults.”

“The more we dug into what these people needed to be successful in advancing their career, the more appreciation we had for them,” McCollough explains. “This helped us design our curriculum and services.”

The initial Color Coded Labs offering is a 19-week course in full-stack JavaScript, a foundational skillset that qualifies an individual for a career in frontend development as well as middle layer development. Graduates can go into cybersecurity, data analytics, and developer roles paying more than $60,000 annually.

The curriculum is designed specifically for people of color and is groundbreaking in that it goes well beyond technical training. Students choose to learn when it’s convenient for them, including evening classes. They are provided with laptops, have access to a co-working space, mentors and stipends. Students also receive training in soft skills to ease the transition to corporate IT jobs they never imagined possible. By the end of the 19 weeks, graduates amass 300-plus training hours and are job ready. And there is a list of corporations ready to hire them.

If the Color Coded Labs offering seems rich in resources, it’s intentional. “The inequity in Black communities runs deep. Little handouts won’t do it. The tech industry has high demand for talent and lots of money for salaries. Our plan is big: create the talent pool, connect them to corporations with tech roles to fill, and build wealth for people of color and their families. We want to set people up to buy a house, buy a car and send their kids to college,” McCollough says.

Color Coded Labs has leaned into multiple funding streams. In 2021, the company successfully completed a small pre-seed round of with participation from Cleveland’s Jumpstart Ventures, Columbus’s Rev1 Ventures and Mark Kvamme, a partner in Drive Capital, another Columbus venture firm. Color Coded Labs is currently raising a $3 million seed round with $2.1 million in soft commitments. McCollough hopes to close the round by the end of first quarter 2023. Proceeds will be used to expand their curriculum and began planning for expansion in Cincinnati and Cleveland.

Color Coded Labs has received non-diluted funding from Jobs Ohio and the City of Columbus as well as JP Morgan Chase to fund scholarships.

McCollough admits pitching and participating in due diligence are skill sets CIOs don’t normally employ on a daily basis and it has required  some “exercise” on his part. “My past experience as a vocal performer has come in handy! I also have the confidence knowing we’ve done what we need to do to attract investors. We have a great brand, our product works, and we have traction and revenue.”

That traction is apparent in the number of students the program has attracted in its first two years. The first cohort, which launched in June 2021, attracted six students. Enrollment in the second cohort, which began seven months later in February 2022, tripled in size to 18 students. The third cohort had 20. Color Coded Labs is now recruiting its fourth and fifth cohorts.

The company has also stayed busy recruiting corporate sponsors that aren’t allowed to write a check and call it a day. Instead, sponsors are required to become active partners with Color Coded Labs and student learners. “I tell them we’re not going to wrap up a baby and deliver it to their doorstep,” McCollough says. “If they want to hire our graduates, they have to meet students and work with them on non-technical skills such as how to do an interview, how to network, mentoring, and overcoming imposter syndrome.”

He adds, “There are tremendous benefits to being active partners. They’re helping students become work ready and the recruiting they do for their organization is invaluable. For our part, our corporate partners help us attract students. Seeing companies lined up to meet them and work with them creates instant credibility for Color Coded Labs.”

With partners like Huntington, JPMorgan Chase & Company, Accenture, Crane Group, Diversified Systems, and others listed on the Color Coded Labs’ website, it’s hard not to be impressed by the employers wiling to train and ready to hire graduates.

Asked what the company’s biggest challenge has been to date, McCollough says designing a communications platform to get people to move from what they are doing to committing to the training that will take them to a new career and exponentially higher earning potential. “Convincing people to move in a new direction is hard. We are naturally skeptical and hesitant to change.”

To overcome the obstacle, the Color Coded Labs team has gone to places college and corporate tech recruiters typically don’t go. This includes hip-hop concerts, sporting events at historically Black colleges and universities, Juneteenth celebrations, churches and mosques, and even an African American male wellness walk. “We set up a booth and talk to people about tech. If we can, we bring some of our graduates, as this changes the conversation. People listen when they see a person in their twenties say they work in software and their income has doubled as a result of Color Coded Labs,” McCollough says.

“At the end of the day, people are rational based on the opportunities they can see. When we show results, this builds credibility for the Color Coded Labs brand,” he adds.

The biggest win to date for Color Coded Labs is personal for McCollough, who knows what it’s like to start a new career path later in life and persevere in the technology field where he was in the minority. “Seeing our graduates succeed, helping them double their income and start creating wealth for themselves is very gratifying. When you transform 100 people and then 500 people, you have transformed communities, and are changing the course of future generations.”

Asked what advice he had for others interested in starting a company, McCollough offered this: “Don’t start a company by yourself. Co-founders bring honesty and tough love. Working with other people also creates organizational discipline.”

He also has a special message for future students of Color Coded Labs:

“If you think you’re not going into technology for whatever reason, you’re already in it. But it’s up to you to make it work for you. America will continue having a dysfunctional tech economy if an entire population is not represented in the field.”