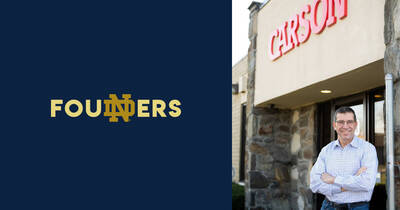 During the first ten years of running his business, Richard Cameron’s mother would routinely ask, “Why are you selling binoculars? There are so many other things you could be doing.”

To her, it was an honest question. The family business was finance. Cameron’s father and siblings worked on Wall Street and had for decades. The fact that one of her children would eschew Wall Street in favor of importing and selling binoculars simply did not make sense. And it didn’t help that this wayward son had earned a degree in Finance from the University of Notre Dame.

Cameron chuckles at the memory. Today, Carson Optical is among the top optical brands in the world, supplying branded and private label binoculars, pocket microscopes, magnifying glasses, and accessories to retailers that include Amazon, Walgreens , Walmart, Cabela’s, Barnes & Noble, Meijer, Michaels, and Office Depot to name a few. He also operates distribution centers in the Netherlands, United Kingdom and Hong Kong.

What’s amusing to Cameron is not his mom’s skepticism, but the overall kismet of his three decades long venture. He fully intended to go into finance despite having no passion for it. As a college student, he didn’t know he could buck the system and blaze his own path.

That said, Cameron admits to being bitten by the entrepreneurial bug as a teenager in his hometown of Huntington, New York. During high school, he managed ski trips, earning free skiing for being the organizer. While at Notre Dame, he ran food sales in Dillon Hall. What he earned paid for a semester’s tuition. These early successes whetted an appetite for what could be.

Upon graduation in 1984, Cameron didn’t follow his heart and start a company. Instead, he followed his head and went to Wall Street. Despite the familial pedigree and Notre Dame degree, landing his first job wasn’t a piece of cake. Unwilling to give up after traditional job-hunting strategies yielded nothing, Cameron began sneaking onto the trading floors of Wall Street firms and handing out his resume to whomever would take one. Being shown the door by security on multiple occasions didn’t deter his quest; he was relentless. He snuck in, resumes in hand, again and again until he landed a job.

Despite working for highly respected financial services companies, first in foreign exchange trading and then in sales, Cameron’s interest soon waned. Thinking a change in scenery would revive his career, he accepted a position in 1989 with a financial company in Tokyo. “I was 29 and knew just enough Japanese to live and have conversations, but I couldn’t read or write in Japanese. I figured the novelty of a foreign country might make my job more tolerable. It didn’t take long to realize it was the same job. So I decided to quit.”

After traveling around Asia for a few months, Cameron returned to New York and took a series of odd jobs while he plotted his next move. During this time, he designed a line of greeting cards. He worked as a cashier at a Tower Records store and observed a lot of people stealing CDs. It was obvious there was no future in record stores. While working with an import-export business, his conversational skills honed during his time in Tokyo opened the door to an unexpected opportunity.

“I developed a relationship with a Japanese trading company. One day they sent me a pair of battery-powered zoom binoculars. There was absolutely nothing like them on the market. They were so neat and different, I thought I’d try selling them in the United States,” Cameron says.

With youthful optimism and to jumpstart sales, Cameron took a chance and sent a friend with a pair of his binoculars to The Sharper Image’s open buying day. At the time, there was no bigger name in high-end gadgets and novel luxury goods than The Sharper Image.

“Sharper Image was wildly popular, so I decided this was where I needed to be,” he explains. “Richard Thalheimer, the founder and then CEO of Sharper Image, liked my binoculars so much and they put them on the cover of their catalog.”

The unexpected, over-the-top product placement was as exciting as it was frightening. Cameron quickly set up shop in his mother’s basement in Long Island, New York. He also tapped into the $180,000 he’d saved during his finance career, thinking it would last forever. It was gone in six months.

“The import business is capital intensive. You order your product, pay for your product, wait for it to come, wait for it to sell, and then wait for payment. I thought I had the cash to handle that,” he says. “What I didn’t anticipate was selling $700,000 worth of binoculars in 12 months. We followed that by selling another $1.2 million worth the second year. I didn’t have enough money to pay my supplier!”

Desperate for cash, he began asking friends and family for small loans. One of first to chip in was his aunt. “My mother didn’t approve of my fundraising efforts and made me send my aunt’s money back,” he says. Fortunately, other lenders remained onboard and were paid back once cash flow was established. Once the company was on its feet, Cameron relied on self-funding and bank loans when needed.

“I was extremely fortunate that the company took off so quickly. Guys at the time were gadget hungry and I had a cool product. This was before the Internet, so I really had to work to get my binoculars out there and in front of buyers,” he says.

Cameron proved as relentless with his business development as he had been landing his first job on Wall Street. He would go to Barnes & Noble and pour over magazines to find out who did holiday gift guides, who had articles on top ten products and who the editors were. He then contacted the magazines to get his binoculars included in articles and product reviews. The effort paid off in spades. Cameron’s binoculars were featured in GQ, Popular Science, Cosmopolitan, The New York Times, The Wall Street Journal, regional newspapers, and in major catalogs such as Orvis.

While many people would have been satisfied with the status quo, Cameron knew that to continue on his growth trajectory he needed to change his business model. When he started his company, he named it Copitar USA after his binoculars supplier in Japan. “That turned out to be a mistake as it tied me to one supplier. I wanted to bring on new products and new suppliers. In  1996, I renamed the company Carson Optical.”

With the Internet in its infancy, identifying new suppliers was very much a hands-on process. When Carson Optical decided to expand into magnifiers, Cameron started at ground zero, contacting an economic development group in Hong Kong to get a list of manufacturers of optical products. He then flew to Hong Kong to visit each factory and interview their management teams. It was, he says, “an exhausting process.”

“The very last one I visited was the one I selected. The owner of the factory met me at a McDonald’s with a bag of samples a few hours prior to my return flight to New York. That was 25 years ago, and they are still my primary manufacturer today.”

Cameron has always appreciated the importance of packaging and product presentation. Things like magnifying glasses and other optical accessories are very often impulse purchases. He has invested heavily in Carson Optical’s brand and shelf presence to capture more impulse shoppers. It’s one reason why Carson is now the largest manufacturer of magnifying glasses and pocket microscopes in the world.

The other reason? Carson Optical is among the world’s top product design innovators. “With the rise of the Internet, the business became much more competitive. While we had always been creative marketers, we morphed into product design and development. We now design our products in house with our own machinery and design engineers.”

Cameron has leaned into his Notre Dame roots to do so. In 2008, he hired two engineering student interns from Notre Dame. One of the interns—now Notre Dame instructor Jason Carley—developed a set of binoculars Carson Optical patented. Today, the “Irish” binoculars are among the company’s best-selling products. Cameron continues to hire interns from Notre Dame who are studying industrial design or mechanical engineering. “We have hired a lot of creative people with phenomenal talent.”

Fostering a creative culture plays a big role in keeping Carson Optical relevant. “Buyers want to see what’s new, so we are constantly developing  new stuff. I don’t impose too much structure on my people. They are free to create.” As a testament to unleashing creativity, Cameron says the company holds more than 100 patents and owns hundreds of product molds.

The biggest challenge he’s faced over the years is the rise of the Internet and the counterfeiting and lack of transparency it has spawned. “You wouldn’t believe how many trademark and patent lawsuits I’ve filed and won over the last ten years. Problem is, you spend $100,000 to get $100,000.”

While counterfeiting is less of an issue for Cameron today, consumers are still taken in by dishonest online sellers. “There are lots of fakes online. Consumers have no way of knowing if the magnifier, telescope, or binoculars they’re buying online delivers the power the seller says it does. It’s very hard for honest companies to compete online,” he says.

Which is why Cameron prefers to sell business-to-business to established, respected brands. “When you land a big account like Walmart and Office Depot, that’s a huge win.”

When asked what advice he’d offer to those who’d like to start a company, Cameron is quick to respond, “Follow your heart.”

“The hardest part is the people around you who point out the obstacles and tell you why you will fail. Don’t listen. Sometimes being young and stupid works in your favor. You will always regret it if you don’t try.”