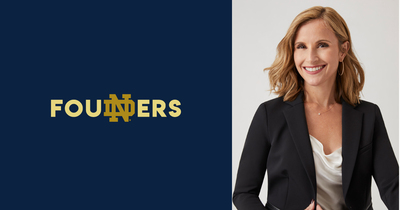 Of all of the incredible experiences Virginia Carnesale had as a University of Notre Dame varsity cheerleader, one left an indelible mark on her heart: appearing at children’s hospitals, senior centers and women’s shelters. And that’s saying something when one has performed on some of Division One football’s biggest stages, namely the Fiesta Bowl, Orange Bowl, Citrus Bowl, and the Navy game in Ireland.

“While it was really fun traveling to big games and when family and friends said they’d seen me on television, community service is one of my best memories. Seeing the smiles we put on people’s faces by just by showing up in our uniforms and spending time with them was very special. Community service was an important part of what we did as a squad; it was a big responsibility. I enjoyed being an ambassador for Notre Dame,” Carnesale says.

A competitive gymnast back in her hometown of Santa Barbara, California, Carnesale almost didn’t get a shot at being a cheerleader for the Fighting Irish. The year she applied for admission was the same year the movie Rudy was released. Notre Dame was flooded with applications and many applicants, including Carnesale, were waitlisted.  Undeterred, she pulled a Rudy of her own and attended Saint Mary’s College in South Bend her freshman year before transferring to Notre Dame and fulfilling her dream.

Little did Carnesale know how the tenacity, grit, and team spirit developed as a lifelong athlete and collegiate cheerleader would prepare her for an even bigger fight—one for her life—and founding a ground-breaking company.

That fight was far in the future when she accepted her first job out of college as a consultant with Arthur Andersen. “I was good at math, science, and technology so this was a good place to launch my career,” she explains.

After two years of PowerPoints, budgets and project management for software clients, Carnesale became restless. “I wanted more passion in my day-to-day work. I had never been exposed to all of the career options out there, so I returned to school for a Master’s in Business Administration to get a more global view on business and determine what industry and what function I wanted to pursue.”

The industry that spoke loudest to Carnesale was retail. After completing an internship with a consumer products company in beauty, she set her sights on the fashion industry and landed a position with an iconic international retailer Gap Inc. known for its banners Gap, Old Navy, Banana Republic, and more. There, she leveraged the skills honed as an Arthur Andersen consultant in new strategy and marketing roles.

Over the next 20 years, Carnesale rose through the ranks working with other prestigious fashion brands, including Nike, Bebe, Saks Off Fifth, and Gilt. She credits her Notre Dame and University of Southern California networks with getting her from one step to another. “I encourage young people if there’s a company you want to work for,  find someone there with a connection to your school and reach out to them. It definitely worked for me.”

By 2017, Carnesale was working in New York City with luxury online fashion and lifestyle retailer, Gilt, when she received news that her father was losing his battle with cancer. She decided to move back to California to spend as much time as possible with her parents. Her father passed away in mid 2018. Six months later, Carnesale was diagnosed with breast cancer.

“I had the first mammogram of my life at age 43. Breast cancer doesn’t run in my family, I had no symptoms and they found something.”

The something was stage zero ductal carcinoma in situ (DCIS). Typically, this form of breast cancer is not life threatening but can lead to invasive breast cancer. A fine needle surgical biopsy confirmed the calcifications in one of her breasts was cancer.

The standard of care is surgery. Still, Carnesale got three additional opinions from surgeons. All advised she undergo a mastectomy. If she was lucky, she wouldn’t have to undergo chemotherapy or radiation. To protect her family building options, she underwent fertility preservation in the event chemotherapy would be required. Because of the holidays, she was unable to schedule surgery immediately but did secure a date two months after her initial diagnosis.

Carnesale originally planned to have only the breast with cancer removed and reconstructed. When it was determined the cancer had spread to two lymph nodes, her situation was deemed more serious and was ultimately a stage two diagnosis. She decided to have her other breast removed to reduce the risk of the cancer recurring.

This was just the beginning of an 18-month cancer journey that ultimately would include four rounds of chemotherapy, 28 rounds of radiation therapy, two reconstructive surgeries, and the challenges of navigating the physical and emotional stress of facing down death.

Carnesale admits to feeling super overwhelmed. “Chemotherapy was much harder on me than radiation. The emotional toll of losing my hair was overwhelming. As women, much of our femininity is tied up in our hair. I bought wigs, scarves, turbans, beanies, and headbands to help me maintain a sense of self.”

She also leaned into her physicians and caregivers, other patients, non-profit cancer and wellness organizations, and others to find her way. “I firmly believe that God put me back in my hometown to be surrounded by family and friends during  my own cancer journey.”

Wanting to look like a stylish young woman and not a cancer patient proved to be an ongoing challenge through each stage of treatment and recovery. She shopped many, many places to find clothing and bras that were comfortable and functional. “What I wore was dictated by where I was in the journey. Early on, I wore pajamas and loungewear. I needed button front tops after surgery because I couldn’t lift my arms above my head,” she says.

“There was no single destination that curated a great selection of clothing, wigs, and accessories for cancer patients. No education was available at stores either. I had to educate myself and that was a tremendous amount of work,” she adds.

To reduce future risk of cancer reoccurring, Carnesale dramatically changed her lifestyle and beauty routines, choosing a clean diet, hair and makeup products; continuing to exercise; and switching home cleaning supplies. “I made a concerted effort to reduce toxins and pesticides. There are very common ingredients in our hair and beauty products and foods that are carcinogenic and endocrine disrupters. It was hard to figure out what to avoid.”

During her cancer journey, Carnesale thought deeply about how she could make the process easier for other women diagnosed with breast cancer. “Women who are diagnosed in their thirties and forties are in the prime of life. With families and careers, most don’t have time to figure it out on their own. I wanted to inspire women and make the process of fighting breast cancer less overwhelming and give them a boost of confidence. With my background in retail and digital strategies for top brands, I believed I had a unique opportunity to make a difference.”

In 2021, this desire led Carnesale to launch Stage (ShopStage.co), an online marketplace for women featuring  carefully curated fashion, health and beauty, and other products; information, and inspiration from women who have lived the breast cancer journey and are committed to help others preserve their dignity, inner and outer beauty. Prior to launching, she did extensive market research, collaborated with brand partners to curate products cancer patients want and need, and worked with a clean beauty consultant to identify the most important ingredients to avoid. Additionally, she recruited breast cancer survivors to create personal stories and advice for the Stage blog and medical reviewers from leading institutions to vet the content for accuracy.

When browsing the site, women can go the traditional approaches of clicking on product categories, brand and sales, or by where they are in their cancer journey: surgery, chemotherapy, radiation therapy, and recovery. The latter is a very important option, says Carnesale. “A woman’s needs change a lot. Take bras for example. Needs are very different during surgery and reconstruction. So we have really great basics that help women through.”

A unique aspect of Stage is its gift registry that provides family and friends giving options. “People want to help. I received gifts that were well intended but I couldn’t use or enjoy them. Flowers are nice but they don’t last. Candy has to be avoided during treatment. Our registry helps people who want to help make choices that will be greatly appreciated.”

Stage donates five percent of net proceeds to “pay if forward” to help others. Carnesale has chosen three organizations—The Chick Mission, Unite for Her and the Expect Miracles Foundation—as beneficiaries. Stage also donates 10 to 20 percent of sales on a special collection to the Breast Cancer Research Foundation. She is passionate about making her gratitude real and impactful for others who are a positive force for good in the breast cancer world.

Since launching Stage nine months ago, Carnesale has notched a number of wins. The site has received positive press from Women’s Wear Daily and Forbes. She has grown her vendor community from 40 to 70, giving women ever more choices to ease their journeys. Engaging charity partners she admires and respects is another win. Finally, receiving letters and emails from breast cancer patients who love the site is one of the biggest wins and reinforces that Stage is on the right track.

There have also been challenges. The original go-to-market strategy relied heavily on social Google and Facebook advertising. Changes in privacy settings and rising costs have diminished the effectiveness and feasibility of these tactics. The biggest challenge; however, is fundraising. Carnesale raised a friends and family round of capital and bootstrapped the business to get through the launch year. Because of the challenging economic climate, she postponed a planned seed round until 2023. Being able to show more traction will help attract investors. She is currently working on identifying angel groups, individual investors, and issue-driven investors who will appreciate Stage’s novel intersection of consumers, technology and impact.

In many respects, Carnesale’s cancer journey has only just begun. She’s just in a new stage of uplifting other women with breast cancer who feel lost, overwhelmed and cut off from their femininity by reminding them they can still express their personal style. “I want them to know breast cancer is just a moment in time and Stage is here for them. Breast cancer is very hard, but you will continue to grow and change and ultimately evolve as a person because of it.”

Asked what advice she has for others who want to start a company, Carnesale offered this: “Don’t be afraid to have a point of view. Have a clear vision and stay true to it.”