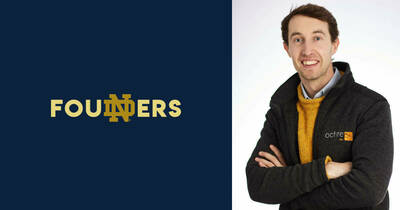 Read Jack O’Meara’s LinkedIn bio and you’ll discover an intriguing list of past careers: busker, farm laborer, barman, petrol station manager, tutor, and bookmaker. Out of all of these disparate jobs, the last is his favorite.

“My granddad was a bookie in Athlone, Ireland. It was the family business. I got my first job as a bookie at 13, cleaning toilets and watching the odds on horse races, football and other sporting events,” explains O’Meara.

He adds with a smile, “I was always good at maths.”

As for the other jobs, it was a way to make a buck to get him to a career he truly fancied: biomedical engineering. His deep interest in how the body worked took him first to the University of Galway and then off to the United States Galway had a relationship with Purdue University’s Biomedical Engineering Department, so O’Meara applied and was selected to study there. The experience proved to be an eye opener.

“The scale and ambitiousness of my United States counterparts was amazing. The program was much tougher academically and the people I met were very passionate about their studies. Once I graduated and returned to Ireland, I was keen to get back to the United States,” he says.

How to return to the States and continue his education was not entirely clear to O’Meara. Education takes money and while his motivation was deep, his bank account wasn’t. It was that summer, working in Chicago, first on an internship and then in construction, when he discovered his path forward.

“I was playing in a Gaelic football league and a fellow player told me about the ESTEEM graduate program at the University of Notre Dame. I researched it and loved the concept. ESTEEM offers a really nice marriage of biomedical engineering and business, and I’ve always been entrepreneurially minded. There was one problem. The University of Galway wasn’t one of the international programs with an association with ESTEEM,” O’Meara recounts.

That is when the luck and the pluck of the Irish kicked in for O’Meara. “I hounded David Murphy to give me an interview. After much persistence, I got an interview, and ultimately was given a scholarship to attend the ESTEEM program.”

Reflecting on his time at Notre Dame,  O’Meara says the ESTEEM program fundamentally changed his career path. He competed in the McCloskey New Venture Competition. He was selected as a future biotech/pharma leader by Novartis at a Bio Leadership Camp. He became a fan of Notre Dame football. However, it was the people he met through the program that left the biggest mark.

“The ambition of the speakers shapes who came to visit us, showed me what you can do and normalized ambition,” O’Meara says. “ They became the catalysts for my own career path and choices, which ultimately led me to start a biotech company.”

After a few years working in consulting across United States healthcare companies, O’Meara returned to the United Kingdom. There, he began participating in a program called Entrepreneurs First, an experience he likens to a reality show called Love Island. “The idea was for science people to speed date businesspeople to find their perfect match and start a company. That’s where I met my co-founder in Ochre Bio, Quin Wills.”

Their first meeting was anything but typical. O’Meara was working in Tanzania for a nonprofit. Wills, a former physician from South Africa turned genomics researcher in the United Kingdom, was finishing building a tree house in Costa Rica. During a series of phone calls, O’Meara and Wills determined they were kindred spirits, both with quirky interests, but also a shared passion to leave the world a better place than they found it, as well as an entrepreneurial flare.

“Quin is an impressive guy. When we met, he had just left his role as the head of cellular and systems genomics at Nova Nordisk and had almost 20 years of experience in liver disease drug development,” O’Meara says. “I found his idea of using human livers rather than animal livers to develop therapies for liver disease was highly elegant scientifically. We decided to stand up Ochre Bio as a company committed to making healthy livers available to patients everywhere.”

O’Meara is not one to shy away from a challenge, and he and Wills picked a major one. Chronic liver disease is the only top ten global health threat on the rise. Each year, 1.5 billion new cases are diagnosed around the world. Another two billion people are obese or overweight and at risk of developing fatty liver disease. Liver transplants are often the only treatment option yet less than 10 percent of the global need for liver transplants is met.

“Liver disease is a significant issue, but there’s been little headway to date on effective therapeutics. Ochre Bio is developing RNA therapies for chronic liver diseases using a combination of deep phenotyping, precision RNA medicine, and testing in live human donor livers. One of the big differences in our approach is we replace testing in animal models like mice with testing in human livers. Various liver diseases have been cured in mice, but the technology didn’t translate to humans. We saw a need for a different model of developing liver therapeutics.”

The duo launched Ochre Bio in Oxford, England, in September 2019. While there was a wealth of scientific talent in Oxford, O’Meara and Wills had trouble raising money. “We were flailing around not able to find investors,” O’Meara admits. “We then got an invitation to interview for Y Combinator in California.”

Y Combinator is among the most prestigious startup accelerators in the world. Each year, they invest $150,000 in a number of promising startups and then spend three months helping them hone their pitches. The cycle concludes with Demo Day, during which the startups pitch to a carefully curated, invite-only group of investors.

In 2020, O’Meara and Wills traveled to California to pitch the Y Combinator selection committee. Thinking they had failed, they adjourned to a sushi restaurant for dinner and to commiserate. That’s when they got a call; Ochre Bio was accepted for the next cohort of Y Combinator.

“This was our pivotal moment as a company,” says O’Meara. “Through Y Combinator, we got an introduction to Khosla Ventures. Khosla led our seed round.”

Back in Oxford, Ochre Bio lost no time in building their scientific team. With an overarching vision of developing new therapeutics for chronic liver disease, O’Meara and Wills decided to focus efforts on improving outcomes for liver transplant patients. Demand for liver transplants is high and while treatment is available, it’s extremely difficult finding healthy livers suitable for transplant.

“Obesity has really been the driver of unhealthy livers and low availability of healthy livers for transplant over the past 10 years. Our idea is to treat the donor liver prior to transplant to improve outcomes for liver transplant patients. We take suboptimal livers and treat them outside of the human body to reduce the likelihood of failure,” O’Meara explains. “Ultimately, our goal is to discover how to treat diseased livers while still inside the patient and avoid the need for transplant at all.”

Ochre Bio’s vision is well on its way to becoming a reality. Ochre Bio has established three partner sites in Connecticut, New York, and Oklahoma it calls Liver Intensive Care Units (ICU). These centers accept donor livers not suitable for transplant, keep them alive in special machines, and uses them to test the therapies Ochre Bio designs in Oxford.

“These centers function just like other transplant ICUs. The work is very hard and unpredictable because they never know when they will get donor livers. There has to be a transplant surgeon there to accept the liver. They treat it with therapeutic drugs just as if it were a live patient. This work requires a lot of dedication and passion. We’ve assembled a great team internally, at the Liver ICUs and on our advisory board. Trying to solve important health challenges inspires people,” O’Meara says.

Beyond the complexity of the science and the enormity of the task O’Meara and Wills have set for themselves, the biggest challenge to date has been fundraising. However, O’Meara’s knack for landing on his feet appears to be as steady as always. Earlier this year, the company closed a $30 million series A investment round to support the ongoing development of its chronic liver disease therapies.

Thinking about the founder’s path he’s chosen with Ochre Bio, O’Meara admits the decision to be an entrepreneur and start a company was really hard and emotional. “You have to decide to go for it and have the grit to stay with it. Entrepreneurship is not easy like a traditional corporate career. Surround yourself with people you admire, get along with, and get going.”