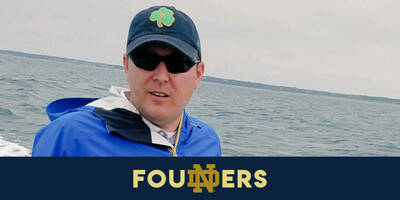 Paul Tencher graduated on a Monday with a degree in Communications from Seton Hall University. On Tuesday, he joined his first political campaign and was hooked. His reason was simple.

Tencher, who grew up in a Rhode Island family of humble means, seems in awe of his rise in political ranks. “Each role was special but serving as chief of staff was the blessing of my life. There were only 100 of us on Capitol Hill. I met people I wouldn’t normally have access to like businesspeople, generals, other senators and their staffs. I also traveled all over the country meeting people. Politics have been a gift.”

And yet, something was missing. Even though he built and orchestrated campaigns with budgets ranging from $20 million to $40 million, people didn’t see Tencher as a businessperson. “Political campaigns are the ultimate startup,” he explains. “You’re building something from scratch. It’s strategy. It’s fundraising. It’s operations. The only difference between a campaign and a startup is campaigns need to spend everything. Winning the election is our pay off.”

In 2016, Tencher made the decision to fill two gaps in his life, one personal and one professional. As a teenager, he dreamed of attending the University of Notre Dame, but wasn’t admitted. Now deep into a successful career, he decided to earn a Master of Business Administration (MBA). There was only one path forward: earn an MBA at Notre Dame.

“I was crushed when I didn’t get into Notre Dame for under grad,” he admits. “As an adult, I felt like my deep experience in public policy wasn’t enough. I needed the ‘seal of approval’ of an MBA. Going to Notre Dame was very important to me.”

For Tencher, the experience was incredible on many levels. Faculty, the coursework, and classmates ignited a passion for entrepreneurship he didn’t know he had. Chuck Bamford, an adjunct professor of Strategy and Entrepreneurship, imparted the life lesson of the scarcity of resources and how to focus on the one or two things critical to success. “I use his system every day for myself, founders and funders,” he admits.

The coursework also gave him a deeper understanding of identifying opportunities and when to take risks. However, it was his fellow MBA students who truly made an impact then and now. Tencher explains. “Later in life it’s hard to find true friends, but my Notre Dame friends and I are thicker than blood. We still are.”

With his MBA and the Notre Dame network in force, Tencher felt a new confidence in Washington D.C. as he operated within the highest levels of the United States Capitol. Although his political career was “a gift,” he also began to think about what was next.

“At Notre Dame, I was amazed by the founders I met. I didn’t want to be a founder; my strength is in operation. I saw myself helping startup companies grow. Promote what’s working well and fixing what was broken. So I began thinking about using my experience in strategic planning, fundraising, branding, political and business intelligence to start a consulting firm,” he says.

Public servants can’t have commercial side gigs. Thus in 2019, Tencher followed his growing interest in business leaving the U.S. Senate to launch a public affairs consulting firm with offices in Rhode Island and Washington D.C. It was, he says, “a leap of faith.”

“I liked the idea of working for myself with clients I respected and found interesting.” He explains. “I named my firm Trustom Strategy, which I got from a national wildlife refuge in Rhode Island called Trustom Pond. It’s a meaningful place to me and my wife and having the word trust in the name didn’t hurt either.”

Tencher’s interest in entrepreneurship was just beginning. In 2021, he joined the IrishAngels Ventures, an angel investment group made up of Notre Dame alumni. Interacting with other investors fueled his desire to help founders grow their companies. “I started investing small amounts of money in early-stage companies. It was easy to get involved but my true interest was breaking into venture capital. Unless you went to an Ivy League school, that’s not easy to do.”

Undeterred, Tencher researched ways to break into venture capital investing. A conversation with a fellow Notre Dame alumnus and founder of Pivot North Capital in Menlo Park, California, Tim Connors, provided an opening. “Tim’s advice was to be very focused in your investing. Find a subject matter expert and break in with him or her.”

A few years prior, Tencher had met Will Sarni, an internationally recognized thought leader, author, and influencer on water strategy and innovation. Sarni is the founder and CEO of the Water Foundry, which consults with global corporations on water strategies. Tencher had found his subject matter expert in an area of critical global interest.

“Water is a dinosaur (industry) that has not been transformed by digital technology. Whether it’s public utilities, corporations or consumers, it is ripe for disruption,” he says. “This was my opportunity to leverage my public policy and business experience in the venture capital arena.”

In 2021, Tencher, Sarni and a two other partners, including a water rights attorney, co-founded the Future of Water Fund. The first of its kind water-focused investment fund in the United States, the private equity fund seeks to invest in innovative water technologies addressing water scarcity and quality issues. “The water issues of the American West are symptomatic of larger global issues,” explains Tencher. “Who controls the rivers, who owns the water, who has rights to the water. Issues with water are happening all over the world.”

He adds, “Climate change is intrinsically linked to water. The American West is one of the world’s most water-stressed regions, and that impacts  business growth, economic development, social well-being, and ecosystem health. Our goal is to find, invest in, and grow companies whose innovative technologies and business models offer promising solutions in the areas of water supply, water quality, access to drinking water, and input and reporting.”

The fund launched with the buzz-worthy announcement of its first corporate investor, PepsiCo, on World Water Day, March 22, 2022. Tencher says the beverage company’s participation in the Future of Water Fund was money well spent.

“Reputationally, we’re a good fit for Pepsi,” Tencher says. “We also give them access to a highly focused deal flow and possible acquisition targets. We are also quantifying everything such as how our portfolio companies are saving water, improving water quality and increasing water sustainability, which is attractive to investors.”

Fundraising has been a priority throughout 2022. Two Notre Dame alumni have come onboard as limited partners, with a target minimum investment of $200,000. To date, most investors are individuals who share the Fund’s commitment to using technology to solve the world’s water issues. “People see it as an opportunity to invest in companies and founders they care about and that are ready to scale. They know they’ll see investment opportunities not seen anywhere else,” Tencher says.

“Currently, drinking water is used to fill toilets, which is crazy. By recycling gray water, Hydraloop has the potential to save 45 percent of a home’s water use and would significantly reduce the load on municipal water treatment facilities,” Tencher explains. “This is a big deal in states like California that have severe water shortages. Hydraloop has a lot of traction in Europe and the Middle East. We think it will have a major impact on the United States, too.”

This is definitely just the beginning for the Future of Water Fund as they look to make more investments before the end of the year. The word is getting out to university technology transfer offices with water technologies that there is a fund devoted specifically to their space. Founders are also eager to tap into the expertise and connections of the fund’s co-founders. Tencher is already looking at raising of second tranche of funding.

Tencher knows he’s setting a high bar; fundraising has been the biggest challenge for the Fund. “I raised money for political candidates for 20 years, and it’s hard! We thought raising for a fund would be easier, but it’s definitely not. Networking and bringing founders and investors together are very important.”

The biggest win to date has been leading the round in Hydraloop; however, Tencher is motivated by the unique opportunity to transform the water industry. “Water is overlooked in the startup world. We believe we can have tremendous impact with the Fund and our expertise due to the nature of the issues that need to be solved.”

Asked what advice he would give others who dream of starting a company, a campaign or a global movement, Tencher offered this: “Follow your passion and stay focused. Think about your focus every day. You have to have guard rails so you don’t get off track.”