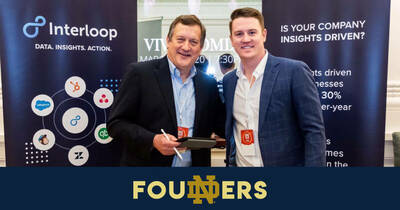 When Jordan Berry and his father Tony Berry decided to start a company together, they had to promise mother and wife Sue that despite the pressures that might occur from running a business together family would always come first. This promise would guide the Berry’s decisions during the tough times that every startup endures.

The perfect time to start the company was 2015. Jordan was a former scholarship swimmer for the University of Notre Dame who had the honor of high-fiving Michael Phelps after the Olympian beat him and scored one of his many world records. Jordan had just completed his second year as a technology consultant with Protiviti in Chicago. While the international consulting firm, he had worked with multiple companies in a wide range of industries. The experience gave Jordan a solid understanding of enterprise level information technology and Microsoft enterprise products.

For his part, Tony was tired of traveling for work. A self-described nerd, he had earned a bachelor’s degree in Electrical Engineering from Notre Dame. He launched his career with IBM in the early 1980s just as Big Blue was getting into personal computers. When IBM introduced strategic and technical sales teams, Tony was tapped to go into high level, complex sales. This launched Tony’s 30-year career in technology sales and customer relationship management.

When Jordan suggested they start their own artificial intelligence (AI) enabled technology company, Tony was traveling every week from South Carolina to New York City as managing director of a technology consulting company. Tired of the nomadic life, he was intrigued by Jordan’s idea of going into business together. “At this point, Sue and I were empty nesters, and we could live and work where we wanted.”

While at Protiviti, Jordan became enamored with artificial intelligence and its potential applications in business. He spent personal time learning the coding behind AI and musing about startups. “I’d seen the movie Moneyball. The lead characters used sabermetrics—sports statistics— to evaluate and hire players, ultimately building a winning team. I thought we could do something similar with AI-enabled statistics to help companies sell more effectively.”

He adds, “I shared the idea with my dad, and he was interested. His career was in selling sophisticated tech solutions and he understood the issues and the opportunity.”

The final decision to go into business together boiled down to one concession. Tony stipulated  Jordan should own a controlling interest in the company. “That was an easy call,” admits Tony. “The company was Jordan’s idea.” Sue was also on board. It was she who came up with the company name, Interloop.

One of their first decisions together was where to locate the company. Having grown up in Fort Mill, South Carolina, Jordan leaned toward the Palmetto State and Tony agreed. Together, they decided on Charleston, South Carolina, for their new home base. With its rich history, diverse culinary and arts venues, beaches and nearby barrier islands, Charleston is best known as a tourist destination. However, it was the city’s emerging tech scene anchored by the Harbor Entrepreneur Center and the Charleston Digital Corridor and quality of life that attracted the Berrys. They soon connected with local resources as they fine-tuned their prototype that paired AI with customer relationship management (CRM) software.

It was during this pre-launch period that the Berrys shared their idea with one of Tony’s consulting clients in the media industry. Their sales team was struggling with how to sell complex deals. Even though the technology was not yet commercial, the customer saw the value and wanted it. Says Jordan, “They became our first customer.” With this validation, Interloop was officially in business.

As the Berrys delved into their first engagement, they uncovered a hard reality. Artificial intelligence and machine learning require a tremendous amount of data to recognize and anticipate patterns to provide actionable data. The client’s company had a lot of data, but it resided on different platforms and applications. There was no easy way to collect and aggregate the different data sets.

This initial implementation failed. There simply wasn’t enough data to feed the Interloop solution. “Thankfully, the client wasn’t fazed. They continued to work with us and are our oldest customer,” Jordan says.

After five or six other prospects pointed to the same problem of being unable to access fragmented company data, the Berrys realized they were trying to solve the wrong problem. The founders decided to move away from AI to data engineering, a more sellable solution. Jordan refers to this as “data plumbing.”

“As companies have become more reliant on digital solutions for virtually every aspect of their businesses, they’ve also realized  a problem. Each platform, whether it’s Salesforce, NetSuite, Zendesk, or QuickBooks, generates a wealth of data. But it all ‘lives’ in silos. While some products like Salesforce do integrate with other platforms, most don’t, or at least don’t do it well,” Jordan explains.

“So three years into Interloop, we pivoted and now offer a cloud-based, full-stack modern data platform plus consulting services. This gives customers access to all of their data, so they get comprehensive data-driven insights they never had before to help drive growth.”

The pivot also included a better understanding of Interloop’s sweet spot in terms of customers. Tony says the ideal clients are upper middle market, with revenue of $100 million up to $1 billion that have implemented multiple applications. These companies often don’t have an internal data team dedicated to harnessing data for the business.

“Where we are seeing the most traction is with manufacturing and distribution businesses,” Tony says. “Clients are also coming from private equity groups that have acquired privately held businesses and need they better data insights. This is a good point of entry for us.”

The global pandemic and economic shutdown of 2020 impacted Interloop but only temporarily. Says Tony, “Things slowed for about six months. We focused on keeping things moving. What’s been interesting is once we were out of the pandemic, data became really important to companies. They had a more intense need to track costs, measure productivity and make data-informed decisions.”

As the economy has powered back up, so has demand for Interloop’s services. The company now has nearly 50 clients spread across Boston, California, New York, and Texas. They are also working with Microsoft and their Software Vendor Program to reach new customers. Other strategic partnerships help with their new business pipeline. Another plus is that Interloop’s clients are very sticky. “Our churn rate is low. In seven years, we’ve lost just a few clients,” Tony says.

The Berrys have built their company with minimal investment. Other than a $45,000 that came from accelerators and winning pitch contests, the Berrys have bootstrapped Interloop. This was possible by keeping a tight handle on overhead. Tony believes the hard times of the global pandemic made companies come to grips with what’s really important, and it’s not large fundraising rounds and inflated valuations. “People once again value revenue and profit as measures of success,” he smiles. “I’m not sure how business got away from that.”

He has reason to smile. Interloop continues to grow and has doubled the size of its team.  “We’ve been profitable from the beginning. I’m really proud of achieving this milestone. It’s a big win for us”.

Jordan also cites growth as a big win, but from a different perspective. “When we started Interloop, it was just me and Tony. Today, we have team of ten, and all but one lives in Charleston. Because of this growth, we’ve moved our office space four times this year to make room for the new people.”

Finding and hiring tech talent in Charleston has required significant bandwidth. Graduates of the College of Charleston and The Citadel typically leave the city to launch careers. To counter this, the Berrys are launching their own data engineering bootcamp, in coordination with the Charleston Digital Corridor, to recruit and transition college students to succeed in the technology industry. In talking with recruits, they stress the importance of balancing where you live with what you do. With a great climate, walkable city, beaches within minutes and a growing tech company with a national clientele, the Berrys are confident they will reach their target of 50 employees sooner rather than later.

To stack the deck in their favor, they also reach out to talent at other universities such as Notre Dame. For the last three years Interloop has hosted a group of Notre Dame MBA students for a week-long, inter-term class project. “We embed them into our company  to experience working for a tech startup firsthand,” Tony explains. “This year, they will be doing a market analysis project for us, which is helpful for us and a learning experience for them.

He adds, “Maybe a week in Charleston will bring them back to Interloop when they graduate.”

The father-son duo has this advice for those wanting to start a company and those who want to start one with a family member. Tony jumps in first.

“Don’t get caught up in thinking you’ve solved the problem out of the gate. Business is dynamic. You can’t be afraid to adjust. It’s very likely your third idea is the one that has traction,” he offers.

In terms of working with family, he advises founders to keep business and family conversations separate. “I think it’s easier for the parent than the child to be in business together. We’re used to leading our families. To ensure this thing worked, we had to have ‘guard rails’ separating our personal and professional relationship. In our case, Jordan calls me Tony at work and dad at home. That’s an easy cue about what a conversation is about. Family-owned businesses would do well to establish guard rails upfront.”

Jordan says founders must realize startup companies are like rollercoasters and to be okay with the ups and downs. “Everything takes longer and costs more than you expect. It’s taken us seven years to mature as a company. It’s taken time but look at what we’ve accomplished despite a pivot and a global pandemic. Also, not every startup is disruptive. You don’t have to have a brilliant idea, but you do have to fill a need.”

Regarding being in business with his dad, Jordan adds, “The family dynamic is our superpower. We have innate trust in each other as co-s.”