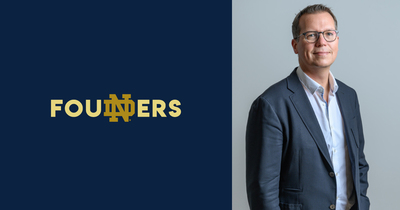 How did a native of Strasbourg, France, an entrepreneur building a medical device company based on virtual reality and medical hypnosis, become a University of Notre Dame football fan and an alumnus?

It turns out that Strasbourg’s international sister city is Boston, Massachusetts. During his teenage years in the early 1990s, Schaettel spent a summer in Boston. “My host family was Irish Catholic, and we watched a lot of sports, including American football. When I returned home, Strasbourg was one of the first cities in France with cable TV. What came up on the sports channel? Notre Dame football,” he says.

“I loved the United States and Notre Dame seemed to be really awesome, a special place, so my ambition became going to school there.”

With a few options available, Schaettel specifically chose his business college, EDHEC Business School in Lille, France, because of its exchange program. His plan was to earn a Master of Business Administration at Notre Dame, focusing on financial markets and applied investment management. From the moment he arrived on campus, he felt at home. “The students and the faculty made me feel I was in the right place.”

Graduating a year later, Schaettel walked away with two lessons that have directed his approach to life and business. “The number one lesson I learned is to always be open minded. I was from another country, and I wasn’t Catholic, but there was never a feeling of exclusion. My feeling was always one of inclusion,” he says.

“The second lesson is never to put business before people. Life is about relationships.”

Returning to Europe, Schaettel spent the next 20 years working in London, Paris, Luxembourg, and Strasbourg with corporations including MSN and PayPal building a  knowledge base in digital technologies. His roles were diverse, from equity marketing to sales and business development to consulting, and most notably, product management. With each career step, his understanding of how to lead, run and grow a business grew. Eventually, he founded a tech startup and did very well.

In the spring of 2016, a friend approached him about two anesthesiologists who wanted to start a company but needed a co-founder with business and tech expertise. Their idea was to treat pain and anxiety with medical hypnosis and virtual reality.

“It sounded very curious but interesting,” explains Schaettel. “I associated hypnosis with performers in Las Vegas. Virtual reality was a gaming platform. But I was open to meeting with Dr. Chloe Chauvin and Dr. Denis Graff. It was definitely worth a good dinner and wine.”

When the three met, Schaettel did little to hide his skepticism. The physicians; however, came prepared. They shared clinical studies they had done on the effectiveness of medical hypnosis and virtual reality technology in treating pain and anxiety in a variety of patients and conditions. The conversation—and the wine—flowed. Schaettel’s mind began to open to the idea.

“The physicians explained how their idea would help people deal with the negative stress, anxiety, and pain they feel during various medical and dental procedures by immersing them into a 3D multi-sensory experience that places them in a comfort bubble. It could be used with a wide range of patients, from the elderly who don’t tolerate anesthesia to children who are very afraid of doctors and dentists, and everyone in between,” he explains. “If it worked, we could help many people.”

Unlike many company founders who have direct experience in the market they are addressing, Schaettel had no experience in the healthcare industry. He suggested to Dr. Chauvin and Dr. Graff that they dedicate six months to exploring how the business would work. The time together would determine if they wanted to embark on the journey together.

“We spent good quality time, enjoyable time,” Schaettel says. “It goes back to the importance of relationships in business. We should enjoy the people we do business with.”

The more Schaettel learned about medical hypnosis and virtual reality, the more he believed in the benefits of the approach. Medical hypnosis is a well-structured, proven technique for taking people’s mind’s away from the here and now. When coupled with a cutting-edge, multi-sensory virtual reality experience, the relief  is heightened exponentially.

“The idea is not to replace anesthesia and drugs, but to diminish the volume of anesthesia used. However, there are some cases where patients are given sedatives to relax and they are no longer needed,” he says. “The benefits are significant: changing negative experiences to positive, avoiding the nausea and potential addiction caused by opioids, giving older adults an option to general anesthesia, and calming children during doctor or dental visits. My passion is using technology to make life easier and better for others and myself. Seeing the impact of what our tech could do became a major driver for me.”

When the six-month exploratory period was completed, Schaettel and the two physicians agreed they had a real company. HypnoVR was born.

Over the next several years, the three co-founders continued to develop the platform, which includes the hardware, the process and software as a service. They started with a surgical application and have since expanded out to address more than 30 medical specialties including emergency medicine, medical oncology, and dental surgery. It also addresses specific procedures such as dialysis, chemotherapy, radiation therapy, and diagnostics tests like MRIs that can be stressful for patients of all ages. The physicians have continued their research and have amassed over 15 published clinical studies that demonstrate the efficacy of HypnoVR in wide-ranging settings.

What excites Schaettel is the ability to personalize the experience of each patient. “The patient wears a noise-cancelling virtual reality headset. They choose from multiple high-definition visual universes—an arctic forest with reindeer, a tropical beach, a mountain lake with hot-air balloons, a coral reef, outer space, and a Zen garden. The experience also includes musical compositions that integrate recognized principles  of musical therapy. The last component is a human voice, male or female, that takes the person on their journey, all of it available in ten languages.”

He adds, “What is amazing is how simple it is  for the clinician to launch the session; it takes less than a minute. The session is remotely controlled and monitored by the clinician via an app on a tablet or smart phone.”

HypnoVR is currently available in Europe, with strong interest in the United States and Asia. The response from physicians has been extremely positive. “It is very rare that we talk to a physician, and they say they are not interested,” Schaettel says.  “They are all dealing with stressed patients who are feeling pain. They like having an option to chemical anesthesia.”

Not that there are no challenges to adoption. Getting hospitals and clinics to pay for the device and software is a challenge as HypnoVR is not currently covered by insurance despite having a code for reimbursement. The second hurdle is integrating its use into traditional clinical paths. Once physicians and dentists are familiar with how to use HypnoVR, it’s hard for them to put it down.

“We have one doctor who says he carries it around like a stethoscope. Another has done more than 600 sessions with it,” Schaettel says. “What wins the hospitals over is the impact on patients and the bottom line. Patients who require less anesthesia generally have shorter hospital stays. Also, relaxed patients make treatments more efficient. Lastly, the overall ease of use wins people over.”

There is another secret sales weapon: Schaettel’s very low-pressure approach to sales. “We tell the doctors, there is zero commitment. You don’t have to sign a three-year contract. Just use it and see if it works. It gets back to what I learned at Notre Dame. Don’t forget the people side of business. Do you want short-term financial gain or a long-term relationship?”

It’s a compelling argument and approach. Today more than 270 healthcare institutions across Europe use HypnoVR. The founders are now looking to Asia and America as future markets.

When the company was founded, Schaettel and his physician partners put in their own money to get HypnoVR off the ground. Since then, they have received grant funding from the city of Strasbourg as well as the Alsace region where they are located and have a team of 25 employees. They have also raised $12 million Euros in a seed round and a Series A round. The funds are being used to scale the company across France and Europe as well as to secure the appropriate regulatory approvals.

Schaettel says the biggest challenge to date has been going fast but not too fast. “As an entrepreneur, you want things to go fast. However, in health care, you realize things take time. Striking the right balance is important. Making progress without making poor decisions is the goal.”

His biggest win to date is more personal. “The wins come from the doctors and patients and the impact we are having. We did a trial at the May Clinic in Jacksonville, Florida, with a 100-year-old woman having hip replacement surgery. She came through fine. That was an incredible win.”

Recently, Schaettel was invited to present HypnoVR to 20 executives with a large insurance company. That in itself was a breakthrough, but the bigger impact was made when one of the insurance people raised their hand an gave an unexpected personal testimonial.

“A woman said her daughter has scoliosis and the doctor used HypnoVR for her daughter’s back surgery. She was pleased because the day after surgery, her daughter was sleeping peacefully without pain. This for me was a marker of success. It’s what keeps me going,” he says.

Schaettel offers this advice to others who want to begin an entrepreneurial journey. “It is both a sprint and a marathon. If you are going to do it, be ready to commit yourself 100 percent. Learn how to make decisions without over thinking. Once a decision is made, don’t regret it. Keep going.”