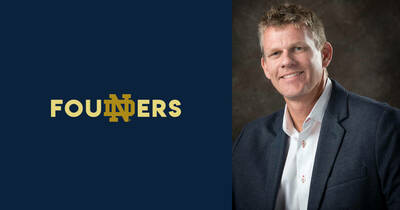 Brent Kleinheksel was a born entrepreneur. He loved to work and make a buck. At age eight, he was digging up nightcrawlers to sell as bait to fishermen in his hometown of Holland, Michigan. Later, he washed and detailed cars. “I learned an important less,” he says, “I loved working for myself. I wasn’t good at working for others.”

His father was in the real estate business so after college Kleinheksel launched his own career in commercial real estate with Grubb & Ellis in Tempe, Arizona. While there, he dabbled in computers as he researched various properties. “I discovered that technology was a good fit for me. I also determined if I was going to advance my career, I needed an MBA.”

He hopped a bus and headed for the East Coast to visit universities and check out their programs. The University of Notre Dame was his top choice. “They showed an interest in me. When I was accepted into the program, it was an easy choice,” he says.

After starting classes, he came to truly understand the value of Notre Dame. Many of his classes had an ethical component. “That really challenged me,” he says. “I considered myself a good person and knew right from wrong. But in business there are a lot of nuances, and my classes really opened my eyes to ethics in the business world. It inspired me to conduct myself in business in an ethical manner.”

Among the other benefits of attending Notre Dame’s MBA program was its recruiting program. Within a month of graduating, Kleinheksel landed a position with IBM and joined their operation in Chapel Hill, North Carolina, as a product marketing manager for ThinkPad. The business-oriented laptops and tablets were a premiem IBM brand. The company was considering a brand extension into the student market called the ThinkPad iSeries®. However, some within IBM were hesitant to “mess” with the ThinkPad brand. That reluctance, says Kleinheksel, made for a challenging assignment, one that was hard to progress.

The other challenge was working within an IBM cubicle farm. The memory makes Kleinheksel wince. “There were thousands of nameless people slaving away in cubicles. It was not a fit for me.”

He did; however, connect with a fellow in another cube who would eventually return Kleinheksel to his roots. “Here was this crazy guy who was four levels above me who didn’t follow IBM rules and it didn’t matter; they let him,” Kleinheksel explains. “He was an amazing entrepreneur within IBM and would invite me to meetings. He encouraged me to come up with my own ideas.”

One of those ideas was a foldable computer keyboard. Kleinheksel shared the idea with his mentor in the other cube, wondering out loud where he’d get the money to bring the idea to life. “He pointed me in the right direction: angel investors.”

A light bulb went off, and Kleinheksel quit his job with IBM and launched a startup dubbed PlanetPortal in the Research Triangle. He also started lining up meetings with potential investors. It was a slog until one day it wasn’t. “I flew to San Francisco for my 151st meeting,” Kleinheksel recounts, “and the guy liked my idea. Withing a couple of days I had a couple of million dollars in the bank and was on my way.”

Over the next three years, he raised another $8 million and hiring 50 people. He also succeeded in building a hardware portal. In the process realized he wasn’t enjoying what he was doing. “I had become a slave to the investors,” he says. “I decided to sell our intellectual property and leave the company to do something at an entirely different scale.”

Different scale and entirely different location. Kleinheksel, his wife, and young daughter moved back to his hometown of Holland, one of Michigan’s most beautiful resort towns, to purchase and run a small resort with his father. Called Rosewood Pointe, the property included eight cabins and several homes, including one with 10 bedrooms that slept 35. What made the property unique is the Kleinheksels would rent out the entire out the entire resort for family reunions, weddings and other large gatherings. With its proximity to Lake Macatawa and Lake Michigan, guests could also bring their boats.

“It was an interesting endeavor,” Kleinheksel says. “In addition to me and my father, my grandfather was also working with us. The physical work of running a small resort was fun after what I’d been doing.”

There was one thing that bothered him. The software he was using to manage the resort was inadequate. Thinking he might develop something of his own, he decided to register the domain name Lodgix.com. Busy with daily operations, he didn’t do anything with it until a chance meeting with a former high school classmate at Walmart. He was now a web developer, so Kleinheksel shared his idea and was delighted with the response.

“He liked the idea and gave me some ideas on how to get started,” Kleinheksel says. “Another lesson learned during my Notre Dame MBA days was not to be afraid to talk to people about my ideas. And in this case, the advice really paid off.”

At the time, eBay had a section for selling businesses. Kleinheksel found and purchased a small software company that he could customize to run his resort’s bookings. Soon, Rosewood Pointe was enjoying high occupancy rates and rates 25 percent higher than other resort properties.

“Other people noticed and wanted to know what I was doing. When I told them about my software, they wanted to use it, too. At first, I didn’t want to give away my competitive advantage, but I went ahead and let them use it, too. A rising tide will float all boats, you know,” he laughs.

Over the next two years, word of mouth spread and the Lodgix web-based platform was developing into a pretty nice side business. What started as a web-based solution to manage bookings began to add more functionality. “I hired developers and painted a picture of how I wanted the website to work, and they made it happen,” Kleinheksel explains.

Seeing the largely organic growth of the Lodgix platform and sensing his family’s fatigue with duties like making beds, cleaning rooms and chopping firewood, Kleinheksel decided with his father to sell Rosewood Pointe and return to the tech industry. Free of the day-to-day operations of managing a resort, he was now able to concentrate on developing more complex functionality for Lodgix, including integrating booking sites like VRBO, Airbnb, HomeAway, Expedia, and other channels.

Lodgix continued to grow thanks to the functionality, but more importantly, how easy it was to use and the fact that it was bug free. “Our uptime was nearly 100 percent. If people did have a problem, we personally helped them through it. We were also competitively priced,” he explains.

Kleinheksel purposefully grew Lodgix slowly and steadily with an eye on loyal, happy customers. “Traditionally, software companies raise as much money as they can so they can grow as fast as possible and exit. The acquirer has to make money and will start cutting functionality and head count to get their cut. That creates customer churn, and that’s exactly what I didn’t want.”

When Lodgix launched, their typical customer was the individual owner of family vacation property they wanted to rent when they weren’t using it. The price point was $9.99 a month to use the platform. Today, the typical Lodgix customer is a property management company with multiple properties along with inns, boutique hotels and bread and breakfast inns. The price point is now $499 a month after a free month’s trial. “We found it was just as easy onboard larger  property management companies and more lucrative. We adjusted to a more B2B model,” he says.

What’s been most exciting is seeing Lodgix scale beyond the United State market. Kleinheksel says the company now represents 25,000 vacation rental properties around the world. The expansion started by meeting people at trade shows, building up hundreds of positive online reviews, and keeping their website fresh, functional and exciting. Business development accelerated with Zoom, which made it easy to do virtual demos of the platform.

Says Kleinheksel, “Then what typically happens is competitors of our new customers see what they’re doing and want to use Lodgix, too. If you put out a good product, customers come your way based on recommendations of others. Controlled growth based on happy customers is our business model.”

He also has stressed maintaining a high quality of life for himself and his people and keeping overhead low. Lodgix is located in the small town of Elkin, North Carolina, which in itself is a tourist destination. Surprisingly, the Kleinheksels are not world travelers; they prefer to explore the mountains and beaches of their North Carolina home state.

Unlike his first startup, Kleinheksel has never accepted any outside investment dollars for Lodgix, preferring to bootstrap the company on his own. “When you take on investors, you become beholden to them. I didn’t want that with Lodgix. Fortunately, that has worked out. What has been a challenge in recent years is finding good employees. The employment rate has been really low the last few years, and with the pandemic, attitudes have changed. Productivity has gone way down in the United States, people are job hopping, and they don’t want to work hard. The first question applicants ask is ‘how much vacation time do I get and how much will I make? My goal is to surround myself with smart, hard-working people, but that’s really hard to find these days,” he says.

Another challenge is the keeping his product relevant. “The hospitality industry is constantly changing, and the pandemic really had a hand in that. Surprisingly, more people traveled, mainly extended stays where they could continue working, during the pandemic. That impacted how and what they were booking. I have to continue to invest in Lodgix to make sure we have new and cool applications in our software. It’s shocking to think how many times we’ve recoded our entire platform.”

The recession and hyperinflation the United States is currently experiencing is causing a new set of problems. Bookings in 2022 are not as strong as the previous year due in part to rising rental rates. Kleinheksel has not yet raised prices for Lodgix customers but knows that day will come. “Margins can only get so small,” he says.

When asked what his biggest win has been with Lodgix, Kleinheksel thought carefully before answering. “As an entrepreneur, I read a lot of self-help books over the years, and the advice they give is to ‘think big!’ While I set high goals for myself—Lodgix was responsible for over $1 billion in vacation bookings in 2021—I don’t consider that my biggest win. Instead, it’s building a small, very capable company of 11 employees and thriving after 14 years. Most small Internet companies don’t live beyond 10 years and yet here we are still flourishing.”

Kleinheksel offers this advice to others who would like to leave the corporate world and strike out on their own: Pay attention to what you’re doing and tune out the rest.

“So many people today are tuned into social media and spending their time looking at what other people and companies are doing. That’s a distraction. Focus on what your business, your product, and your team. Give it what it needs to grow over the long term. Also, never forget the need to constantly improve your product even if it’s incremental improvements. The world is changing but not as quickly as you think.”