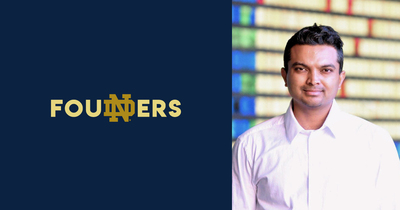 Even as a child growing up in Chennai, India, RaviKiran Gopalan had a fascination with engineering. That fascination coupled with a talent for math and physics took him a world away, first to South Bend, Indiana, and then to Silicon Valley. It also ignited a passion for entrepreneurship.

“I did very well during my undergrad at the Indian Institute of Technology in Madras. I made an intentional choice to pursue a doctorate in Electrical Engineering in the United State,” he says.  “My university had multiple senior students who had gone to the University of Notre Dame because of its prominence in wireless research. I applied and got a scholarship.”

Notre Dame’s Wireless Institute, then under the leadership of Bettex Chair Professor Emeritus Dr. Daniel Costello, was a big part of the attraction. The opportunity to work and learn with an expert had great appeal. So much so that three of Gopalan’s classmates also chose to leave their home country to earn their doctorates at Notre Dame.

On arriving in South Bend, Gopalan was surprised at how welcoming everyone was. “Notre Dame is very exceptional in how they treat people. When I got to campus, I received a lot of assistance getting my life setup in America. Since I had no point of reference, I thought all universities were like this.”

While a student at Notre Dame, Gopalan did a one-year internship with Bell Laboratories. His focus was the mathematics of communications. The experience set him on a path in the wireless communications industry. After graduation, he spent a year with Texas Instruments as a senior system engineer before joining Qualcomm, where he worked on the company’s flagship wireless projects.

Qualcomm is a leader and innovator of wireless technology. The San Diego-based company owns patents critical to 5G, 4G, CDMA2000, TD-SCDMA and WCDMA mobile communications standards. It looks to its team for the next big idea, sponsoring a program called Qualcomm Impact. Gopalan found himself increasingly curious about innovation and entrepreneurship. His first experience was an Android Hackathon and his team won. “This was the first time I started with a pure idea, developed it and presented to an audience,” he says.

Curiosity may kill a cat, but it ignited something within Gopalan. He entered Qualcomm Impact, a company-sponsored program in which employees submit ideas and build a team to advance the idea. His team was chosen as one of the finalists to present. He was named an Innovation Catalyst, and in this role mentored others at Qualcomm to develop ideas.

It was Gopalan’s team that developed Qualcomm’s first Bluetooth 5.0 chip. “The goal was to extend the range of Bluetooth by three or four times. I submitted the idea and formed a group. Our design was chosen to advance, and I guided the development team. Qualcomm commercialized the technology and was the first telecom company with that chip.”

He adds, “The process taught me about entrepreneurship and leadership.”

Gopalan realized other benefits from Qualcomm Impact. It was there he met his future co-founder, Anand Chandrasekher. “We shared similar interests in innovation and were both interested in creating something of our own. In the back of my mind, I wanted to go beyond engineering and learn more about sales, marketing and project management. I decided to quit my job and go back to business school full time. Anand, already a veteran in business, stayed at Qualcomm, but we remained in touch.”

During his time in the Stanford University’s Graduate School of Business Management Program, deep technologies like artificial intelligence (AI) and machine learning were hot. “The hype cycle was in full swing,” Gopalan says. “I was curious how I could apply AI and machine learning to wireless technology. Collaborating with other students, I determined there was a lot that machine learning can offer wireless. There was an opportunity to combine the two methodologies into new tools to solve longstanding problems.”

In 2019, Gopalan reconnected with his former Qualcomm colleague, Chandrasekher, who was no longer with Qualcomm. After many discussions on how best to apply deep tech to wireless design, the two co-founded Aira Technologies—Gopalan as chief technology officer and Chandrasekher as chief executive officer— with two wireless researchers, Dr. Pramod Viswanath, a professor at the University of Illinois, and Dr. Sreeram Kannan, professor at the University of Washington. The objective was to develop a software system that would leverage machine learning to improve the efficiency of wireless connections. This would enable breakthrough benefits in battery life, latency and reliability.

With more than 90 years of experience between the four co-founders in university research and in corporate environments, Aira boasted a wealth of talent and a deep understanding of the wireless industry’s pain points. On a very basic level were problems with feedback and dropped calls that disrupt customer service and satisfaction. The cost of developing and maintaining infrastructure were growing issues, particularly as users are demanding more and more bandwidth to enjoy their smart devices.

For the next two years, Gopalan and the Aria team focused on solving these problems and developing a product with machine learning. As they worked, Gopalan grew more excited. “Machine learning is great at recognizing patterns. We were applying this to wireless technology to automate the de-mapping process. We proved machine learning worked in a real wireless network,” he explains.

The Aira researchers wrote a paper to demonstrate proof of concept, which was critical to fundraising. One of the biggest challenges the company has faced is fundraising.

Gopalan explains, “Deep technology is a different kind of startup and requires a different type of investor. Their interest is not based on your current growth and recurring monthly revenue. They have to have the ability to extrapolate what can be rather than what is. They also have to be passionate about the technology and believe in the potential outcome. And being a mature industry, the wireless space doesn’t have a lot of startups.”

He adds, “What ultimately helped us was our research paper, but equally important, the backgrounds of our founders. All four of us are experts in wireless technology. Because of Anand’s and my time at Qualcomm, we know people in the wireless space, investors and customers.”

Aira raised its first tranche of $5 million in early 2020. Their second round of $8 million was completed in September 2021. The round was led by Neotribe Ventures and Acrew Capital with participation from Foothill Ventures and industry angels Ryan Drant, a founding partner with Questa Capital, and Carl Waldspurger. These funds have been used to process cellular signals using machine learning.

Venture capital support has also enabled Aira to build out its team. Now located in a 100-year-old horse barn in Saratoga, California. Despite the difficulty of hiring people with deep tech experience, the company now boasts 15, including full-time employees, consultants and interns. Gopalan smiles at the progress. “We have an amazing environment and team; and we’re

Aira is currently working on its go-to-market strategy. Customers are network operators, the AT&Ts of the world, that install and maintain base stations . Wireless infrastructure is expensive, Wireless users—every person with a smart phone—are demanding and frugal. Neither wants to spend more than they have to.

“One big advantage of Aira’s machine learning software is that it requires less infrastructure. If you are more efficient, you require fewer base stations, which reduces cost to purchase and maintain. With fewer towers, less power is required to run them. This impacts how much companies charge customers,” Gopalan explains.

With everyone using their phones to stream Netflix, game and shop, wireless providers need more robust, more efficient infrastructure. The answer is smart technology like Aira’s machine learning that automatically fixes problems without manual interaction. Still, there are skeptics who one, don’t see a problem, or two, don’t see deep tech as the answer.

Gopalan admits the response to their software has been varied. “Wireless is a mature industry, and people have deeply held beliefs about how wireless should be done. We are positioning Aira as a new toolkit, agile development for wireless networks. Will we be successful? I think so. We’re like electric vehicles. It took Tesla to come along and challenge the combustion engine. Now the world is moving to electric vehicles. We believe there is room for better ways of doing it and customers will eventually come.”

Still, it’s not easy and even having an office in a historic, charming barn only takes you so far. “It’s a big rollercoaster. I have moments of doubt and question our vision. There’s this constant loop of questioning  your work and answering it with the help of your team and advisors. Wireless has a lot to be reimagined; we are breathing new life into the industry,” says Gopalan.

The wins along the way keep him motivated. “I was interested in creating something and was lucky to work for a large corporation where I was encouraged to dip my toes into innovation. Not everyone has the opportunity or luxury to do this.”

Asked what advice he’d give to entrepreneurs in tech or are involved in mature industries, Gopalan instead asks this question: “Are you passionate?”

“If you are, do it. Make yourself vulnerable. Ask for help. Commit. Do these things and things will happen.”