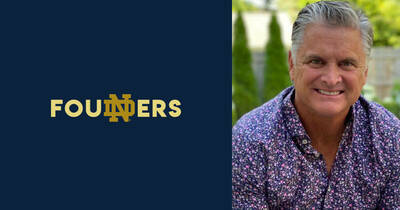 As a middle child in a large Irish Catholic family, Mike McInerney had to be scrappy, or risk being overlooked. “No one was going to take my hand and show me the way. I had to do things on my own,” he says.

Although his father had not gone to college, he had high hopes that his son would attend the University of Notre Dame. From an early age, that was McInerney’s goal. When something got in the way of achieving this goal—his high school grades—McInerney didn’t give up. He enrolled in Michigan State University and while he worked on bringing his grades up, kept applying to Notre Dame.

“I applied twice during freshman year and twice my sophomore year. I think Notre Dame got tired of hearing from me as they finally admitted me,” McInerney explains. “By that time, I had joined a fraternity at Michigan State and had a lot of buddies. I didn’t really want to transfer.”

His family had other ideas. In fact, they were throwing a party to celebrate the news. McInerney laughs at the memory, “I couldn’t say no to Notre Dame.”

In the fall of 1985, he packed up a backpack and U-Haul and moved himself to South Bend. At the time, many juniors spent the year abroad. As a junior transfer student, McInerney was kind of an odd duck. Fortunately, he landed in Dillon Hall where he proceeded to make lifelong friends. Still, it was an adjustment. Michigan State has 38,500 undergraduates. Notre Dame has about 8,800.

“What stood out to me was the intellect of Notre Dame students. It was school first and then social life. I had to learn to hunker down academically,” he says. “Notre Dame requires tremendous discipline, but that sets you on a course for success.”

After graduating, McInerney moved to Chicago to work with a dorm mates’ family business, Romano Brothers Beverage Company. “I was selling Gallo Wine. They had to let me go as I was drinking all of the profits,” he says, laughing at his joke. “Actually, I wanted to go back home to Detroit.”

Awaiting him was a job with his family’s business.

The family business was cars. The McInerney clan—his father, uncles, cousin, and brothers—owned McInerney, Inc., which had multiple car dealerships in the Detroit area selling Chrysler, Dodge, Cadillac, Ford, and Lincoln. The 22-year old was given the job of management trainee, working in the finance and insurance office.

“I was responsible for taking car buyers through the credit office, selling extended warrantees and other aftermarket products. I also helped those with not-so-great credit qualify for auto loans,” he says.

Right out of the gate McInerney got innovative. “Everyone in the car business has a ‘pay plan’ for how they’re going to make money. Mine was to sell more extended warrantees. I started a direct mail program to people who hadn’t bought an extended warranty. It included a fake check for $500 to get their attention and come back for a service agreement. This was in 1988 and nothing was automated. I did it all by hand.”

His idea paid off. “It was fantastic! People came in with their checks and bought the extended service plans.”

The response to McInerney’s creativity was mixed. The car business is very traditional. In 1988, there was little or no innovation and hadn’t been in 70 years. This didn’t set well with the management trainee. “I was always trying to fix things. I had a lot of curiosity about doing things differently, but the family wouldn’t bend. The old guard was happy with the status quo. Not me.”

Soon McInerney was investing in startup companies. One day while golfing, he met a guy who owned tech companies. Their conversation opened his eyes. “He had a whole different way of thinking and working. I realized there was a whole new world out there that was faster, more exciting and collaborative. People came up with ideas, threw them at the wall and saw what stuck. I really took to it.”

He joined Quantum Digital Ventures, a large format graphics manufacturer, rising to executive vice president over sales for multiple business units. The core business was large format printing. McInerney found the technology and all of its applications fascinating. Funny thing, the car business wouldn’t release its grip on him.

“I continued to get calls from past customers who wanted my help in buying a new car. One of them was an elderly priest, Father Flannagan. I couldn’t say no to him. I picked him up at his home, took him to the dealership, helped him decide on a car, and walked him through the purchasing process. I got in God’s good graces with that one, “ he says. “It made me wonder if there was a business there.”

Meanwhile, in an effort to branch into vehicle wraps, his team thought to target small business fleets.  “They threw together a website and spent a little money on GoogleAds to generate leads and had a lot of  immediate responses. It was the most fantastic thing I’d ever seen and so much better than waiting in a showroom for customers. The internet became my obsession.”

McInerney began throwing ideas at the wall and the one that stuck was to create a website where car buyers could come, complete an online questionnaire on what they were looking for in a new vehicle, and he would find them the car. He shared his idea with a web developer, a Millennial, who loved it. “He’d just bought a car and said it was the most difficult thing he’d ever done. For him, having to deal with a salesperson in person was a negative.”

McInerney began putting more time into his idea, and in 2013, launched Deliver My Ride, generating customers with pay per click campaigns. “Basically, it was a broker model powered by the Internet. I worked with a number of dealerships, displaying and selling their inventory on my website.”

His experiment worked. People were using Deliver My Ride to find and purchase cars. The early success made McInerney want to move faster, but he needed outside capital to fuel his previously bootstrapped company. Over the next two years, he talked to everyone he could about Deliver My Ride and its potential before meeting Pete Karmanos, founder and former CEO of Compuware, a visionary businessperson.

Karmanos, who had experience working with the “Big Three” automakers in Detroit, loved the auto-disrupter idea. He invested $60,000 in seed money to build out the website. Over the next year-and-a-half, Karmanos invested an additional $1 million, which allowed McInerney to hire developers, project managers and marketers. Ultimately, Karmanos invested more than $5 million in Deliver My Ride.

“To his credit, Pete never changed his terms,” says McInerney. “He saw progress and the dedication from me and my staff and continued to support us.”

With funding, McInerney was able to shift into overdrive with Deliver My Ride. However, building the platform, fundraising, and working with a board of directors was a heavy load. “I had no previous experience doing this. I learned how to deal with tough questions.”

Meanwhile, some of the car dealers selling through Deliver My Ride began to see the online marketplace as a lead generator as opposed to a digital sales solution. In typical fashion, McInerney recalls, “I just couldn’t change their stripes.” To get around this, he bought a small Chrysler, Dodge, Jeep, and Ram dealership in northern Michigan where he could test new concepts without any pushback.

By 2019, Deliver My Ride was fully operational. McInerney had succeeded in creating an online marketplace where people could shop for cars from an inventory of more than 10,000 new and used cars and trucks and have their vehicle delivered by a local dealer. Pricing was aggressive, transparent and included all dealer incentives. The site included helpful automated leasing and payment calculators so customers could determine how much they could afford and complete a credit app online instead of going through a dealer finance department. For buyers of any age, Deliver My Ride was, in McInerney’s words, the Amazon of car buying.

Just when McInerney felt he was in the driver’s seat, competitors like Carvana and Vroom grabbed market share. The global pandemic struck causing unforeseen chip shortages that slowed manufacturing in the automotive sector to a crawl. Competition for used vehicles was and remains fierce. Supply chain disruptions caused further complications.

What really smacked Deliver My Ride was the cost of driving traffic to the website. “When I started selling on the web, we could spend a couple hundred per week with Google and drive a lot of traffic to our website. By 2020, we had to spend upwards of $50,000 a week for traffic,” explains McInerney. “That was not sustainable for us.”

As he had done so many times in the past, McInerney pushed through the car industry mess and the competition by pivoting the company in 2021. He is now white labeling the Deliver My Ride platform to banks in a move he says will “turn the car industry upside down.” The value proposition is simple: banks can now provide an online auto marketplace powered by Deliver My Ride’s platform that gives their customers a convenient, hassle free and transparent car shopping experience.

McInerney is currently in contract negotiations with two major banks to license the platform. “The beauty of this approach is that most banks offer online banking, so they have established web traffic. They have customer information they can access for leasing and financing, simplifying that process. They know who has auto loans and can market to those customers. And they have something priceless: the trust of their customers.”

He adds, “Now, banks can provide their customers with a new car buying experience where everything is done in one place instead of having to bounce around to 20 auto websites that only want to capture your lead and sell it to dozens of dealers.”

McInerney says his two biggest challenges have been the change averse mentality of the automotive industry and startup funding. “I’m attacking an industry that has been slow to innovate. Tesla proved it can be done. I know the automotive industry and how to innovate. I also know the current dealership structure won’t last. But you need money to go faster, build your company and your brand. That’s been my challenge.”

His biggest win has been making his dad proud of him. “I left the car business, came back, and showed dad I could make this thing happen.”

McInerney’s advice to others who want to start a company is back up your good idea with great passion. “Fancy PowerPoints and spreadsheets don’t do it. People see passion and believe in you. If they don’t see it in your eyes, they won’t invest.”