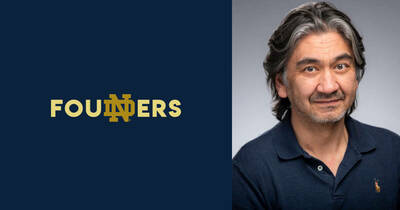 Thomas Totten took and passed nearly 20 different exams on his quest to become a Fellow in the Society of Actuaries. Only one test stood in his way. After 400 hours of study, he thought his goal was in his grasp.

“It was ruthless. I was working full-time, I had a family, I was studying, and I flunked,” he recounts. “So I bagged. Fifteen years later I came back. By that time, I was the CEO of an actuarial consulting firm with nine locations, thousands of clients, and more than 100 employees, client assets of in excess of $20 billion, and an actuarial science software company I founded.

Some of the credit for this postponed success story goes back to Totten’s years as an undergraduate student at the University of Notre Dame. “I learned a very important lesson in college,” he says. “If you are put into an environment where everyone is as good or better than you, it does good things for you. At Notre Dame, the challenge level is so high, you have to become better. That’s become a theme in my life.”

Totten is no stranger to reaching up for more. He was born in South Korea while his father, who was in the U.S. military, was stationed there. His mother was South Korean. Eventually, the family moved back home to Michigan City, Indiana, where his father was a steel worker. Totten would be the first in his family to go to college.

“My dad grew up in South Bend and he had a predisposition to Notre Dame. And Notre Dame was the one school the nuns told us about growing up,” he says with a smile. “My dad wanted me to be an engineer, so I pursued engineering.”

Unlike today when students apply to 30 or more schools. Totten applied to three: Purdue University, Rose-Hulman Institute of Technology and Notre Dame. He also applied for and was awarded a full-ride ROTC scholarship. “I got admitted early to Rose-Hulman and thought I was going there, but in April I learned I’d been accepted to Notre Dame. Even though I’d never visited campus despite living a half-hour away, I decided on Notre Dame.”

During his senior year, he met with his faculty advisor, Dr. John Derwent, who asked what he was going to do with his math degree. Seeing his student stumped, Dr. Derwent suggested he look into actuarial science. “He told me that many vice presidents in industry were actuaries. I thought that sounded interesting, so I signed up for the actuarial science entrance exam.”

Unknown to Totten had just signed up for one of the most arduous professional tracks in the world, requiring passage of 10 exams to reach an FSA: Fellow of the Society of Actuaries. This was in addition to the entrance exam, which had a pass rate of just 35 percent.

Totten aced that first exam, setting in motion an ever-expanding journey as an actuary and later as an entrepreneur. “I am eternally grateful to Dr. Derwent and to Notre Dame,” he says.

After earned a Master’s in Actuarial Science at Ball State University—the perfect place for theoretical mathematicians— Totten was offered and accepted a position with Hewitt Associates, a Chicago-based global consulting and outsourcing firm. Hewitt was unique in that it was egalitarian in how it operated.

“It was really hard to get hired at Hewitt. Everyone there was a SWAN: smart, worked hard, ambitious and nice. Everyone was there to succeed. Despite the long hours, the washout rate was nil. We thought we were the best actuaries in the country,” Totten explains. “What made had a life-long impact on me was the fact that no one had titles at Hewitt, not even the CEO. Everyone had the same size office, and no door was closed to you. Finally, clients were first, the employees came next. You worked for clients, not shareholders.

“My time at Hewitt set my belief: Be as equal as you can in business,” he adds.

In 1998, Totten joined Nyhart, a family-owned actuarial consulting firm—which became employee owned—in Indianapolis, where he served as CEO for nearly 12 years. Under his leadership, he put into practice the no title-open door practices of Hewitt and Nyhart flourished, eventually converting to employee ownership. Totten also flourished, passing his final actuary exam and founding Votaire, an actuarial science software company jointly owned by Nyhart.

In December 2019, just months before the global pandemic brought business to a halt, Nyhart and Votaire were acquired by Ascensus, a Pennsylvania-based retirement, education, and healthcare technology company. Totten calls the exit of Votaire the biggest win of his career for two reasons.

“Because Nyhart was employee-owned, we created 24 millionaires when we exited. We had secretaries who walked away as multi-millionaires. That was a function of how long people had been with the company. Employee ownership is risky, but it builds devotion and in the case of Nyhart, it created wealth and is a good lesson for business,” he says.

The other win was the success realized with Votaire. “We’d created an actuarial-based software for the insurance industry. I was shocked when I signed one of the largest health insurance companies in the United States to use our platform. That opened up the entire market.”

After the exit, Totten could have retired and pursued a personal passion, cycling. For 25 years, he’d enjoyed both mountain biking and competitive road cycling. Instead, he returned to Notre Dame to teach actuarial science. “It was a great experience,” he says. “The kids were smarter than me, but I was older, wiser and cagey.”

Totten soon realized needed to get back into the startup game. In 2020, he founded EpeeNoire, an HR tech consulting firm that helps socially responsible companies identify and partner with vendors in the employee benefits space. He explains some major companies like Patagonia and Mutual of Omaha already operate this way. Many others, largely nonprofits and employee-owned companies, would like greater value alignment with vendors. He has found that life in the consulting lane is a slow grind.

“We are generating income and having two of my children work with me has been fun. However, consulting is a contact sport. Generating clients is a numbers game; it takes time,” he explains.

Maybe the numbers game of startups—it's estimated just one in ten succeeds—was on his mind when Totten came up with a new company. Or maybe it’s just because, in his words, he “likes to be where others ain’t.”

“It is so much simpler when you’re creating a new market and have a unique story to tell,” he says. “The front edge is easier. The back edge, where you’re in an established market, the fighting is harder.”

The premise of Totten’s “NewCo” is that people who have never hired an actuary will need actuarial services. His new offering combines software with actuarial consulting to help corporate boards of directors make better financial decisions.

“Actuaries are the best at combining mathematics of probability and the value of time and money. Using robust methodologies, we support decision-making with quantitative rather than qualitative data.”

Totten continues, “Here’s another scenario. A farmer is wondering whether to plant corn or soybeans. We use actuarial science to guide decision-making on the best crop to plant in a given year. The magic of the software how it supports decision-making.”

Totten has positioned NewCo, which is currently operating as a division of EpeeNoire, as a software as a service with a consulting aspect. The ideal customer is a capital-intensive business that wants to avoid costly missteps.

“We launched the company with one client in manufacturing. The challenge now is, can I get 100 clients, 1000 clients? Having a great idea for a company is never hard. It’s the distribution model that’s always a startup’s pain point,” he says.

How does one solve the customer acquisition problem? Totten says, It’s always easier with word of mouth. A warm referral is powerful in terms of opening doors. I experienced that with Votaire.”

Totten is working with venture capital and private equity firms, but thus far has not taken any funding. “We are solving a big problem for companies simply with software. Now we need the right partner. “

When asked what advice he has for others who want to start companies, Totten cites Hollywood author and filmmaker Quentin Tarantino’s experience with Inglourious Basterds. “He wrote the script in 1998 then set it aside for nine years. Problem was, he fell in love with his words, and it wasn’t working. In 2007, he rewrote the screenplay, and it was a blockbuster. Don’t fall in love with your words—or your idea. Ain’t no one going to care except you. It ain’t a market until someone writes a check. You have to solve a problem. Learn from what people want.”