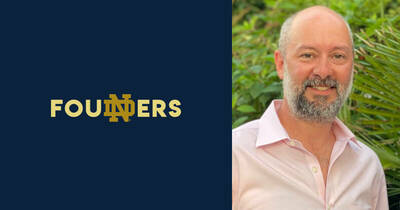 Growing up in Goshen, Indiana, Patrick Johnson’s idea of adventure was traveling to South Bend for weekend football games at the University of Notre Dame. Totally understandable. As he grew older, so did his wanderlust, leading him to exotic places around the world.

Perhaps his most intriguing destination is Kabul, the capital of Afghanistan. In 2015 Johnson and his three adventurous co-founders started Ziba Foods with the idea of restoring the country’s reputation for growing the world’s highest-quality dried fruit and nuts. More than that, they sought to provide economic empowerment to Afghan farmers and its workers, particularly women.

It was, admits Johnson, risky to start a company in a remote, war-torn nation with an uncertain future. But after a rewarding, near decade-long corporate career with Cummins, he was ready to carve a path of his own. The source of Johnson’s risk tolerance? He points to his student years at Notre Dame and the Peace Corps.

“Notre Dame instilled in me the value of volunteer service and my Philosophy degree taught me how to think. After graduation, I joined the Peace Corps in Niger. The Peace Corps honed my independence, and through intense mental and physical challenges, it changed my perspective on opportunity and the tricky relationship between wealth and happiness,” Johnson says.

He also met a like-minded soul during his time in the Peace Corps: his future wife, Emily. “The Peace Corps saddled us both with a need to keep exploring. It gave us the confidence to go for it when an opportunity came up,” he says.

In May 2005, Johnson graduated from George Washington University with an MBA in International Business and a Master’s in International Affairs. During graduation weekend, he married Emily, who was an attorney. “We decided to move overseas after graduation. Emily’s job offer in London was the best option. I was offered a great role with Cummins working on their distribution capabilities in Europe, the Middle East and Africa.”

Within a few of years, the corporate nomads moved to Dubai, then to Indianapolis, Morocco, back to Dubai, Singapore, and finally to Italy where they now live. By 2014, Johnson had a new move in mind. While on a business trip to Afghanistan, he was introduced to Raffi Vartanian and Kabir Arghandiwal, who are now his co-founders and best friends. “Raffi and Kabir understood my need to break out of the corporate bubble and convinced me to leave Cummins and start EDGE Capital Partners. Knowing I was significantly amping up the risk factor, I took their advice,” he explains.

The plan for EDGE was to invest in opportunities in pre-frontier markets, focusing on basic human needs such as food production, power generation, supply chain, and logistics. In 2015, EDGE made its first investment, founding Ziba Foods.

To understand why Johnson would start a food company in Afghanistan requires a bit of perspective. Prior to the Soviet Union’s invasion in December 1979, Afghanistan was known as the source of the world’s highest-quality dried fruit and nuts. The Soviet Union’s decade-long occupation disrupted local farmers. Since that time, there had been no viable path to market for agriculture products except for bulk trade to neighboring countries, primarily India.

Bulk trade was not favorable for Afghanistan’s small farmers. Typically, farmers gave their crops to traders on consignment. The traders sold the goods, returning months later to pay the farmers a fraction of what had been agreed, blaming product quality or market conditions. Farmers had no recourse but to accept. Making matters worse, traders often would blend unsold product from the prior season with newly harvested products, bringing down quality and undermining the reputations of Afghan products.

Johnson and his co-founders recognized the opportunity to ignite sorely needed economic and social change while preserving the country’s heirloom and wild-grown fruits and nuts. “Our primary motivation was to bring natural products to global markets and show that when dried fruit and nuts are grown the way they are meant to grow, they don’t need anything added to be world-class,” he explains.

In the world of corporate-driven, mass-produced agricultural products where customers and farmers are separated by layers of middlemen, Ziba Foods’ approach was groundbreaking. “These days, the best place to find truly natural, top-quality products passed down from generation to generation is in frontier markets like Afghanistan. Commercial agriculture has never penetrated these markets as the associated risks are beyond their tolerance. Frontier markets don’t have access to water subsidies and chemical fertilizers, so their farming practices and crops are true to form,” he adds.

The first thing Johnson and his co-founders did was purpose-build a modern factory in Kabul despite having no customers. This was necessary to support exports to international markets, be close to farmers and create jobs for Afghans. It also helped mitigate risk. “In frontier markets, you can do this while maintaining a very low cost of production. The only reason why it isn’t commonly done is because operating in frontier markets is hard, seen as too risky, and requires significant up-front capital expenditure before you have a retail product, much less customers.”

By 2016, the facility had earned HACCP-certification for food safety management systems and was staffed by a dedicated team of Afghans, 85 percent of whom were female. All processing is done in Kabul: hand sorting, manual quality inspections, and packing shelf- and ship-ready products.

Johnson admits it would have been simpler to follow the established model of buying all of its products in bulk, processing elsewhere and paying farmers later. “Creating jobs for Afghan women and supporting farmers and small traders by paying in advance is doing business the right way. The underlying social mission of the company is not a marketing gimmick. It’s the way we believe things should be done.”

It’s important to note that the factory, team, and supply chain were built during the deterioration of the post-Taliban elected government and years before the withdrawal of the U.S. military and Taliban takeover in August 2021. Johnson credits the company’s successful start to his Afghan co-founder, Kabir Arghandiwal, who found a reliable construction company to build the factory; Afghan general manager Jaweed, who believes in the company’s mission as much as it founders; and the Afghan staff.

While creating Ziba Foods’ physical infrastructure, Johnson and his team also had to establish relationships with hundreds of farmers, informal farming cooperatives, and local traders to secure the best quality products. Their value proposition to growers and traders was unique. Ziba Foods pays farmers and other suppliers when they deliver their product to Ziba Foods. Says Johnson, “We are the only company doing direct farm-to-retail dried fruit and nuts in Afghanistan and paying up-front. Our suppliers know that they can trust us.”

Ziba Foods’ co-founders self-funded the company for the first five years. In 2021, the decision was made to seek outside investors. Although fundraising is the universal challenge for startups, the task for Ziba Foods was more daunting. “Growing a business based in Afghanistan requires long-term thinking,” Johnson explains. “We needed investor partners who understood the consumer-packaged goods industry and the uniqueness of operating in a frontier market. It’s not a combination you find every day.”

Undeterred, they persisted, issuing a series of convertible notes and conducting a WeFunder campaign to allow non-accredited investors to purchase equity in the company. In 2022, Ziba Foods secured funding from an investor that will enable to company to drive toward breakeven over the next 18 months.

In early 2019, Ziba Foods made its retail debut online and in stores. The company sells direct to consumers via its website and on Amazon. Their strongest channels are brick and mortar retailers supplied by two of the largest natural food distributors in the United States, KeHE and UNFI. The company also has distributors catering to specialty retailers and  the fine dining and restaurant markets.

Up until now, Johnson says they have concentrated on getting product into brick-and-mortar retailers in affluent markets along the East and West Coasts. “Consumer response has been strong. We know that to create sustainable growth we need to focus on the consumer, and not see things through distributors’ perspective. The consumer is ultimately what drives growth, not the middlemen who help get the product onto shelves.”

To this end, Ziba Foods has created a visually lush and content-rich website supported by Instagram and digital marketing. Their website features beautiful photography of its dried fruits and nuts as well as its mission, detailed explanations of who and how their products are grown, and recipes. To encourage repeat customers, site visitors are invited to sign up for special discounts such as an immediate 15 percent off their first order.

Says Johnson, “As we scale, we plan to continue growing our direct-to-consumer online channels as well as through strategic distribution channels.”

The true risk of operating a business in Afghanistan reared its ugly head in July 2021 when the United States withdrew its troops and diplomats, sparking a Taliban takeover of Afghanistan’s government. As Afghans struggled to flee the country, Johnson and his co-founders struggled to remain operational, keep employees safe, and preserve lucrative purchase orders. Getting product out of the country was a major challenge as the airport was shut down.

“Internally, we claimed to be experts in supply chain and distribution. Suddenly, we had to reinvent our supply chain out of Afghanistan. Raffi and I were constantly on the phone and WhatsApp with Jaweed getting real-time updates on the situation.

Our first decision was to shut down the factory and tell all employees to remain in their homes as the Taliban entered Kabul,” Johnson recounts.

“As things settled down, it became clear there would be no battle for Kabul. Following Jaweed’s advice, we remained closed a few days for a holiday. When we started back up, all of our team returned. Since then, the factory is operating normally.”

Afghanistan under Taliban rule has brought unexpected challenges. Ziba Foods is working to secure organic certification. Because of ongoing political instability and perceived security risks, none of the certifying bodies will travel to Afghanistan to assess and certify the company’s products. Johnson finds the situation ironic. “We are too remote and too organic to be certified!”

Johnson says his biggest wins with Ziba Foods to date are two-fold. “Professionally, it’s developing the ability to switch gears and manage in the gray. As with any startup, it’s critical to know a little about a lot. I wear many different hats every day: marketing, financial modeling, new product introductions, sales strategy, retailer pitches, and fundraising—often all at the same time. It’s challenging, sometimes frustrating, but ultimately fulfilling.”

The second big win is starting a business with his best friends as co-founders. “I’m grateful every day for the ability to face and overcome challenges as a team. We all know exactly what the other bring to the table. We are able to build on that as we grow.”

Asked what advice he had for future entrepreneurs and Johnson offered this: “You will almost certainly face multiple existential crises along the way. During those times, it’s critical to have someone on your team who is a realist and someone who is an idealist. Balance is critical to staying focused and pushing through the storm. Without it, the idealist will go ‘head in the sand’ mode until it’s too late, while the realist will give up too soon. Failure is not fatal. Accept it with humility, learn as much as you can from it and then get back to work.”