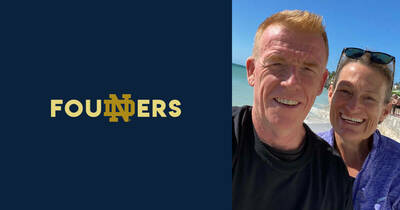 Eight years ago, Kevin O’Shea decided to start a charity bike ride to help the hungry and thirsty. The ride would not be easy. Participants would have to tough out two long days on the road, pedaling 209 miles across the State of Virginia, and meet some minimum fundraising requirements. To inspire riders or perhaps to amuse himself, O’Shea dubbed the event “The Journey of Awesomeness.”

His motivation was simple. “The ride is part of God’s economy. The more you give, the more you get back. And that return is not in dollars or accolades, but in the only currency that counts in my mind, relationships.”

As with any startup, the first Journey in 2015 began with a big idea. Fifteen cyclists participated, raising just over $35,000 for Charlottesville Abundant Life Ministries. Today, the Journey rides for WorldServe International, a provider of sustainable wells and clean water in East Africa, and the Blue Ridge Area Food Bank. This June, the ride expanded to 50 cyclists and raised more than $280,000. All told, the event has generated over $1.2 million in donations, resulting in an abundance of clean water and communities impacted in East Africa, and an equal abundance of food and meals for the hungry in central Virginia.

The annual event is now officially awesome. But it’s not O’Shea’s only Journey of Awesomeness. His entire life has been one of twists and turns, risk and redemption, wins and heartache, and all of it—well, the adult part—held together by the love of a supportive spouse.

O’Shea’s first supporters were his immigrant parents, Maurice and Alice, who came to Springfield, Massachusetts from Ireland. They made it clear to young Kevin that it would make them extremely proud if he were to attend the University of Notre Dame. Dutiful child that he was, O’Shea made South Bend his holy grail. There was just one thing holding him back.

“I was not a high achiever as a youngster,” O’Shea admits.

Fortunately, O’Shea had an aptitude for math and science that would help him get into Notre Dame through a back door. In the 1980s, Notre Dame’s Engineering Department had a “three-two” program with several small Catholic colleges. Students could do their first three years at these colleges and if they made the grades, they could transfer to Notre Dame for their final two years in the engineering program.

Seizing the opportunity, O’Shea declared aeronautical engineering as his major and attended Stonehill College in North Easton, Massachusetts. “I didn’t have a particular passion for engineering but knew it would lead to a good career and to Notre Dame.”

He transferred into Notre Dame when he was 21. “I was well prepared in some ways. I was a little older and more mature. I thought I was ready for the rigors.”

Looking back, O’Shea says he may have overestimated his readiness. “Notre Dame was an entirely different league academically than Stonehill and the students were much smarter and more competitive.”

But that didn’t dampen his willingness to take on a challenge. Facing graduation, a friend told him that graduate students in engineering received full tuition and were paid a modest amount (beer money) and he matriculated to the University of Virginia’s Mechanical and Aerospace Engineering Department He admits his decision to pursue a masters was driven by whimsy. “It sounded like a great deal, so I took it,” he smiles.

Two years later, with his master’s degree in hand, O’Shea accepted a job as a mechanical engineer for IBM in Fishkill, New York. Little did he know it would be his first and last major corporate job before launching himself into a series of startups.

The first one came in 1992 when he was 28. A friend was applying to the Rasna Corporation, a venture capital-backed tech company with a mechanical design synthesis software. O’Shea was hired as an application engineer to serve as a technical resource in sales. He calls the experience life changing.

“I was surrounded by super talented people. Much of my time was spent on the road demonstrating software—a great way to learn and grow. I thought I would be there my entire career. When we were acquired by Parametric Technology Corporation in 19995, that was it, I was done at Rasna,” he says.

Although O’Shea lost a job he loved, the experience ignited a desire to continue building companies from the ground up. It didn’t take long for another opportunity to present itself. In 1999, a former classmate from the University of Virginia, Rita Schnipke, approached him about joining her company, Blue Ridge Numerics that she and Ed Williams founded in 1992. She and Ed needed some “sales muscle” and she asked O’Shea to join the effort.

“Blue Ridge was a very niche, very geeky software company,” O’Shea says. “They had developed a software called CFDesign for computational fluid dynamics (CFD) that would democratize this very complex discipline so that general-purpose engineers rather than specialists could easily analyze virtually any kind of gas flow, fluid flow or heat transfer. At the time, Blue Ridge had four employees and negligible revenue while I had a good, stable job and four kids.”

After debating the pros and cons with his wife Maureen, the couple agreed he should take the job. Part of the draw was moving back to Charlottesville, Virginia, where he’d attended graduate school. The other part was his belief in the product.

“Most of my career changes required a pay cut,” O’Shea says. “This was no different. The trade-off was a chance to get in on the ground floor and an opportunity to change the world in a small way.”

For the next 13 years, he slogged away at Blue Ridge bringing their software to market. When he first started, the Internet was still young, so O’Shea relied on cold calls. “That was a time when people still answered their phones,” he laughs.

He persisted and growth followed. O’Shea played a key role in building the Blue Ridge team from four to 100 people. The strategy was to hire people who were on fire for the company’s mission and product. “We hired people who believed what we believed, that CFD could be accessed by ‘mere mortals.’”

In 2011 and now vice president of global sales, O’Shea says the company was at a crossroads and in need of a change of direction. “We had reached a point where we didn’t know what was next. We were trying to figure out how to take the company to the next levels of growth, and we knew that it was not our core strength. That’s when AutoDesk stepped in and acquired us.”

O’Shea’s next move was to HelioSage Energy, a utility scale solar developer. Five years in, that company was acquired. With three exits behind him, O’Shea was ready to start his own company.

His opportunity came in 2016 when he was asked to help start a company called Lumin with Alex Bazhinov and Andre Znachonok. The idea was to re-imagine home electrical panels, which had not changed in 40 years, into smart technology that would advance adoption of renewable energy at the residential level and help reduce energy waste.

“Alex had built a small prototype, and my first thought was surely someone else had already thought of this. There are giant companies in the space: GE, Schneider Electric and ABB. Then I thought, maybe they stayed away from it because it was too hard. I consulted with Maureen and decided to go for it,” O’Shea says. “It was the ultimate roll of the dice. Me, two Russian guys, a cool idea, and no money.”

To celebrate the new venture, O’Shea took Maureen and three of the couple’s now six kids to a Christmas party hosted by his co-founders. Alex took the guests to the basement to see the panel. As they were demonstrating it, Alex and Andre began calling out to each other in Russian in front of the guests.

“After the party, I asked my 16-year-old daughter Anna what she thought. Her answer was classic: ‘Dad, I can’t believe you are risking my future on this fifth-grade science fair project.’” O’Shea pauses, overcome with laughter, before continuing. “Even she saw the challenges ahead with such an early-stage product.”

Undeterred, O’Shea embraced his new role. During the first two years with Lumin, he didn’t draw a salary. Instead, he bootstrapped the company while his two co-founders worked on the panel, the software behind it and securing UL certification. O’Shea helped raise a couple of seed rounds with Charlottesville angel investors to keep the company moving forward. By the fourth quarter of 2018, they had a patented, Cloud-based, UL-certified product to sell. Early success began in 2019.

The stress of bringing a basement-built prototype to a full-fledged commercial solution had taken its toll on the relationship between O’Shea and his co-founders. “I always felt we were underfunded and under-resourced for the job at hand. The product was complex, and I wanted to go even faster and bring on additional talent. Alex and I didn’t always see things the same way. There was a lot of tension,” O’Shea says. “Ultimately, the board of directors took action and requested I leave Lumin,” he says.

O’Shea went home and licked his wounds. He also cycled a lot, processing what happened as he covered many miles. After much rumination, he came to the realization that his true strength is getting companies off the ground and letting others scale them. Thus, his exit from Lumin was appropriate. While he now believes parting ways with his company was absolutely the right thing to do, the experience was very emotional.

“At the time, I didn’t agree that my leaving was the answer. Now, I know that it was, and I’m super thankful for the opportunity. Lumin continues to flourish, and no one is rooting harder for their success than me,” he says.

Today, O’Shea is happy to be back in the saddle with a new startup, SimScale. His biggest challenge is being patient and not getting too enslaved to outcomes, especially those he’s pre-hatched. “I’m learning to be in the present, to not  get too far in front and to focus on  the task at hand. That includes recognizing people don’t always have the same energy as I have and being supportive. Startups are never a linear journey. It’s always messy, and there’s inevitably a lot of ups and downs, laughs, tensions, and emotion.”

He adds, “Getting to know the love of God for my sorry butt continues to be an incredible liberator. My faith allows me to get into the world, make some things happen and not worry about outcomes.”

O’Shea’s considers his biggest win in business to be the vital, life-giving relationships he’s formed over the years. “Successful exits are great, but for me creating  opportunities for others and building teams galvanized by a shared mission is the real win.”

Asked what advice he’d give to others who want to start a company and O’Shea is quick with his answer: Marry well.

“Without Maureen and her support of my adventures and risk taking, I wouldn’t be here today,” he says. “She has been incredibly supportive, patient and challenging. She’s asked a few hundred questions I never had the answers to, and there have been lots of difficult conversations. If your home team is not aligned and supportive, it inevitably becomes a major headwind in the entrepreneurial journey.  At the end of the day, she has trusted and supported me, and it has made all the difference.”