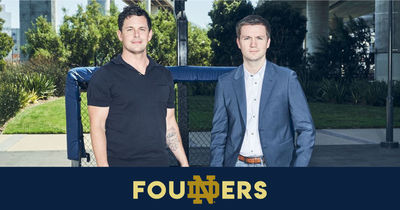 From left to right, Alex Mather and Adam Hansmann (Finance, class of 2010) founded The Athletic together in 2016

The Athletic covers sports. Although most sporting events across the globe have been suspended due to the COVID-19 pandemic, there is no doubt they will return. When they do, The Athletic will be there to cover them.

As a kid, Adam Hansmann recalls fierce daily competitions with his father over who got the sports section of the newspaper first.

Hansmann smiles at the memory. “I was and still am a voracious consumer of news and a massive fan of the Cincinnati Reds and the Bengals. I had this deep love of the stories behind my teams and read everything I could find. Though I wasn’t a talented writer, I eventually became the editor of my high school newspaper.”

Little did he know that this passion for well-told sports stories would set the stage for a far bigger role: co-founder and CEO of what is now North America’s most popular sports news platform, The Athletic.

First, however, came college. The University of Notre Dame was Hansmann’s dream school. Surprisingly, it wasn’t Fighting Irish athletics that attracted him; the Mendoza School of Business was the draw. While other students point to national championships or trips to bowl games among their favorite collegiate moments, Hansmann’s enduring memories are of bonding with fellow finance majors in Mendoza's Applied Investment Management (AIM) program, where he learned the finer points of investing, and starting a company called Dorm Drinks with friends.

“Remember, this was before food delivery apps,” Hansmann says. “We’d go to Sam’s Club, buy bottled water and soda, mark them up, then sell and deliver them to students’ dorm rooms. We had a lot of fun applying what we learned in class and made a little money. We did have one scare—Resident Life called us in at one point because they thought we were delivering alcohol.” (They weren’t.)

After graduation in 2010, Hansmann joined McKinsey & Company in New York. After two years, he moved to San Francisco where he worked for Calera Capital and then Strava, where he met Alex Mather, the other founder of The Athletic. Sports journalism was never far from his heart. Traditional newspapers were in steep decline, taking sports pages with them. The common industry view was web content needed to be free. Hansmann and Mather began discussing the idea of a subscription-based, ad-free sports website and app.

“We believed that die-hard fans would be willing to pay for good reporting, writing and insight they couldn’t get anywhere else. In January 2016, Alex and I launched The Athletic in Chicago, believing we could reinvigorate sports journalism with top national and local writers and a subscription model,” he says.

Neither Hansmann nor Mather had ties to Chicago; they chose the Windy City for its legendary sports teams—the Bulls, Bears, Cubs, White Sox and Black Hawks—and recruited talented journalists from ESPN to join their team. This was a huge win for their business model as The Athletic’s journalists are exclusive to the platform, with the exception of broadcast sports.

Roughly nine months after the Chicago launch, The Athletic expanded to Toronto, followed by Cleveland, Detroit and Minneapolis. The market-by-market approach allowed Hansmann and Mather to perfect their format and pitch for investment dollars, a process he describes as “humbling.”

“For two years, we lived and breathed fundraising. Investors were skeptical; a subscription based sports news platform was not an obvious model. The first million was the hardest to raise,” Hansmann says.

Since then, venture firms have come onboard, investing $150 million in The Athletic. The platform now has subscribers across the United States, Canada and the United Kingdom. The Athletic’s newsroom, though distributed across two continents, is the largest in the world, boasting more than 500 employees and some of the top names in sports journalism.

Hansmann points to some major validating moments. “When Ken Rosenthal, who is arguably the best broadcaster in baseball, joined us in August 2017 as a senior baseball writer, that was huge. When we went to London last year to open an office and were able to convince the best sports journalists from the BBC and Times of London to join us, that was also huge.”

During the four years of The Athletic’s history, Hansmann has learned much about subscribers’ preferences. While the Super Bowl is big, what really excites fans are the NFL and NBA drafts and coaching changes. His favorite sporting events are the Major League Baseball’s playoffs and the World Series, although with the addition of the United Kingdom, World Cup soccer will likely become a favorite.

Reflecting on his rise to the top of sports journalism through The Athletic, Hansmann says the decision to start a company must come from the heart, not from chasing a shiny object.

“There’s joy in creating something that didn’t exist before. Being an entrepreneur involves incredible highs and lows. Ask yourself, ‘Do I want to subject myself to this?’ There are far easier ways to make money, have a good lifestyle and have time for friends than starting a company.”