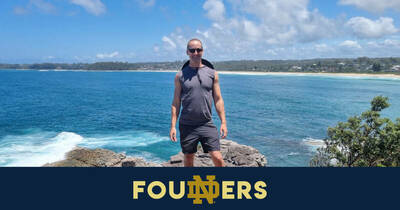 Dillon Bailey came by his University of Notre Dame roots honestly. Two uncles, both priests, attended Notre Dame. His father, an ironworker and union man, had been involved in the construction of a number of the university’s newer buildings. When it came time for Bailey to choose a college, his grandfather encouraged him to follow in his family’s footsteps. Having grown up a stone’s throw from South Bend in Buchanan, Michigan, Bailey didn’t need much convincing. In 2011, he joined the ranks of the Fighting Irish.

His first year was not what he expected.

“I’d gone to public schools growing up and had never been challenged. Notre Dame was a shock academically; it was so hard,” Bailey says. “I was always incredible at math. Then came calculus. I could not wrap my head around it and that threw me for a spin. It was humbling.”

With the help of a tutor, he made it through calculus. The experience taught him two important life lessons: persistence and resilience. “At Notre Dame, I had to fight for my grades, which gave me the ability to face challenges and keep going. I also figured out that finding yourself in an uncomfortable zone is a good thing. It forces you to adapt and grow.”

By junior year, Bailey had hit his stride and exercised his hard-won confidence by studying abroad in Fremantle, Australia. “As soon as I got off the plane, I felt at home and immersed myself in my new life with no trepidation.”

Bailey returned to Notre Dame for his senior year, a year that included a long-distance relationship with a girl back in Australia.

Within three weeks of returning to Australia, Bailey’s romance ended but he persisted. He got a job running events at a café and enjoyed life. He met another girl and moved to Melbourne. Then with three months left on his 12-month holiday visa, Bailey faced a tough decision: either find a work sponsor and remain in Australia or go home.

“I had an interview with Accenture in Chicago my senior year so I reached out to them to see if I could join their team. I was shocked—they sent me a contract immediately. I realized the nine months I’d just spent enjoying life hadn’t hurt my employment chances,” Bailey says.

With that kind of offer, most people would have signed the bottom line and joined the global IT consulting firm. Instead, Bailey jumped online, searched digital agencies and found a local company, Reactive. The owner took a chance on Bailey, hiring him as a frontend web developer and sponsoring his visa so he could remain in Australia.

“I was incredibly grateful,” Bailey says. “The irony was Reactive was acquired by Accenture, so I ended up working for Accenture.”

A couple years into his career, Bailey started a side business called BLK MRKT. He consulted with small clients on crowdfunding and campaign management with a focus on digital marketing initiatives. Along the way, he met a digital designer, Clint McIntyre, and began collaborating on projects. Their confidence and partnership reached a new level in 2016 when they left their full-time jobs to found a digital agency called Honest Fox.

Asked about the provenance of the name, Bailey gives credit to his co-founder Clint. “He came up with the name before there was a business. Foxes can be seen as sneaky or clever, but they’re also adaptable, which you have to be with technology. The word honest reflects integrity. Honesty is never a bad thing,” he says.

In the “old” days, marketing agencies focused on print and broadcast advertising. Now in the digital age, marketing firms are worlds away in their offerings. With the speed of change in the digital world, it can be difficult to define a firm’s offerings. Bailey explains that Honest Fox is making its mark in digital marketing by focusing on business planning and strategy.

“Where we started, Honest Fox was pure digital: we built websites. But because of the democratization of digital and all of the out-of-the-ox platforms, anyone can build a website. However, the resulting website may not be strategic or accomplish the stated objective. Is it working for the company? Probably not but many people don’t understand this. What we do is help people understand how to make digital work for them,” Bailey explains.

The lack of understanding of digital marketing strategies is the same for $100 million brands and $100,000 brands. Part of the problem is digital moves very fast. Bailey points to the Industrial Revolution, which began in 1760 and ran through 1840, and saw Europe, England and the United States slowing transition from hand-made good to modern manufacturing. By contrast, the digital revolution has taken place over years rather than decades, leaving most companies struggling to understand and leverage their options.

Bailey is circumspect about the matter. “There’s no right answer in digital marketing, just progress. Honest Fox exists to challenge people’s thinking in this complex ecosystem - digital. We help companies find what works for them.”

From the beginning, Bailey and McIntyre have bootstrapped Honest Fox. Sixty percent of the firm’s billings are invested in the company, largely on employee salaries. The aim is to be an ethical company in terms of creating jobs and paying their people what they are worth. We realized early on we weren’t going to get rich. We see it as our social responsibility to treat our team well. It’s hard to watch companies make record profits and cut staff in favor of shareholders. That’s not us,” Bailey says.

Over the last several years, Honest Fox has slowly grown into a full-service marketing firm that develops and implements strategies and offers a full array of digital solutions. This includes websites and apps, third party ad platforms, third party publishing, email marketing, and SMS text solutions. The company hires people with experience or talent that help expand service offerings. However, Bailey says the entire team is pushed to think as a consultant and partner to their clients.

“We try to hire the smartest people to fill roles at Honest Fox,” Bailey says. “It’s rewarding to see how the firm has come together and how we make things happen by handing responsibilities over to people who are better at it than we are.”

Honest Fox is currently in the middle of a major rebrand that will reflect the full-service nature of the business. When the brand goes live in later June, Honest Fox will be positioned as  a thought leader that will help businesses rethink their vision, how they invest in their digital presence, and ultimately, amplify their digital strategy and results.

With the path forward clearly defined, Bailey admits founding a company comes with challenges. For him, the biggest one is balancing his business, personal and family life. “You invest so much your business becomes part of you. But there are other important things pulling your attention. You need to keep things in check,” he says. “My Papa (grandfather) spoke about boxes. He could come home from work, switch off business and put it in a box. Learn to set work aside.”

Bailey says the biggest win from Honest Fox was unexpected and purely organic. “What’s brought the most satisfaction is seeing the culture we’ve built. We have people on the team from Sweden, Russia, Spain, Malaysia, America, and Australia who have come together in a big melting pot. Our people say this is the best place they’ve ever worked. There’s a ‘mate ship’ here, a sense of community where everyone is passionate about the business and willing to take risks.”

Bailey is quick to credit his grandfather, father and first boss in Australia for his success. “My grandfather was an entrepreneur and showed me how to run a company. My father was a union man and taught me the value of putting other people to work in good jobs. My first boss here gave me a chance and now my co-founder and I have given nearly 20 other people a chance. Employing people is a great service. It’s neat to know one good begets another.”

Asked what advice he would give to others with a desire to start a company, Bailey offered this: Follow your heart.

“You can follow the tried-and-true path or make your own. There is more opportunity out there than you realize, but you don’t have to fling yourself halfway around the world to learn that lesson. Once you start your career or a company, always make sure you’re having fun. Not every day is fun. Learn how to reset and go forward.”