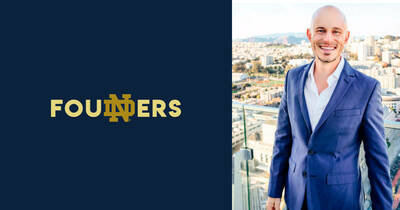 By any measure, DJ DiDonna had achieved the pinnacle of startup success. After years of pushing the proverbial rock, a game-changing fintech company, up the hill, he and his co-founder had exited to a much larger company and achieved financial success.

“We started the Entrepreneurial Finance Lab in 2007 as a research project at the Harvard Kennedy School. We created a platform that used non-traditional and alternative data to determine an individual’s creditworthiness in emerging markets. Lenders could take this information to support better lending,” DiDonna explains. “In January 2010, we spun out of Harvard as a private company.”

For the next eight years, DiDonna dedicated all of his time and energy to scaling the company. By December 2017, the Entrepreneurial Finance Lab’s technology had unlocked over $1 billion in capital to one million entrepreneurs and individuals. The company won the G-20 SME Finance Challenge, a global initiative to identify innovations in small business finance, and was featured in The New York Times. The Lab was acquired by Lenddo.

The exit was everything DiDonna had worked for, but it also created a new challenge: what next? Did he stay with Lenddo or look for a new job? In the end, he decided to do neither. Instead, he took a four-month sabbatical. In his mind, there was no other option.

“Work had always been my priority, but I was so burned out I couldn’t see myself continuing with a traditional career,” he says. “I needed to step back and find me.”

Without a formal plan, DiDonna first headed for New Zealand, where he officiated a wedding, bought a motorcycle and hiked. Next, he traveled to Tokushima, Japan, where he participated in an 800-mile pilgrimage on foot to 88 Buddhist temples. Dressed in a traditional robe, DiDonna carried a stick with a bell throughout the journey. The tinkling of the bell caught the attention of locals who gave him and the monks small gifts of oranges and coffee. Following local tradition, he gave them a small slip of paper with his name on it as thanks.

“There was this awesome interplay between us and those we met—a recognition of the difficult journey, gratitude and thankfulness. The experience melts you; you realize you have many things to be grateful for,” DiDonna explains. Returning home, he spent time with his family, including accompanying his mother and her college friend on a train trip across Canada.

By the end of the four months, DiDonna realized just how much his personal identity was intertwined with his old company. “I measured my life by how big the company was and how many people we helped. The sabbatical gave me the courage and creativity to be something else again. It opened the aperture on what was possible in my career.”

At first, the “what next” was not entirely clear. DiDonna thought about writing a book. He also began thinking about the need to shift common beliefs about life and work. “I had a series of questions. What is normal work? What is normal care? The traditional way of thinking is that you go to college and then work the rest of your life. Is that the only path or can we be more intentional about taking time for ourselves?” he explains.

Having just completed a sabbatical, a term usually reserved for academics taking a break from their typical classroom routine, DiDonna pondered the idea of a broader application of the practice and the companying benefits to other working people.

“Most people don’t consider taking extended time away from work. People worry about what others will think of them and what it will cost. If they do consider it, the term sabbatical helps us to treat it as important. You can’t just say, I’m taking six months off. It’s too controversial. Who does that?” he explains.

With ideas rolling around in his mind, DiDonna returned to his alma mater, the University of Notre Dame, in 2018 as interim managing director of the Wilson Sheehan Lab for Economic Opportunities. While at South Bend, he met Notre Dame Professor Matt Bloom and discovered a shared interest in research around meaning and flourishing at work. This led to a collaboration between them and the Templeton Foundation to research sabbaticals with the goal of understanding when and why sabbaticals lead to positive outcomes for those able to take them.

In 2019, DiDonna formally launched The Sabbatical Project to bring together researchers, companies, and advocates to catalyze greater acceptance and adoption of sabbaticals by companies and individuals. The practice is already accepted in other parts of the world. For example, in Australia, employees with more than 10 years of service are entitled to nearly nine weeks of paid long-service leave. For every five years of service after this, they are entitled to four-and-a-half weeks of paid leave.

The mission of the Sabbatical Project is to work toward a world where extended leave is the norm, not the exception. To get there, the Project creates evidence from research and shares stories about the transformative impact of sabbaticals on both individuals and companies. Sabbaticals are not vacations and are defined as a period of extended time intentionally spent on something other than one’s routine job. Ideally, a sabbatical should be spent in a different geography from one’s home.

“People need six to eight weeks to totally unplug. During this time, you ideally need to put a wall around yourself to actively disengage from work. This gives you time to work on yourself and your relationships. What people discover is you are not your job; your outlook on life is the real you,” DiDonna says.

Ultimately, the goal is for American companies to have formal sabbatical policies that enable people to leave, recharge and return to their jobs. Acknowledging changing perceptions about long breaks from work is an uphill climb, DiDonna is attacking the issue from both sides, individuals and employers.

The biggest challenge to date for The Sabbatical Project has been convincing people their professional life will not end if they take an extended period of time away from work. “There is this real fear of having a gap in one’s resume and how it will be interpreted that scares people. Timing is everything but what people need to realize is how short and precious life is. If you wait, will there still be an opportunity to make time for yourself?”

He points to one of the stories on his website as an example. “A couple took a month away from work to take a cross-country RV trip with their four kids. They finally learned who their kids are. We have to make space for time off or opportunities are lost.”

DiDonna concedes many people can’t afford to stop working to take a sabbatical. “I tell them to set a goal and start saving. Go when you can.”

DiDonna’s says his biggest wins with The Sabbatical Project are having the time and resources to tell his story and potentially effect change. “I’m committed to this idea of taking time from our adult lives to be ourselves and if needed, find ourselves. I’m also surprised by all of the attention from media outlets like The Wall Street Journal, Fast Company, Fortune, Forbes, and The Atlantic.”

People seem to be getting DiDonna’s message. During the COVID pandemic lockdowns, the reality of work and life came into sharp focus. Forced to mush together professional and family life while working from home, many realized what they’d been missing. “COVID gave people the opportunity to step back and view life and work in a new way. In the end, it was a bit of a gift,” he says.

Whether or not DiDonna’s Sabbatical Project becomes a national movement is yet to be seen, but appreciation for time off is growing. In mid-May, The Washington Post reported that Goldman Sachs just made it mandatory for employees to take at least 15 days off a year. The investment form’s partners and managing directors now get unlimited time off.

The news elicits a smile from DiDonna. ”There’s something magical about taking a couple of months off from work. No one size fits all and if you can’t afford it now, start saving and go when you can.”

Asked what advice he would give to others who dream of starting a company or a movement like The Sabbatical Project and DiDonna sent a pointed message to fellow Notre Dame graduates:  A Notre Dame education affords a variety of career options and a life for yourself. Don’t stress about career changes.

Says DiDonna, “We come to this school to become a doctor, lawyer, banker, and other high-powered, all-consuming careers. We have the ability and the responsibility to take a break, but few do. Understand the privilege of your education and the tailwinds behind you. Don’t fall into the path of decades of uninterrupted work. If taking four months off sounds too long, take one month. Treat it as a gateway drug. Save up, make a sabbatical a priority.”

He adds, “if you’re an entrepreneur, design your company to be able to take off. If we can’t effect change for ourselves, who can?”