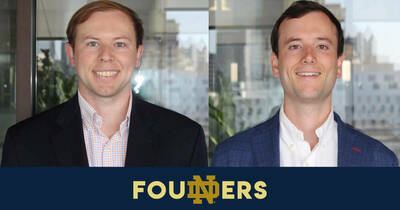 Finding one’s path in life can be a lifelong struggle, but Jack Markwalter found his during the first week at the University of Notre Dame. His freshman tour guide was a fellow named Peter Woo who not only showed Jack around campus but also inspired a future startup.

“Peter was the founder of the Jubilee Initiative for Financial Inclusion—JIFFI—a nonprofit that made small loans to people in the South Bend community for unexpected car repairs, broken water heaters in the winter, or sometimes for Christmas gifts. JIFFI’s customers were typically people who didn’t have access to bank loans due to poor credit or  financial mistakes made in the past. JIFFI’s loans are a great alternative to payday loans, which have crazy interest rates. There was also a financial literacy component, and the group would help people create budgets to ensure that a loan was right for their financial situation,” explains Jack.

“As a Finance major who wanted to give back, it sounded interesting, so I joined,” he adds.

At the time, JIFFI had just a handful of student members, most of them seniors. To fund its loans, JIFFI relied on Notre Dame alumni for donations along with an annual Indiegogo crowdfunding event. As an all-volunteer organization, there was little financial overhead. During his sophomore year, Jack became CEO, a position he held through his senior year, during which time membership grew to 40 volunteers.

The experience had a profound effect on Jack. “I developed a deep understanding and appreciation for the problems everyday people face. I also saw the difference we could make in people’s lives by providing access to affordable credit. As a business model, I thought this type of lending could succeed if you could offer the product in a scalable way.”

Help was on the way in the form of his younger brother Hodges, who was also a Notre Dame Finance major. Instead of JIFFI, Hodges got involved with Unleashed, an impact investing club that blends entrepreneurship with social change. The club ignited his interest in entrepreneurship.

“Tommy Flaim (founder of apparel startup Fox & Robin) was the president. He made it fun, which inspired me to learn more. I took a social entrepreneurship class that studied mission-driven companies and learned about triple bottom line as a viable business model,” he explains. “I always had an entrepreneurial spirit during undergrad, but this experience shaped my perspective and pushed my desire to start a mission-drive business.”

Upon graduation, both Markwalters took traditional finance career paths, Jack joining Third Lake Capital in Tampa and Hodges going with SunTrust Robinson Humphrey in Atlanta. They continued bouncing startup ideas around and in December 2018 hit on an idea to pursue.

“Jack had great experience in consumer finance through JIFFI, and we identified an unmet need in the personal loan market. We also saw innovations in payroll that would enable us to combine lending with payroll,” Hodges says. “We started working nights and weekends on our idea while still in our day jobs. We incorporated VIVA Finance in April 2019 and went full-time in May.”

The unmet need was the one Jack had addressed in South Bend with JIFFI. There is a significant portion of Americans, typically low to medium income, who don’t have access to traditional loans because they have no way to build a credit score or who have bad credit. Some are “unbanked,” meaning they don’t have checking or savings accounts. Paychecks are cashed, sometimes put on prepaid credit cards. Unexpected expenses such as car repairs, doctor bill, or broken appliances can wreak financial havoc.

“When people are desperate for money, they are willing to pay anything for access to credit,” Jack says. “And that leads those without credit to payday lenders.”

Therein lies the problem—and an opportunity. Payday loans are short-term loans with triple-digit annual percentage rates. Payments are typically due within two weeks, and if not paid, the amount owed starts to climb, fast.

“The idea behind VIVA Finance is to give people a mobile first, loan alternative with interest rates ranging from 12 to 27 percent. The interest rate wasn’t the only difference. First, our approach involves underwriting the loan based primarily on a person’s employment, rather than a credit rating. Second, loan repayment would take place through payroll. Finally, we include a financial literacy component that helps people budget and built credit,” Jack says.

The brothers initially set up shop in their parents’ attic in Atlanta and used their savings as operating capital. Neither originally knew how to code but quickly sought to build their underwriting platform. They supplemented their efforts with freelance programmers. Fortunately for them, Atlanta is a hotbed for fintech, finding contract talent was easy. Three months in, the Markwalters landed a spot in Georgia Tech’s ATDC program, a state-funded tech business incubator that gave them access to mentors, talent and advice. At this point, the company was funded by a $1.1 million pre-seed round from family, friends, and investors in financial services who knew the space.

Entrepreneurs are no strangers to challenges, uncertainties and gut checks. For Hodges, the early days of the company were tough. “Working in our parents’ house, with no revenue, was nothing to brag about. Moving to the incubator helped, but there was no reassurance our ambitions would come to fruition,” says Hodges. “It wasn’t until we had our first pilot customer, Clayton County Public Schools, that we turned the corner in our business and in our minds. It wasn’t long before teachers, bus drivers, and other school employees from across Atlanta were reaching out to us for loans.”

From Jack’s perspective, the biggest challenge was launching a product from scratch. “Once we had a platform, policies, and structure in place, it was significantly easier to build on that and make iterative progress.”

Also difficult was identifying the right channels for growth and marketing. In the early days, the Markwalters were lean and resourceful, heavily reliant on grassroots tactics. It wasn’t unusual to find the brothers outside of Grady Hospital in Atlanta during 5:00 a.m. shift changes, passing out fliers and donuts as employees came and went. They did the same thing to win customers at school districts, sometimes to the extreme.

“We had to be boots on the ground scrappy,” says Hodges. “At one point we made a trip to Houston to drum up business with the Houston Independent School District. Over three days, three Viva employees hit 135 schools to hand out fliers and donuts.

The goal was to gain trust, build awareness and  generate viral word-of-mouth. The high touch approach was essential to creating immediate traction.” Since then, VIVA Finance has grown its digital outreach via paid search and social media ads and is realizing efficiencies of scale.

Digitally driven customer acquisition is definitely more scalable, but so are other business processes. During the pandemic, the Markwalters postponed a planned seed round raise from April 2020 until the fall. The brothers hunkered down to preserve capital and spent their time making their consumer-facing and backend processes easier. Automation and a mobile-first approach have been keys to optimizing the customer experience.

Explains Jack, “We found that 70 percent of our loan applications were done on smart phones. So optimizing our platform for mobile was critical. Today, people can complete their loan application online in less than five minutes. That’s huge especially when considering alternative of taking time to physically go to a store-front lender in person and the stress associated with that.”

Given VIVA Finance was founded less than three years ago, the Markwalters have made incredible progress scaling the company and creating more access among those systemically underserved by traditional lending mechanisms. After initially bootstrapping the company with personal savings and a pre-seed round, they have raised an additional $8.5 million in a seed round in September 2020 and Series A in August 2021. Leveraging the investments, VIVA Finance has made more than $35 million in direct-to-consumer unsecured loans. The company, now licensed in 18 states, has more than 10,000 active customers. They have racked up over 600 five-star Google reviews.

The impact VIVA Finance is having is real, says Jack. “In the early days when we personally knew many of our customers, we would have some customers call in to us in tears at the prospect of being able to pay off their payday loans with our low-interest VIVA loans. As we continue to scale the company, our impact continues to grow as well.”

The brothers agree that the biggest win to date has been building out the VIVA team, which now includes 22 employees, all of whom are in Atlanta. Says Hodges, “Creating our culture has been a priority, and it shows. Our people are having fun making a difference in people’s lives.”

The other win is finding a solid rhythm as founder C-suite brothers. Says Jack, “Growing up we had our arguments, but we work well together and rely on each other. The key is understanding each other’s strengths and weaknesses and being clear about our roles. Hodges focuses on growth and the gritty side of operations, while I am more on the tech, analytics, and funding side of the business. Where we come together is strategy.”

That strategy includes thinking big. “Our ultimate goal is to be the go-to financial services provider of the overlooked consumer, adding additional products to serve our customers at every step of their financial journey.”

Asked what advice they would give to other new college graduates considering the entrepreneur route, Hodges offs this: My greatest advice for young entrepreneurs is to take the first step. There were so many times in my past when I had great ideas but did not have the confidence to pursue the concept beyond ideation. Oftentimes, the only thing that stood between turning a creative idea into a viable business model was my fear of failure and hesitancy to pursue it. Every idea has its challenges and doubts—as did VIVA for Jack and me. Do not allow these challenges to stop you. I would advise young entrepreneurs to overcome the fear of failure and to accomplish the most challenging feat, that first step.”

Don’t let youth hinder you, says Jack. “As you get older, there are so many responsibilities in life that can hold you back from taking a big risk. If you want to start a company, do it when you’re young. Take the leap and get going.”