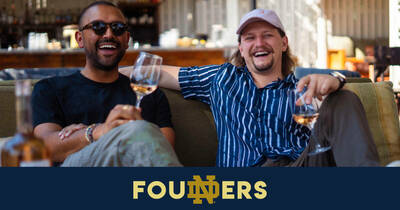 There was nothing more magical to 13-year-old Jesse Bongiovi than walking through the tunnel and onto the field of the University of Notre Dame’s football stadium with his dad on Senior Day. And when his dad said, “Wouldn’t it be amazing if you could go to school here?” he made it his single-minded focus to do just that.

Throughout high school, Bongiovi played full back and outside linebacker, dreaming of the day he’d take the field for the Irish. Three weeks after high school graduation, he was in South Bend starting practice as a walk on. “Now that was a rude awakening,” he grins. “I was prepared for college academics, but football practice was something else.”

Not that he minded daily practices starting at 5:30 a.m. Piece of cake. But that first week, when the coaches announced that Friday would be a leg intensive day, he shrugged it off as just another practice. “My buddy and I went to the cafeteria before practice and ate plates of pancakes and eggs. We get to practice, and the coaches had us run wind sprints on treadmills. Next thing I knew, we were neck deep in garbage cans puking our guts out.”

For the next four years, Bongiovi toiled away as a walk-on. “Basically, I was a tackling dummy. I got slapped around, yelled at, knocked down, got up, told no, and did it all over again the next day. People thought there was a zero percent chance I would make it all four years. I only got into two games, but I tried my hardest every day,” he says.

“On Senior Day, with my parents standing with me on the field feeling so proud, that made it all worth it.”

After graduation, Bongiovi took a job in sales with a startup in New York City. Slice was developing an app to support online ordering from local pizzerias. The CEO explained he’d be cold calling local pizza joints  and asked if he minded rejection. “I told him I had rejection skills in spades,” Bongiovi says.

For the next nine months, Bongiovi hit the pavement, learning the art of hands-on selling to a tough audience, busy pizzeria owners who weren’t convinced they needed an app to sell pizza. Bongiovi took it in stride, put his head down and kept going. “It was fun. The big takeaway was realizing everyone at a startup wears different hats. It’s how the job gets done.”

As exciting as it was to be part of a rapidly scaling startup, Bongiovi left Slice after nine months. The reason is that he’d been quietly working on his own startup with his former Notre Dame roommate, Ali Thompson. A few years earlier while on a trip to the Hamptons, a trip that involved enjoying copious amounts of rosé on the beach with friends, the two cooked up the idea of starting a wine company.

“We called it Hampton Water because everyone in the Hamptons drinks rosé wine. It’s light and crisp; perfect for drinking all day, a porch pounder,” Bongiovi says. “When we got back to campus, we started researching rosé wine.”

What they found was an opportunity in a seemingly crowded marketplace. It was largely in the positioning. “French rosé wines were very snobby, and didn’t reflect the Hampton experience of friends, family, beach, and good times. We wanted to create a high quality, affordable rosé that spoke to a younger audience that can’t be bothered with tasting notes and pretentious language and are intimidated by wine stores. They just want a good wine and rely on Instagram to tell them what to buy,” Bongiovi explains. “Our position: Trust us, it’s good. Don’t buy one, buy two bottles.”

The co-founders spent senior year working on their strategy, branding, and designing the label. Two things were lacking, a financial backer and a vintner. Bongiovi went straight to the top on both. He recruited his dad, Jon Bon Jovi—yes, THE Jon Bon Jovi—for seed money, making him a partner in Hampton Wine. To design the wine itself, he and Ali had their hearts set on French winemaker Gérard Bertrand, a former star rugby player and now among the most successful winemakers in France, with 16 estates in the South of France.

“We really like Gérard’s wines, his roots as a second-generation winemaker, and also the fact that he is a lifestyle marketer. We got in touch with him and told him our idea. He agreed to meet  Ali, dad, and I for a one-hour lunch. We met for four hours,” Bongiovi says. “At the end of the meeting, Gérard said he appreciated our passion and willingness to work. He agreed to make and import our wine for us, but we had to come to France to truly understand the process.”

The first trip to France 2017 was focused on creating Hampton Water rosé. Ultimately, the partnership, which now included Bertrand as a minority stakeholder, decided on a blend of Grenache, Cinsault and Mourvèdre grapes with rose petals, red currants, and other flavorings. The resulting rosé is dry, juicy, smooth, spicy, and entirely drinkable—perfect for long hours on the beach. Bongiovi still marvels at Bertrand’s vision. “He is a true artist at his craft.”

To launch Hampton Water in 2018, Bongiovi leaned into another artist, his dad, to make a splash. “We rented the former Versace Mansion in Miami during the South Beach Food and Wine Show, the largest event of its kind in the world. The crowd was huge and dad performing. It was epic, really bougie.” It was now time for the hard work of building a fan base for Hampton Water.

Creating the wine and the initial splash were the easy parts of Hampton Water. Creating a supply chain was altogether different. “It’s a two-tier sell, and neither is easy,” Bongiovi explains. “You have to have distribution partners to get to retail establishments. Then you have to convince retail to carry your product, and we definitely need them more than they need us. So you go to individual retailers, bars and restaurants and do hand-to-hand combat.”

Not only did Bongiovi have to battle the other 40 rosé wines on the shelf, he discovered another unexpected barrier: his dad’s involvement. “When we first met with distributors and then retailers, we were greeted with skepticism that Hampton Water was just another celebrity brand. They didn’t care about the press we’d gotten or our social media. There are thousands of celebrity brands. They’re flashy out of the gate, but typically they’re not willing to work to keep the brand going by going to liquor stores or clubs and shaking hands.

“I explained that Hampton Wine is a family business, and we were working hard to make it a success,” he says.

“The first rating in 2018 got people’s attention. At that point, people said, ‘OK, let’s try it,’” Bongiovi says. “It was gratifying, but we knew from the beginning we had to make the best rosé we could. People will buy one bottle but if it’s no good, they won’t buy again, and you’ve screwed your opportunity.”

To scale the company, Bongiovi stayed true to the founding premise of being a digital first, youth-focused brand. He and Thompson concentrated on building a major social media presence on Instagram, Facebook, TikTok, Twitter, and YouTube—more than 450,000 followers at last count—with carefully curated, fun posts reinforcing the Hamptons’ lifestyle. Take a peek and you’ll see founders Bongiovi and Thompson enjoying the pink juice, pretty people and places, and recently, a promotion with the U.S. Bartenders Guild to find the top “rockstar” bartender the in country. The videos of young mixologists creating fab cocktails with Hampton Water are entertaining, and inspire fans run out for a bottle to make it themselves.

“Dad is the Easter Bunny,” laughs Bongiovi. “He wows people. All he says is, ‘Hello everyone one. Listen to these guys,’ and they do. But he’s more than a buss creator. He’s an amazing mentor. He’s been in the music business for 40 years; he knows a thing or two about business. That’s been invaluable to me and Ali.”

Starting any business is challenging, but when you’re selling a lifestyle brand like Hampton Wine, you have to live the brand. That can be good and bad, Bongiovi says, especially when you’re sponsoring your dad’s concert schedule and using each stop as a hyper networking event.

“I realized the last nine days touring with dad what hard work this is. Dad is performing and Ali and I are hosting new clients for Hampton Water. We’re everyone’s good time—dinner, rock show—but for us it’s work and at times it gets exhausting. My biggest complaint is that it’s the best job in the world. It just makes it hard to get up and go to the gym in the morning.”

Another challenge is success itself. As Hampton Water has grown, the business has become more complicated. Says Bongiovi, “We’ve grown to a size where there are many moving pieces with more to manage on a daily basis. Still, we need to grow faster. I wish we had 50 people on our team rather than just nine. We’ll get there.”

Asked what the biggest win to date is, Bongiovi laughingly says, “We haven’t lit the house on fire.”

Maybe not, but he  and his partners have lit the world of win on fire. Hampton water is now sold in 23 countries, and after signing Albertson’s as their first supermarket chain, the wine is now sold in all 50 states through retailers like Total Wine, Sam’s Club, and Harris Teeter. For those who’d rather not get off the couch, Hampton Water can be purchased online.

While Hampton Wine’s commercial success is exciting, Bongiovi says the real win is “Two buddies from college doing what we dreamed of doing and not killing each other.”

Asked what advice he’d give others who want to start a company, Bongiovi says not to dwell on your decisions. “There is no such thing as a right answer. You will never be 100 percent right so go with your gut. Everything works out. As my mom says, ‘If it’s not right when it’s done, it’s not done. Keep going.’ That’s the best advice; keep going.”