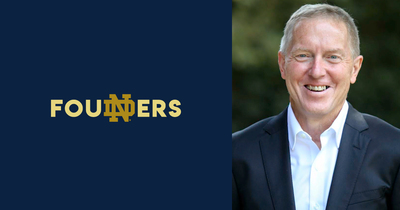 Growing up in La Crosse, Wisconsin, Keven O’Keefe had a secret. He wanted to be a lawyer. When it came time to apply to colleges, his father, an engineer, suggested engineering may be  the way to go. “If you have a trade, you will always have a job.”.

O’Keefe applied to the University of Notre Dame, but as weeks turned into months and still no acceptance letter, he resigned himself to go to Purdue University. After a campus visit to West Lafayette to tour Purdue, he and his dad were driving back to Wisconsin when his dad suggested a detour to South Bend to check on his application.

O’Keefe recounts what happened next. “We went to Admissions, and it took them a long time for them to find it. Dad wouldn’t leave until they found it; Mom really wanted me to go to Notre Dame. By the following Wednesday I was in.”

Once at Notre Dame, O’Keefe set aside his dream of being a lawyer for the time being. Following his father’s advice, he signed up for pre-engineering courses. “I was 18 years old; what did I know? All the kids in my classes were very smart. I couldn’t spell calculus. Got an F in calculus and a D in a computer class. I was doing so bad I was sure I was going to flunk out after a few semesters. Notre Dame was tough and scary.”

At that time, students weren’t required to declare a major their freshman year. O’Keefe muddled through his first year and by the end of his second year, he’d been on academic probation twice. An intervention came from Vincent Raymond,  the associate dean of the Business School. Dean Raymond assured the elder O’Keefe that his son would be OK. And he was—after switching to the College of Business. After graduation, O’Keefe went on to earn his Juris Doctor at the University of the Pacific, McGeorge School of Law, in Sacramento, California.

Returning to La Crosse, O’Keefe accepted  a position as plaintiff’s attorney with a two-man law firm. After twelve-and-a-half years, during which time he helped grow the firm to 15 lawyers and risen to partner, O’Keefe decided to start his own law firm. “It was a pretty risky time to leave,” he smiles. “My wife and I had three  kids, two  more on the way and had just bought a house. It cost a half-million dollars to buy my files from the firm. Fortunately, my bank guaranteed the loan.”

This was early in 1996 and the Internet was still a novel concept to most of the world. While watching a Green Bay Packers game, O’Keefe caught a Toyota ad with a web address. He had no idea what it was. “Websites, web addresses, the world wide web—it was all new to me. I had a computer I didn’t use and decided to turn it on and do some research,” he says.

One night O’Keefe used the family’s wall phone to dial up AOL. He typed in the words legal and law. Up came message boards driven by subjects like divorce and legal liability. “I was blown away. The world was connected like never before. People were vulnerable and open to trust someone they didn’t to help them.”

O’Keefe thought about it overnight. He decided he wanted to help people, too, and joined the AOL message boards. His answers to questions  were attracting a large online audience and generating a lot of content, so he had an intern archive the Q&As and upload them to his website. This became the precursor to his first startup, PrairieLaw.com.

“From there, I put up four Listservs: personal injury, medical malpractice, workers compensation, and employment law in 1996 and invited other attorneys to participate. I was getting 30 to 40 questions a day and began archiving the Listserv questions and answers into four daily newsletters . It was rapidly growing into something more than a hobby. I hired another lawyer to help me in my practice,” O’Keefe says.

On day a flier for a conference on internet marketing showed up on his desk. With the encouragement of his banker, O’Keefe flew to Monterrey, California, to find out what was out there. Ten minutes into the conference, he saw just how big the Internet was. He came back to Wisconsin and really started looking at the Internet’s potential for lawyers.

O’Keefe soon learned he couldn’t do two jobs at once. He could either continue to practice law in the traditional way or pursue his dream of building an online community for lawyers and the public. As part of his due diligence, he met with a venture firm in Silicon Valley and shared his idea with them. “They said my story was compelling but very few people in California would invest in my company since I was in Wisconsin. Their advice: move to California,” O’Keefe says.

That was a nonstarter. With five children to raise and get through college, there was no way O’Keefe and his wife could afford to live in California. Flying home to Wisconsin, he considered other cities he could afford. “I didn’t know anything about Austin, Texas. So no. Boston was too crowded. Another no. Seattle? The city had possibilities. Amazon, Boeing, and Microsoft were all in Seattle. Besides, they were building a baseball stadium and I could take my kids to games.”

There was one drawback. Moving from the Midwest to the Pacific Northwest meant leaving the O’Keefe’s extended family and support network behind. “My wife Jill was one of ten kids, and everyone lived nearby. We didn’t know a soul in Seattle,” he recounts. “But she surprised me and agreed to move.”

Once in Seattle, O’Keefe started networking. Among those he met was Notre Dame alumni and entrepreneur Gary Gigot. The two met at a café where O’Keefe pitched his idea for PrairieLaw.com. Gigot asked how much he needed and didn’t blink at $2 million. Instead, he told O’Keefe it would take ten people willing to put in $200,000 each.

With the funding from angel investors, O’Keefe was able to devote himself fulltime to his ground-breaking Internet startup, formally launching PrairieLaw.com in 1999. His vision was a place where lawyers could showcase their skills, passion, and care for clients as a means of tastefully marketing their services. “Think AOL on the law. We had self-help legal articles for consumers and small businesspeople, ask-a-lawyer, message boards, and a lawyer directory. PrairieLaw.com was the source of legal information and connections,” he explains.

The concept was solid, but traction was slower than hoped. The Internet was still new, and people were skeptical of the idea of lawyers using the Internet to find clients. When the dot-com bubble burst in 2000, O’Keefe found himself between a rock and a hard place. His burn rate was too high and his investors, who had continued to pump money into the company, wanted an exit. Filled with regret, PriarieLaw.com was sold to LexisNexis.

Says O’Keefe, “It was one of the saddest days of my life. I felt awful for my investors like Gary. PrairieLaw.com was my baby. How would I ever think of another idea?”

For the next two years, O’Keefe worked with Martindale-Hubbell, a division of LexisNexis, the integration of Prairielaw.com into Martindale's consumer and small business law website, Lawyers.com. When his stint was up and with no job due to a non-compete agreement, O’Keefe began casting about for his next venture.

“I set up an office in the garage, with an old door on top of two filing cabinets as my desk. Every night after dinner I would go out to the garage to work. Late one night. I found an article in Business 2.0 magazine on a web-based blog platform that claimed you could get 10,000 subscribers in 90 days. This was in 2003. I was fascinated. I decided to blog on how lawyers can use the Internet to get clients. I went into the house and told my family, ‘We’re going to build blogs for lawyers.’”

And so, LexBlog, O’Keefe’s second venture officially launched with the goal of empowering lawyers to use the Internet to connect with people in a real and authentic fashion. “I truly believed that through blogging, and later social media, lawyers could build reputations as trusted and reliable authorities.”

LexBlog would serve as a professional turnkey blog solution for lawyers, including strategy, design, search engine optimization, and promotion. Unlike PrairieLaw.com, O’Keefe took no money from investors even when he began adding employees. “I wanted to control my own destiny, so I used credit cards to fund the company,” he explains.

O’Keefe personally wrote all of the posts on his personal blog, and the more he wrote, the more law firm clients he attracted to publish blogs of their own. His revenue model was subscription based; once clients were onboarded, they stayed on board, compounding LexBlog’s revenue stream.

Ninety days in LexBlog, O’Keefe was invited to speak at a meeting of the Legal Law Marketing Association. “They introduced me as the leading authority on blogs for lawyers and I was barely out of the gate. Lawyers from around the country, from the smallest to the most prestigious, started reaching out to me on how to use blogs to market their firms.”

Nearly 20 years later, LexBlog has now grown into the world’s largest legal publisher, an achievement O’Keefe has reached on his terms.

The company boasts 600,000 blog posts by 27,000 authors representing 1,800 law firms. The American Bar Association and other key industry organizations routinely cite LexBlog as the legal industry’s authority on social media marketing. He is proud of the fact the company was built without investor funding and gained traction due to word-of-mouth rather than paid advertising.

O’Keefe says the biggest challenge of founding LexBlog after his less than satisfying exit from PrairieLaw.com was second  guessing himself on whether or not he was doing the right things. “I had these regrets around PrairieLaw.com and didn’t want to succumb to the pressure of investors or a bad economy. I wondered if I was capable of leading LexBlog. I got scared along the way. I felt like a little kid when I walked into the biggest law forms in New York City to tell them how to market their firms,” he says.

“Ultimately, there is no perfect CEO. I learned to go with my gut, be confident, and above all, be myself,” he adds.

His greatest joy is helping attorneys connect with people to improve lives. “Notre Dame reinforced my desire to help others. When I was struggling academically in my undergraduate years, there was always someone at Notre Dame who wanted to help me.”

O’Keefe offers this advice to others who want to start a company, organization or career as a blogger. “Find the thing that you love where you can make a difference. Go for it even if it’s scary.