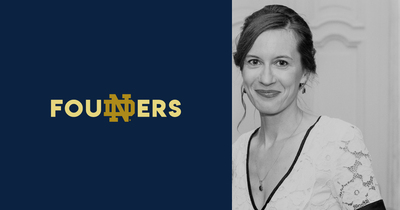 During college in her native Romania, Anca Burke interned with the Peace Corps in Bucharest. Inspired by the passion of the American volunteers, she joined the Peace Corps full-time after graduation in a finance role. “This was my first time to work with Americans and I was impressed by their motivation to serve in other countries. It’s not always easy to learn another culture,” she says.

One American volunteer in particular caught her eye, Josh Burke. They two became engaged and decided to pursue MBAs to support careers in international business. “We initially looked at universities in Europe. In 2005, I took my first trip to the United States with Josh with the plan of choosing an MBA program in the Chicago area. After visiting the University of Chicago, Northwestern and University of Notre Dame, our choice was easy,” she says.

Josh’s decision may have been swayed by the fact that his father and grandfather were Notre Dame alumni. Burke had no previous connection with the University, but the community of people she met during her campus visit won her over. “As an international student with no firsthand experience in America, my needs were different than a typical student. I had to figure out how the culture worked psychologically and business wise. It’s hard to put into words the value of Notre Dame. I felt really supported, which helped me transition to living in a new country.”

Like many graduate students, the Burkes rented a house in South Bend when they arrived. Maybe it was her degree in Finance, but Burke says the couple soon decided to buy rather than rent. They bought a small home and then another and another. The pragmatic dive into real estate led to Burke’s first startup, Trajan Global Capital.

She smiles at the name. “At the time, Trajan was a hobby business. What we didn’t know at the time was that it would grow into a much bigger real estate company.”

After graduation, the Burkes moved to Chicago. She had secured a job with IBM Consulting in their industrial and manufacturing segment, advising clients on business transformation and process improvement. But before that, the couple had to find a home.

“We met with a real estate broker with the idea of buying a condo,” Burke recalls. “She advised us to take a different path and buy a multifamily building with three flats. We could live in one and rent the others. The property would pay for itself. We took her advice and continued to partner with her on real estate.”

Over the next six years, the couple spent weekends looking for other real estate investment opportunities. They found a mixed-use building with commercial space on the first floor and multifamily units on the upper floors. Because the developer had gone bankrupt, the building was never completely finished. While discussing the building with a friend, he surprised her by saying, “I’m in. How much money do you need?”

A one-million-dollar investment later, Trajan Global Capital had its first major real estate project in Chicago. “This took us to the next level,” Burke says. “We landed our first investor and because we had to finish the building, we became more deeply involved with architects, contractors, permitting, and property management than we’d ever been before. It was a great learning experience.”

More real estate deals followed. Trajan Global Capital’s sweet spot was smaller multifamily buildings in Chicago neighborhoods in transition. “Our strategy was to acquire buildings in areas on the verge of revitalization. We only bought in areas where we’d feel comfortable living,” she explains.

As the company and its property portfolio grew, Burke, who by this time was a consultant with the Blue Cross Blue Shield Association, came to truly value the importance of having the right partners. At every level, from real estate brokers to contractors to janitors, she and her husband chose partners they could lean into and trust.

Those partners became increasingly important when Josh Burke, who is a member of the United States diplomatic corps, accepted a series of overseas assignments. In 2014, the couple moved to Ankara, Turkey, for two years. Then it was off to Romania for five years where she worked as chief strategist with idrive Global, an America-based tech company. More importantly, Burke and her family, which now included two children, got to spend time with her parents and grandparents still in Romania.

In 2020, the Burkes returned to the United States, moving to Sedona, a beautiful destination town in the Arizona desert. Quickly shifting back to real estate mode, the couple saw an opportunity to develop a new short-term residential concept in their new hometown.

“Sedona has many hotels and Airbnb, but the rates were very expensive, especially for the new class of digital nomads brought on by the COVID pandemic. We are now developing The Bedouinn, a six-flat building in the heart of Sedona that will have the amenities of an Airbnb but at more affordable rates. We are targeting people who want to work remotely in a beautiful place for a month or two,” she explains. The project is slated for completion and will begin welcoming guests around mid-June.

Burke is an entrepreneur at heart. While advising the CEO of a startup, the two developed a new concept. In 2020, she and Jordan Youtz founded OnlineBar. Initially, the idea was to transform the customer experience at bars where ordering beverages and food, especially in busy establishments, can be hectic and disorganized. The value proposition of OnlineBar was to provide bars with a touchless solution that combined digital menus with the ability for patrons to order and pay with cell phones.

While OnlineBar sounded good on paper, it failed to gain traction in implementation. “Bars are very resistant to change,” Burke says. “While servers liked OnlineBar, owners did not. We had to change our approach.”

Market forces had hand in OnlineBar’s pivot. Ongoing pandemic lockdowns of bars and restaurants caused a major change in customer behavior. Because patrons couldn’t go to bars, they began ordering alcohol online and enjoying adult beverages at home. Even as lockdowns were abandoned and businesses have been allowed to reopen, bars have had a difficult time getting people back to in-person social venues.

Necessity being the mother of invention, Burke and her team transformed OnlineBar into a platform that drives traffic to bars, restaurants, wineries, breweries, and other hospitality establishments by offering special online offers in the form of unique, exclusive offers and discounts. Customers can search for, order and purchase offers in advance, cashing in when they visit the bar or restaurant using a QR code The offers are only good for seven days, creating immediacy and urgency to the offer.

Burke likens OnlineBar to Groupon or Yelp where patrons search out the best deals in a specific city but says OnlineBar is much more dynamic. “What’s exciting is we help our customers drive traffic on slow days like Monday through Wednesday or create demand during off-peak hours. We can also create demand for specific beverages—craft cocktails, beer or wine—whatever the customer wants.”

Burke and the OnlineBar team participated in the Notre Dame McCloskey New Venture Competition in 2020. During the competition, Burke’s tech partner passed away unexpectedly at the age of 32. It was a terrible blow personally and professionally.

“I had to assess if we could continue as a company,” Burke says. “It was challenging having to cope with the death of a team member who was a friend and colleague. What made it even more difficult is he had important assets and being based in Romania made retrieving those assets very hard.”

After four months of reflection and effort, Burke was able to recover the code behind OnlineBar. The company’s launch is now on solid footing. Burke was invited to exhibit at the Synapse Innovation Summit in Tampa in February. While there, she met with bar owners in Tampa and St. Petersburg discovered a welcoming culture in which to launch OnlineBar.

“In Florida, people are back out and enjoying in-person socializing. That said, there’s room to drive more traffic to bars. Our proposition is to make happy hours happier. We’re now live in St. Petersburg and will use it to finetune OnlineBar and start to scale.”

The busy real estate mogul and tech startup founder offers this advice to other who want to start new ventures. “Surround yourself with the right people; people who know more than you. Don’t think ‘ don’t want to bother anyone.’ Ask for help. There are always resources out there, including the Notre Dame network, you can tap into.”