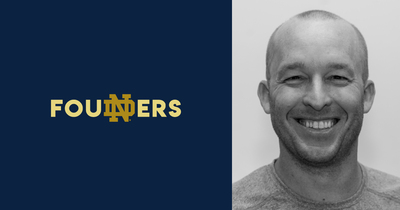 If you’ve seen the film A River Runs Through It, it’s easy to understand why people don’t just like flyfishing, they have a deep abiding passion for it. The streams are nearly always in breathtaking locations. The fish are elusive. The process of casting in big, easy loops is more like a slow-motion ballet than traditional fishing. Even the bait, bits of feather hand-tied to resemble a savory insect, is a work of art.

University of Notre Dame graduate Brian Kuske discovered flyfishing after relocating to Charlotte, North Carolina, from Chicago with his wife Michelle in 2014. He had an opportunity to go flyfishing on the Davidson River, just outside Asheville, North Carolina, and fell in love with the sport.

Little did he know his casual encounter would lead to a startup company. To this point, Kuske was pretty much a corporate guy. After earning a degree in Finance from the University of Illinois, he joined United Airlines in Chicago as an analyst. It was, he says, a great first job.

“Every day I lived Economics 101. If we changed fares by $10, the impact was immediate. Booking volume up, booking volume down. The industry is so competitive that any changes we made had a reaction. The pay wasn’t much, but it was a great jumping off point, and I was able to travel for free for four years. My last year with United, I flew 100,000 miles for pleasure,” he says.

Growing up in Naperville, Illinois, Kuske always had a soft spot for Notre Dame. Wanting to break into investment banking, he applied to Notre Dame’s MBA Program within the Mendoza School of Business and was accepted. One of his biggest takeaways from the experience was, he says, “learning to do things the right way.” Another unexpected takeaway was meeting his future wife and fellow MBA candidate, Michelle Lanouette. “That in itself made graduating from Notre Dame the right decision,” he says.

With his MBA in hand, Kuske landed a job with Lincoln International in Chicago as an investment banking associate in 2012. While working 100-hour weeks, he soaked up all he could doing sell side, middle market mergers and acquisitions. “I got to look under the hood of a lot of interesting businesses.”

Seeking a change, he and his wife moved to Charlotte, in 2014. He joined Red Ventures, a digital media company, rising from director of operations to vice president of global operations in just four years. In his final role, he led all recruiting, on-boarding, training, analytics, and global strategy for a 1,600-person sales organization. “My time with Red Ventures was invaluable because they gave me a ton of responsibility early in my career. I was owning P&Ls much bigger than my experience warranted. I learned to lead and wouldn’t be where I am today without the significant growth I experienced at Red Ventures,” he says.

It was at this point that Kuske again found himself at a transformational point in life. “I was online trying to book a guide for a flyfishing trip with some friends and was totally frustrated by the process. Most of the outfitters had very rudimentary websites. There is also no easy way to compare guides to see what each one was offering in terms of price and services. It felt like there should be a better option,” he says.

While mulling around the idea of a startup company, he and his wife learned they were pregnant with their first child. Michelle wanted to continue working after the baby’s birth so Kuske decided he would be a stay-at-home dad and entrepreneur. “Michelle had a really good career with Amazon. It gave us tremendous flexibility in how best to care for our new son and launch a new business.”

Thus, the Gyded platform was born with the goal of aggregating and connecting flyfishing outfitters, guides, and enthusiasts onto a single platform to simplify the experience of searching, comparing, and booking a guide for an upcoming trip. Execution of the idea was a little more complex. Kuske had to learn how to be a full-stack developer to build the front end and server side of the platform.

“I taught myself JavaScript, Bootstrap, Node.js, Express, AWS, MongoDB, Heroku, GitHub, and RESTful APIs,” he says. “I did it partly out of necessity as a solo founder but also as a labor of love. I enjoy learning new things and have always had an interest in computer science. Doing it myself also allowed me to bootstrap all aspects of Gyded,” he explains.

What Kuske didn’t know is this self-immersion into coding was preparing him for yet another venture, a SaaS business for the roofing industry. In early 2021 he acquired Roof Chief, the leading cloud-based CRM and business management platform specifically built for the roofing industry. “I was actively looking for my next challenge and got lucky and came across Roof Chief at the right time. It was started by a roofer and a computer engineer, and though it was eight years old, it was basically an early-stage startup. The owners had taken the company as far as they could. I saw the potential, and now together with a small team, plan to aggressively grow the company over the next five years.”

Setting Gyded aside, Kuske has since focused all of his energy on Roof Chief motivated by the opportunity to move roofing companies from old school paper-based businesses to a fully digital operation. “Trades–based businesses have been slower adopters of technology. Our platform enables roofers to stay on top of their business, easily communicate with potential and current customers, and quickly create precise estimates and proposals all while understanding their profitability to a much higher degree.”

Adoption of Roof Chief, which operates as a SaaS model, has been slow and steady. The largely mom-and-pop owned industry is being encouraged to adopt software-based business solutions by the younger generation—their children and customers—who prefer to do business digitally. The COVID pandemic has created more incentives to move to platforms like Roof Chief, Kuske says.

“During the height of the pandemic, people became much more sensitive to letting anyone in their homes to do work, let alone folks they didn’t know. At the same time, people became much more comfortable acquiring products and services digitally. This has accelerated the move to tech solutions, even for trades-based businesses like roofing. It’s become a necessity to remain competitive,” he says.

The space is lucrative. Roofing companies gross anywhere from $1 million to $25+ million annually. The industry is also fragmented, with few large corporate roofing companies. While there are CRM competitors in the space, Roof Chief is the only platform solution focused entirely on the roofing industry. It also delivers an all-in-one cloud-based solution that roofers can access on the job site or in office via a web interface. Kuske plans to add an app in the near future and continue to bootstrap as long as possible.

“Right now we’re retooling the platform for better scalability and ease of use before we turn on the marketing and growth drivers this summer. The plan is to engage customers with a two-week free trial and then bring them on as paying customers. Once they do commit, we are very sticky,” he says.

Of Kuske’s two active companies, Gyded has earned a special spot in his professional portfolio despite its limited success. He attributes the lack of traction to two things: the COVID pandemic and a disconnect on product market fit. About 18 months after Gyded’s launch, the COVID pandemic struck, shutting down tourism and many recreational pursuits, including guided flyfishing trips. While outdoor activities rebounded fairly quickly, Kuske came to realize an issue with his product-market fit.

“Gyded has two sides of the business. Side one was flyfishing enthusiasts. Our users really loved Gyded as it made finding and connecting with a guide or outfitter online really easy. They also liked the third-party reviews of guides on our site. But the flip side, the flyfishing guides, was a total disconnect. They were already booking out their trips, so they didn’t have a pain point. The pushback we got was, ‘Why should I pay you ten percent for referrals when I’m already busy? Why should I publish my rates online?’ Flyfishing is a tight, niche market and when we launched the response from guides and outfitters was, ‘We’re good.’”

Kuske pauses and continues. “In hindsight, I should have offered the service to them free of charge to get them on the platform, serving more like a yellow page directory.  We’d monetize once we built a user base. It’s a tough and longer route, but it was probably the route to go.”

Later this spring, Kuske and his wife, two sons, and two Goldendoodles are moving to Bend, Oregon, a flyfishing mecca. Once the family is settled, his attention will be primarily on growing Roof Chief. Gyded, just like the elusive “brookies” that prowl the trout streams of America, will still be there, quietly waiting for Kuske’s second cast at the prize. Perhaps then he will get a strike.

“I really enjoy flyfishing and hope to do more of it in Oregon,” he says. “Gyded was such a great experience. Flyfishing is a fascinating niche; people are extremely passionate about it. It’s a lifestyle onto itself. I learned so much from the experience, including how to develop a software platform. It wasn’t planned, but it really set me up well for Roof Chief. That in itself is a big win.”

Kuske offers this advice to others who want to start and scale a new venture. “First, you have to be an expert in the area you are starting the business. Your customers will recognize it if you don’t. Second, you have to have an angle, something you are doing differently that is ten times better than your competitors. Third, everything will be harder and take more time than you thought. Make sure you have two years’ worth of money for living expenses and a very supportive spouse. Fourth, bootstrap for as long as you can and only raise money if you must. As soon as you take money from investors, it’s no longer your company.”

He adds, “And if you can’t do all of the above, work for someone else. It’s a whole lot easier and more lucrative.”