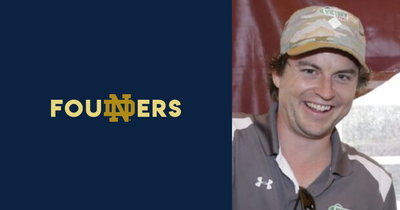 Joseph Rehmann was born in Egypt, then split his growing up years in Wisconsin and Middle East gulf countries. Little did this global nomad know that one day his wandering would take him to Kenya, where he would put into practice fish farming techniques first perfected by Egyptian pharaohs 3,500 years ago. And, in so doing, bring nutritional stability, economic empowerment, and pride to a nation eager for change.

Funny thing is, at the age of 22, this University of Notre Dame graduate’s early career was focused more on making money than using business as a force for good. Like many of his fellow students, Rehmann launched his career in finance, spending five years in various roles for the likes of Morgan Stanley, Microsoft and D.A. Davidson.

“All I wanted at that time was the most financially attractive job I could get,” he says. “But I knew I would eventually do something different with a social and environmental focus.”

While at Notre Dame, Rehmann was deeply involved in the Student International Business Council (SIBC), the university’s largest student organization and one that fosters peace through commerce. “I spent most of my time with SIBC, making friends and meeting people who became lifelong mentors,” he says.

After five years in the financial services industry, Rehmann decided to pivot his career. While he liked banking and the tools he had learned from the industry, it didn’t have the human impact he yearned for. “By that time I knew that I wanted to be involved with African investments and sustainable food projects. So I earned a Master of Business Administration at INSEAD to expand my global horizon and build a network specifically in Africa.”

Upon graduating in 2012, Rehmann found himself heading to Africa to work for a food-focused private equity fund then owned by Cargill to evaluate potential acquisition investments in Ghana. What he thought was a short-term assignment as chief financial officer stretched into three years. That didn’t matter; Rehmann had fallen in love with the impact of aquaculture on Africa’s long-standing issue of food insecurity.

“When the assignment at the Ghanaian fish farm ended, I was faced with a decision: should I go back into private equity or build a sustainable fish farming platform in Africa? I decided I wanted to on bring innovation and technology to farming fish, a practice first used in Africa by Egyptian pharaohs,” Rehmann explains.

His decision was not a financial play, but instead a drive to effect real change. “Africa’s food issues were clearly not getting better for at least a half billion people, especially for those living in rural areas. Ongoing droughts, political conflict, and weather extremes have led to chronic malnourishment. While in Ghana, I worked with Cargill senior leadership and gained tremendous experience. It became clear to me that with technology and innovation, the aquaculture industry could fundamentally disrupt the global protein market and re-shape the future of food.”

In Africa and across the world, Rehmann believes it’s time to return to regionalized food production and vertically integrated supply chains to achieve greater control, transparency, consistency, and to mitigate disruptions like those caused by the global pandemic. He points to China’s dominance of tilapia market as being ripe for change. “The majority of Chinese fish farms use chemicals in their production processes. Once harvested, the fish is glazed with water, and you end up shipping and paying for ice. It then takes a year for the tilapia to get from China to Kenya,” he says. “Contrast this with regionally produced foods. This represents incredible opportunity for producers and a win for consumers who want high quality protein at affordable prices.”

Rehmann decided to take the knowledge gained in Ghana and launch his own fish farming enterprise, believing technology and innovative business models would enable him to transform the industry and begin to solve many food issues. In 2016, he and co-founder Steve Moran launched Victory Farms in the rural community of Roo, Homa Bay, Kenya with the mission of being the world's most sustainable fish business.

Why Kenya? “It is a lovely place to live,” he says with a smile. “Kenya is home to Lake Victoria, the world’s largest freshwater lake by surface area. It has the potential to be a breadbasket to millions. Tilapia is a native species of Lake Victoria, which lends them to farming. Many Kenyan communities have fish-eating cultures and have fished for wild tilapia for generations. Instead of changing regional preferences, we are going to market with a product that consumers recognize and enjoy.”

He adds, “Tilapia are at least 70 percent less carbon intensive to raise than chicken and are among the most efficient converters of vegetables to protein. The future of protein in Africa and the world is fish.”

There was a final reason: wild caught fish in has declined by 90 percent driven primarily by overfishing and environmentally harmful fishing practices. Generations of Kenyans whose livelihoods relied on fishing faced a dire future. The hard truth was not lost on a government official in charge of Kenya’s fishing industry whose approval was key to locating Victory Farms on Lake Victoria, a public resource.

“I went to a conference on fish and this official, a very powerful man, was there. I told him what we wanted to do, and his eyes lit up. He had seen fish farming on YouTube. He knew wild catch fishing on Lake Victoria was no longer an option. His vision was lake-based fish farms and to convert fishermen to fish farmers. At great political risk, he supported our ambitious vision and allowed us to establish Victory Farms. He remains a great friend to this day,” Rehmann says.

Approval in hand, Rehmann and co-founder Steve Moran went in search of the ideal location. Their criteria centered on factors such water quality, access to roads and electricity, and finally, local support to host a fish farming operation and people available to work. The two men used a small boat to visit a series of villages on the shore of Lake Victoria to find a community interested in hosting a commercial fish farming operation.

They were initially greeted with a degree of skepticism. Almost every village they visited had a story about a bad experience with foreign non-governmental organizations that had come in with good intentions and left. “We definitely had to overcome distrust of foreign investors. Even so, there was a lot of curiosity about what we were doing,” Rehmann says. Ultimately, the ideal location was chosen between the fishing villages of Roo and Ukula.

Like any other startup, Victory Farms was faced with the challenges of building their physical, human and technology infrastructure. Their physical plant involved building a hatchery on land, farming cages on the lake and processing facilities on land. Special attention was given to creating a hatchery that integrated the most environmentally conscious aquaculture processes.

“We worked with people at Auburn University and Stirling University to design a new hatchery system that replicated natural processes as closely as possible. We use zero antibiotics and recirculate water for the eggs until they hatch into fry. The fries live in the hatchery until they are big enough to put cages on the lake. It takes 11 months for the fish to grow from egg to plate size,” Rehmann explains.

Victory Farms is a fully integrated operation, controlling the entire value chain. Mature fish are taken to the company’s processing plant immediately after harvest, where local staff members process, gut, clean, ice, and package the fish into temperature-controlled containers, ready to be transported to Victory Farms’ logistic centers in Nairobi and Western Kenya. From there, the fish are delivered to branches, where Victory Farms directly serve local market women who further process and sell the fish. What’s astounding is the entire process of lake to plate takes less than 36 hours, with no chemicals or preservatives. Contrast this with China’s tilapia supply chain, which can take more than a year before processed fish reach Kenya.

“There is a big difference in locally produced and imported tilapia—people can see and taste the difference,” Rehmann says. “And while our customers pay a marginal premium for Victory Farms’ fish, they don’t hesitate as their end consumers prefer the fresh Kenyan fish.”

In the five years since its founding, Victory Farms has amassed a wealth of accolades: fastest growing fish farm in Africa; producing 30 metric tons of fish per day, the equivalent of 20 million high protein meals a year; having the most efficient cold chain system in Africa selling to mass market towns; and operating most capital efficient tilapia production system in the world.

What makes Rehmann most proud is the community impact of Victory Farms. The company has grown to more than 500 employees. On average, wages start at $100 per month versus the minimum wage of $60 per month. Paying a living wage can have a transformative impact in terms of creating financial stability. He has also used technology and data to place people in the right jobs and support employee development. “We believe in local talent, so we invest in local talent.”

Rehmann has succeeded in overcoming the trust issues of the early days. He and his co-founder have helped set up clear water stations to combat water-borne diseases, sponsored local students to pursue higher education and invested in local roads. Their impact is deeply appreciated. When Rehman’s third daughter was born in 2020, the Kenyans showed their gratitude by naming her Nya Suba, which translates to “daughter of the land.” It was, he says, an incredible honor and reflects the true nature of the relationships between Victory Farms and its community.

Africa is a different operating environment so each step of Rehmann’s journey has revealed new opportunities and new ways to adapt and succeed. “We are doing something that has never been done before. We move fish across 12 counties in Kenya with no ice or electricity and yet no spoilage. No one can believe what we do. What has been critical is reinventing technology and processes to be more resilient,” Rehmann says.

He cites two big wins to date. Designing a new model for sustainable fish farming is the first. Rehmann marvels at the people from top universities and consulting firms around the world who wanted to support Victory Farms and be part of its success. The other win is much more powerful. “It’s unbelievable the amount of impact we have on employment, food security and the environment. There is nothing I could have done with my career that will have greater impact than Victory Farms.”

Rehmann may have spoken too soon. He has other high impact ventures in the works. He anticipates that Victory Farms will be exporting tilapia to other African nations this year. In 2021, he launched a second fish farm in Rwanda, Kivu Choice. He is involved with Pyramidia Ventures, a venture studio focused on building sustainable food-focused businesses in East Africa. Finally, he is planning his first formal fundraising round, a Series C, later in 2022 to support a regional investment plan of $75-80 million. Directing the raise is Flamingo Capital Partners, an ESG-focused investment advisory firm founded by Goldman Sachs’ former head of Sub-Saharan Africa.

Asked what advice he would give someone thinking of starting a company, Rehmann turns reflective. “For me, it was very clear I couldn’t live with myself if I didn’t try. The fear of failure is inconsequential compared to the fear of never trying. Be courageous and faithful in how you build your network, knowledge and competency. Finally, find a business partner who complements you.”