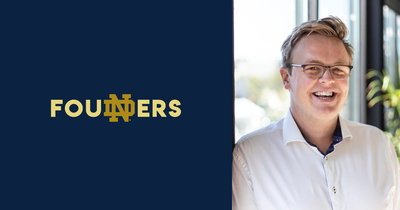 Growing up in Ireland, the idea of wasting food never crossed Rian Mc Donnell’s mind. “I was a vacuum for food,” he says with a smile. “My mom never had to tell me to clean my plate.”

Today, however, food waste and the environmental impact are about all Mc Donnell thinks about. There’s a good reason. He is the founder and CEO of FloWaste, a technology company focused on turning the tide of food to landfills and in the process, significantly reducing greenhouse gas emissions.

The problem he seeks to solve is huge, and unless you’ve taken a deep dive into the topic, one that largely goes unnoticed. To put it in perspective , the World Wildlife Fund estimates one-third of all the food produced in the world goes to waste. That’s equal to about 1.3 billion tons of fruits, vegetables, meat, dairy, seafood, and grains that either never leave the farm, spoil during distribution, or are thrown away by hotels, restaurants, schools, supermarkets, and by consumers in their own homes.

That’s only part of the story. All of the energy that went into producing, packaging, and transporting the food is also wasted. Food rotting in landfills produces methane, a greenhouse gas more potent than carbon dioxide. “Decomposing food in landfills accounts for seven percent of world’s greenhouse gas emissions,” Mc Donnell explains. “The world’s food chain is responsible for one-third of all green house gas emissions. Everyone has to eat so we can’t just shut down food production. What we can do is improve systems.”

The idea behind FloWaste originated during Mc Donnell’s undergraduate and post graduate years at Trinity College in Dublin, Ireland, where he earned both a bachelor’s and master’s degree in Engineering. Coming up with a topic for his master’s thesis was fairly simple. “Whatever I did, I wanted it to be in the realm of sustainability. Although I had no real experience in the food industry, I chose the topic of food waste.” And thus his obsession began.

Over the next nine months, he immersed himself in the food industry, speaking with hundreds of stakeholders in agriculture, food processing, restaurants and foodservice. With each interview, his understanding of the pain points became clearer, allowing him to home in on the problem statement.

“Among the major things that I realized is that we can’t rely on individuals to end food waste. Yes, we can all become more conscious about consuming what we buy and prepare. However, to make a real and lasting  impact, we have to make changes to our food systems,” Mc Donnell explains.

By the time he gave his dissertation, Mc Donnell had a product: smart tray systems equipped with cameras to document uneaten food. While his project earned high marks, his product was deemed too complicated to commercialize. “I knew I had to start over,” he says.

In 2019,McDonnell enrolled in the University of Notre Dame’s ESTEEM Master of Science program. The 11-month program is designed to immerse students with academic backgrounds such as engineering and science in the hands-on learning of business and entrepreneurship. The program’s goal is to prepare students to take leadership positions at the intersection of business and innovation, whether starting their own companies or working for others.

“I was attracted to ESTEEM by the opportunity to move beyond engineering and into business,” Mc Donnell says. “I knew that FloWaste had to solve both sustainability and business issues. During my time in ESTEEM, I worked on FloWaste and pivoted from a physical product, the tray system with a camera, to creating a data analytics platform. The idea was to provide people in the food industry with the data they need to make decisions on how best to be more efficient, reduce food waste and the environmental impact, while putting money back into their bottom line.”

One of the most valuable experiences of the ESTEEM program says Mc Donnell was a trip to San Francisco during spring break. While there, he and his classmates met numerous Notre Dame alumni as well as Silicon Valley entrepreneurs and funders. “The trip was eye-opening and the introductions I made were phenomenal. It really helped in setting up my company.”

Mc Donnell was fortunate to have visited California when he did. At the time, lockdowns from the global pandemic were just beginning. The fact that the trip happened at all could be attributed to the luck of the Irish. He and his classmates closed out the program with a virtual graduation ceremony in May.

The other valuable benefit of the ESTEEM program was the expert coaching and support provided by Notre Dame faculty. For example, Jarek Nabryzski, founding director of the Center for Research Computing, helped Mc Donnell apply for a National Science Foundation SBIR Phase I award. While awaiting a decision, AFWERX, the innovation funding arm of the U.S. Air Force, put out a call for applications.

“We had already done the groundwork with the National Science Foundation, so we applied for the AFWERX award, too,” Mc Donnell says. “In February 2020, AFWERX awarded us a SBIR Phase I grant worth $50,000. The project would focus on reducing food waste in Air Force cafeterias and optimizing the nutrition of war fighters. If it was successful, FloWaste would be in line for a Phase II SBIR award worth $750,000. Indiana’s Elevate Ventures came in with a matching award of $25,000.”

Mc Donnell explains. “We were accepted into AFWERX, but with staffing and administrative issues caused by COVID, our application was lost. We never got the money. Then Elevate Ventures pulled their funding and the pilot projects we had lined up with restaurants were postponed until we had more data.  I’m not going to lie; it was a pain in the @#!. Although we plan to reapply to the U.S. Department of Defense in the future, we decided to address immediate funding needs and continue digging into the food waste problem.”

The year 2021 found FloWaste back on track. The company raised a pre-seed round of $200,000 through Midwest angel investors, while doubling down on finetuning their platform technology. Today, it is a far cry from the original prototype of a cameras and food tray. FloWaste’s food analytics platform uses proprietary image recognition technology to empower cafeteria providers and industrial protein producers to reduce food waste. FloWaste allows food providers to optimize meal preparation, ingredient combinations, and portion sizing, while reducing labor costs, to maximize profits and minimize excess.

Mc Donnell and the FloWaste team have specifically designed the platform so that it integrates seamlessly into a customer’s site. No data entry is required of the customer; they conduct business as usual, preparing and serving food. FloWaste sets up their system and using high resolution 3D video, machine learning and computer vision, it captures data, classifies, and quantifies food waste instantly. The data is provided to the customer for analysis and ultimately, actions to avoid waste.

“We tell customers that with FloWaste’s data, they can reduce procurement and disposal costs by about $12,000 a year. We also help reduce manual inventory and waste management, saving on labor. The waste reductions make their business more sustainable and cuts green house gas emissions,” Mc Donnell says.

When FloWaste was founded, they had one target market, quick serve restaurants. That has expanded to two solutions: FloVision Cafeteria targeting school cafeterias, and FloVision Industrial, which is geared toward meat processing. FloWaste currently has a pilot project with a beef processing company in the United Kingdom. “We are studying how they trim the carcasses to identify waste. The goal is to reduce trimming so less meat is downgraded to ground beef or other use. By increasing the yield of each carcass, we hope to reduce the number of cattle to get the same amount of meat,” Mc Donnell explains. FloWaste is in negotiations with a second beef processing plant. Future plans include addressing other types of meat processing facilities.

FloWaste has a second major pilot program  underway utilizing their cafeteria solution with Chicago-based Gourmet Gorilla, a school cafeteria meal provider that serves 150 schools serviced through one central kitchen. According to Mc Donnell, school lunch programs expect 10 percent of all meals to be wasted but typically do not have a handle on the number of meals served per day or the true amount of waste.

“The worst-case scenario for a school lunch program provider like Gourmet Gorilla is to run out of food before every student is served. To avoid this from happening, they typically oversupply the number of meals by ten percent. The waste is terrible because it is actually much higher. What further complicates this when they supply a school with several lunch options—a hot meal, sandwich and Lunchables meal kits—and not knowing which students will choose on a given day,” Mc Donnell explains.

“Lastly, while you’d think it would be easy to determine how many lunches are served, the counts are usually done by a person standing at the end of the lunch line clicking a hand clicker. Are they getting an actual count or guessing? It’s not very accurate,” he says.

The purpose of the Gourmet Gorilla school cafeteria pilot is to capture actual data: number of students served, meal choice, meal choice by day of the week, meals served and chosen by grade level, and ultimately pinpointing waste across this spectrum. With cameras and software capturing and tabulating meals served and wasted, schools and their lunch providers finally have real data to use in decision-making.

“Frankly, the data we are uncovering is eye opening,” Mc Donnell says. “We identify overarching trends, and quite easily breakdown the data on who is wasting food, days when waste levels are higher, and the number and type of meals wasted. And because the federal government pays $4.10 per meal, it’s quite easy to monetize the waste and provide a more accurate understanding of loss versus revenue. If schools districts commit to FloWaste, they have a real opportunity to develop a better, more profitable school lunch program and reduced planned waste.”

FloWaste is currently in two Gorilla Gourmet schools and will scale to 10 schools by April 2022. Mc Donnell says the goal is to be in 50 schools by fall 2022, with an eye to expanding into other cities.

In addition to overseeing FloWaste’s pilot projects, Mc Donnell has continued to aggressively fundraise. In November 2021, the company announced it had closed a $1.2 million pre-seed round led by Underdog Labs, a micro venture capital firm based in San Francisco. Rockstarts, a European-based fund for agri-food startups, also participated. In the round. Mc Donnell and Weimholt also participated in Rockstarts’ Agrifood Accelerator in 2021, which provided industry insights and networking.

With the influx of capital, Mc Donnell says that by May FloWaste will shift from proof of concept to sales and scale mode. He is ready for the change of pace, calling the last three to six months of product development intense and valuable. “We now have a solid solution so it’s time to start the sales cycle. I am not naturally good at networking so that’s a new challenge for me.”

The biggest win to date is definitely the FloWaste team. Mc Donnell and Weimholt were meticulous in the search and selection of people who share his mission of ending food waste and have the necessary skills to develop and grow the company. “We now have six full-time people so the bandwidth of what we can do is much broader larger. The talent and focus are incredible. Everyone has a passion for  the business and wants to help and learn,” he says.

Mc Donnell’s advice to others who want to start a company and especially one with aspirations to change the world for the better. “First, realize that solving complicated problems is really difficult. The biggest thing you can do is understand the problem. Don’t be happy with initial answers. Keep digging! Get to the emotional level. Plan on pouring hours into discovery and know you must always keep learning.”