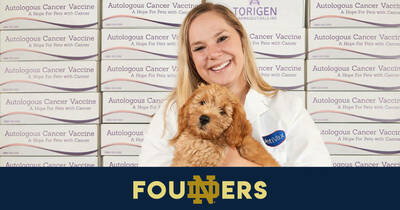 The words are ones no pet owner wants to hear.

Inevitably, you ask, “What can we do? How much will it cost?” Upon hearing the cost to treat cancer in a beloved pet can range from $5,000 to $20,000, many pet owners forego treatment. It’s simply too expensive. And, with only 350 veterinary oncologists practicing in the United States, getting in to see an oncologist is another big barrier for pet owners.

This scenario has always bothered Ashley Kalinauskas, an animal lover and graduate of the University of Notre Dame’s ESTEEM Master of Science program. So much so that she is now the founder and CEO of Torigen Pharmaceuticals, a company that is commercializing a new approach to cancer treatment for companion animals that mimics sophisticated immunotherapy used in humans.

In addition to its ability to treat most solid tumors, Torigen’s cancer vaccine costs a fraction of what traditional cancer treatments cost. Removing the financial barrier to cancer care for pet parents is what motivated Kalinauskas to launch her company in 2013 and to muscle through all of the hurdles startups face.

“I grew up with a black Lab and now have a mini Goldendoodle named Dave who gets away with everything. I just love animals,” Kalinauskas says. “During my undergrad years at the University of Connecticut, I started taking animal science classes and wanted to learn more.”

That desire led her to Notre Dame, where in 2012, she was admitted to ESTEEM, an 11-month master’s degree program in which students from technical backgrounds are immersed into the world of entrepreneurship and equipped with the skills and know-how to launch companies and become high-performing innovators and leaders.

“I was attracted to ESTEEM because it combined my love of science with my interest in expanding my knowledge of business,” Kalinauskas explains. “I was fortunate to work with Dr. Mark Suckow, a veterinarian whose research was focused on developing vaccines derived from tumor tissue as a way to create personalized vaccines for human cancer patients.”

Kalinauskas began thinking about the possibility of pivoting Suckow’s technology to animals. “Mark also believed it would apply to animals. So we began working on the idea of bringing a personalized cancer vaccine to market for dogs, cats and other companion animals like horses.” The project became her ESTEEM thesis.

Buoyed by the commercial potential of more effective and affordable cancer treatment for animals, she entered Notre Dame’s McCloskey New Venture Competition, another intense exercise in entrepreneurship. By this time, her startup had a name, Torigen Pharmaceuticals. Says Kalinauskas, “I saw the McCloskey Competition as a way to prove Torigen had legs.”

When the winners were announced in April 2013, Torigen won second place overall. Kalinauskas realized she had the foundation to grow a company. There was, however, an important step before the company was official. She needed legal access to Suckow’s vaccine technology.

“Cook Biotech had licensed the technology from Notre Dame. Because their interest was in human applications, they were willing to licensing it for animal applications to Torigen. Once we had that, we were on our way,” she explains. Kalinauskas was joined in Torigen by Suckow, who serves as chief technology officer. (He is also a professor and associate vice president of research at the University of Kentucky.)

The patented technology serves as the platform of Torigen’s lead product, an immunotherapy cancer vaccine branded as VetiVax. Unlike chemotherapy and radiation oncology which target cancer with drugs and radiation, Torigen uses a portion of an animal’s own cancerous tumor combined with an extracellular matrix to create a personalized cancer immunotherapy. The resulting vaccine works by stimulating an immune response within the pet’s body to target the cancer cells. Activating these tumor-associated antigens within the immune system help the recipient animal fight their tumor through a natural response that may increase the likelihood of a successful outcome. This approach is also far less stressful and painful for the animal than surgical treatment, chemotherapy and radiation.

Although Torigen was officially founded in 2013, it took four years to formally standup the company. In the meantime, Kalinauskas worked as a market research specialist in the biotech industry. “In my free time, I moonlighted with Torigen, mainly concentrating on fundraising,” she says.

The company’s big break came in 2017 when Kalinauskas came on full time and also established its first lab at the University of Connecticut’s Technology Incubator Program (TIP). Soon after, Torigen began getting their vaccine out to veterinarians as an experimental biologic as classified by the United States Department of Agriculture. It is worth noting that unlike pharmaceuticals for humans, biologics for animals have their own regulatory pathway for approval.

From the beginning, the response from veterinarians was positive. Says Kalinauskas, “Treatment options for cancer were so limited and so out of reach for most pet owners that veterinarians were very happy to have a new option for treatment that was a fraction of the cost and anecdotally was showing promising results.”

In 2020, Kalinauskas and Torigen reached an inflection point. They secured funding that allowed them to hire Dr. Michael Lucroy, a veterinary oncologist who serves as their chief medical officer. This led to more data, more publications, more data and more conversations across the industry. This was followed by another key hire, Sean Fitzgerald as vice president of market development, who hit the ground running. The icing on the cake was Kalinauskas being named among Forbes 30 Under 30 for science. “That was quite an honor,” she says.

Scaling a company, regardless of industry, is one of a startup’s biggest challenges. Torigen needed to get in front of as many veterinarians as possible. To do this, Fitzgerald engineered a distribution agreement with Victor Medical Company in June 2021 to expand channel partnerships across the United States. Victor Medical is the largest privately-owned veterinary distributor in California, Arizona, Nevada, and Oregon.

“Our distribution deal with Victor is all about increasing our voice in the marketplace. With an established network of sales reps, they have an established presence and can quickly get into more clinics to present to vets,” Kalinauskas says. “Victor is a great complement to our internal sales team.”

Another big challenge Kalinauskas has faced is funding. “It’s been interesting,” she says. “We’re not human biotech and we’re not a consumer product so finding groups willing to invest in the space has been difficult.”

However, as Torigen built out its team and began gaining traction, their value proposition became more attractive to investors. In January 2021, the company closed on a $3.5 million convertible debt round that included a mix of angel investors and venture capital. Funds. Notre Dame’s Pit Road Fund participated in the round. Kalinauskas is now in the process of closing on a Series A round in April that is expected to bring in about $7.5 million. Funds from the round will get Torigen to the next level of scale and market penetration while expanding their pipeline.

As Kalinauskas’ founder’s journey approaches the 10-year mark, the thing that keeps her motivated is knowing the difference they are making in their lives of companion animals and their owners. “Now when a veterinarian tells someone their dog or cat has cancer, we’re providing a new, promising and more affordable treatment option. Knowing we are giving more pet owners  access to sophisticated cancer care for their pets is a great feeling.”

She is also grateful for her team. “We’ve been fortunate to recruit people who share our mission of helping many who previously had very few options. We have some pretty innovative people.”

Kalinauskas is already looking ahead at what’s next. She is actively seeking in-licensing of additional drugs that will bring more accessible treatments to the veterinary marketplace. “We don’t want cost to keep pet owners from caring for their loved ones,” she says.

Her advice to others who want to start a company is this: “Make sure you are ready and then jump all in. It’s the only way to make it work.”