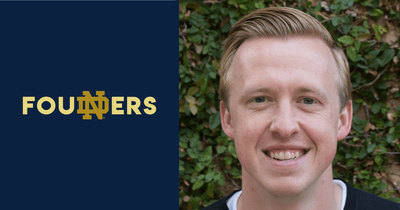 The last two weeks have caused all of us at the IDEA Center to pause and reflect on the challenges posed by the COVID-19 pandemic. Today, we share the profile of Notre Dame alumnus Alex Jones who at one point struggled with his faith. After consulting with one of his former priests at the University of Notre Dame, Alex began to explore the traditional meditations and prayers of the Catholic Church and in the process, reconnected with God. This led to his starting, along with other Notre Dame alumni, a startup called Hallow, a Catholic prayer and meditation app available to all who seek comfort and divine inspiration.

Alex Jones was raised a Catholic, but admits it was only to the extent that his mother “dragged” him to mass on Sundays. During high school and then at college at the University of Notre Dame, he fell completely away from the Church and considered himself agnostic, even atheist at times. Though he would attend mass with friends on occasion, it was social rather than prayerful.

Jones admits his college years were a relatively dark and empty time in his life. He was filled with feelings of hollowness and anxiety; caught up in insecurity, jealousy and lust; lacking motivation and purpose. Those closest noticed his struggle. “My mother, who is a devout Catholic, was disappointed. But she had faith I’d come around.”

What his mother didn’t know was that her son, with the help of God and close friends from Notre Dame, would emerge from the darkness and go on to create the number one Catholic prayer app in the world. To quote many a Catholic mother, “Praise the Lord!”

Jones had just graduated from Notre Dame and taken a position with McKinsey & Co. in Chicago, when he felt the need to determine what he believed from a faith perspective. “I tried secular mindfulness apps like Headspace and Calm, but felt they came up short. I tried praying, but thought I was just talking to myself.”

Filled with unanswerable questions, Jones turned to the experts. He contacted a priest he knew at Notre Dame and asked if prayer and meditation intersect. The answer he received makes him smile today. “Umm…yeah, we’ve been doing it for 2,000 years,” said the priest, who then introduced Jones to Lectio Divina and other contemplative techniques intended to promote communion with God.

It was while putting Lectio Divina into practice by meditating with scripture that Jones broke down into tears, having found his way back to his Catholic faith. “The passage was about Jesus teaching the Lord’s prayer,” he recalls. “The word ‘hallow,’ to make holy, stuck in my mind. It gave me a deep sense of peace—and changed my life.”

In rediscovering his faith, Jones also found there were many beautiful things in Catholicism he knew nothing about. He reached out to Father Pete McCormick, his rector at Notre Dame and a strong role model, for guidance. He began talking with friends from Notre Dame—Erich Kerekes, Alessandro DiSanto, Abby Fredrickson and Bryan Enriquez—about creating a Catholic app around prayer and meditation.

“We knew this was something that was needed, so we decided to spend a few months building the app we ultimately named Hallow,” Jones says.

In the meantime, Jones moved to the San Francisco Bay area to pursue a master of business administration from Stanford University. When he told people what he was working on, the response was interesting. “People would ask, ‘Do people still do religion?’ Apparently, our app was contrarian in Silicon Valley.”

Undeterred, Jones and the Hallow team persisted, letting three core goals guide them. First, remain 100 percent true to the teaching of the Catholic Church. Second, help people build a better life with God through prayer. Third, give people the foothold they needed to facilitate a return to their Catholic spirituality and the Church.

The last goal is the one that excites Jones the most. “Between 1980 and 2019, the percentage of Catholics attending mass had fallen by half. And yet, in 1980 and again in 2018, 81 percent of Catholics said they pray each week. Recognizing this, the goal of Hallow is to use this passion for spirituality as an opportunity to help people re-discover the beauty of the Catholic faith.”

Ultimately, Jones and his friends left their jobs to launch Hallow in 2018 and commit themselves fulltime to its success. They bootstrapped the original app and used Kickstarter to fuel their ongoing development and growth. Today, the Hallow app is available for IOS and Android and has been downloaded more than 100,000 times. Users have completed a half million prayers. A Spanish version is in the works. While Hallow is a subscription model, people can also support the app with pledges with specific intentions.

“Hallow is an incredible resource for anyone, but particularly for Millennials and young adults searching for deeper spirituality in their lives,” Jones explains. “It’s working. We get thankful notes everyday from people who have struggled with faith or depression who say Hallow is helping them. It shows in our near perfect rating on Apple; but this is the real reason we’re building Hallow. People are growing closer to God.”

Still, as a young startup company, success is not a given. Jones often turns to Bishop Kevin Rhoades of the Diocese of Fort Wayne-South Bend for advice. He journals. And he also asks God for help. So far, his prayers are answered.

Jones now sees his years at Notre Dame in a different light. “Essentially everything of value in my life, I found at Notre Dame. My wife. My friends. And now, my faith.” He adds, “Finding my faith and starting Hallow have been a life-changing experience.”

Jones suggests those considering starting a company should reflect before acting. “If your faith is important to you, bring God into you decision-making. Follow where He’s leading you; it’s helpful to have God on your team.”