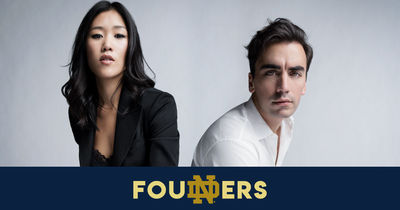 Fernando Garcia had a secret. He was a student in the University of Notre Dame’s prestigious architecture program, but was nurturing a long-held dream that didn’t involve designing buildings: he wanted to be a fashion designer.

Garcia, who grew up in the Dominican Republic and northern Spain, had a lifelong penchant for sketching anything and everything on paper napkins. This hobby ended up landing him a big break due to a chance connection. “A friend of a friend of my father’s knew fashion designer Oscar de la Renta, which led to an opportunity to meet him. I showed Mr. de la Renta my drawings and he encouraged me to come to New York City and intern with his fashion house,” Garcia recounts. “For six years, I honed my design skills and ultimately became a principal designer.”

It was during this time at Oscar de la Renta that Garcia met another talented designer, Laura Kim. The duo clicked as collaborators and became close friends. In early 2015, Kim suggested the two leave Oscar de la Renta and start their own fashion label. Garcia’s initial response was not what Kim expected. He wasn’t interested in starting a company; he wanted to be creative director of a big international fashion house.

Life doesn’t always go as planned, however. After a bit of persuasion, Garcia agreed to leave his dream job in May 2015 to launch Monse (pronounced Mon-say) with Kim. Within a month, they debuted their first collection, a spring/summer line.

“When you’ve had a creative goal your entire life such as I had of working for Oscar de la Renta, the idea of going out on your own is intimidating. When you share your designs, you are exposing your vulnerability to the world. An established brand like Oscar de la Renta is recognized all over the world. Monse was new; Laura and I were suddenly the face of a brand. And with our own company, we had to figure out who we were as designers and as people,” he says.

In a surprising twist and less than a year after launching their company, Garcia and Kim were invited to return to Oscar de la Renta in September 2016 as co-creative directors. In addition to creating new collections for Monse every four months, the pair is also responsible for designing Oscar de la Renta’s ready-to-wear, accessories, bridal and children’s collections.

“I am a very ambitious person,” says Garcia. “When given the opportunity to return to my dream job and do two brands that are creatively different, I jumped on it. When one side of my brain is exhausted creating for one, I can turn to the other side for the other.”

Success has its challenges and Garcia has discovered managing people is one of them. “The Monse team is young and eager. They want to learn everything and need attention everyday. To keep the creativity flowing, we have to make things exciting and fun. It’s like becoming a parent—or how I imagine a parent to be.”

While he appreciates the desire to start a company straight out of college, the Notre Dame graduate suggests a more measured approach. “Learn from people you admire most in their workplace. See the good and the bad. Learn the lessons you need without breaking your bank. Then start your company.”

The biggest reward of launching his own fashion brand with partner Kim is “being able to create what we imagine in our minds.”

Says Garcia, “I never would have imagined making a living from those doodles I did when I was eight years old on napkins... where there is a will there is a way.”