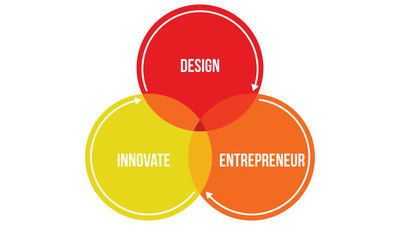 Entrepreneurship and innovation, and now increasingly design, are often used in the same sentence, as if they are similar things. Yet while all three are highly related, they are not the same. Each has a role to play in the formation and growth of new enterprises and each often resides in different individuals. Understanding the differences may help an organization effectively recruit and develop talent in each area for the benefit of teams and the organization as a whole.

Let’s start with the differences and then we can effectively end with how they overlap.

Innovators are primarily discoverers. Innovators discover, uncover, and reveal. They are sculptors, creators, and even magicians. The key characteristic of innovators is inquisitiveness. The key outcome is an idea or discovery that has great promise. Examples of innovators are often found among academics, whose research programs lead to novel discoveries.

In contrast, entre (intra) preneurs are primarily builders. They build, derisk, and add value. They are molders, refiners, sanders, and executers. The key characteristic of “’preneuership” is persistence. The key outcome is the transformation of a great idea into something useable by others. In a very real sense, ‘preneurs build confidence in the viability of the idea generated by the innovator.

In comparison, designers create methods, processes, functionality, interactions, and operations in ways that deliver, operate, and use more efficiently and effectively the idea. They create the way a product or service will be used or applied. The key characteristic of design is applied creativity. The key outcome is the ability to use or apply something in a better, more effective and efficient way.

As different as the three types are, innovation, design, and entrepreneurship are also tightly connected. There is overlap between the three. How does this overlap manifest itself? Put differently, where are the synergies? The connecting characteristic that all three types of people share is vision: the ability to conceptualize what has yet to become reality.

There are great examples of the power of having all three characteristics on one team. Consider the founding fathers of the United States. Early political philosophers like Locke, Rousseau, and Hume conceptualized innovative new forms of government, but were never able to actually design those systems into something that could be adopted. This task was left to people like Adams, Franklin, and other writers of the constitution, a document so well designed that it has stood the test of time for over two centuries. But in turn they didn’t build the country. Builders and implementers of that document included Washington, Lincoln and others, entrepreneurs who built on the vision of earlier innovations and designs. The outcome of all three types of inputs has been the most open and democratic system of government in the history of the world!

Are there any examples of people with all three skills? Perhaps there are some. One example might be Steve Jobs. His ability to innovate, design and be an entrepreneur created a company that has at times been the most valuable organization in the world. Jobs applied all three characteristics not once but twice in the history of Apple. He innovated new technologies, designed new products, and built the company and the execution of strong market and brand development.

Ultimately, it’s not important that all three or even two of these characteristics resides in the same individual. It is important, however, that every organization have all three, even if each is embodied in different people. Great innovation, great design, and great entre (intra) preneurship will always be necessary to create great value creation.