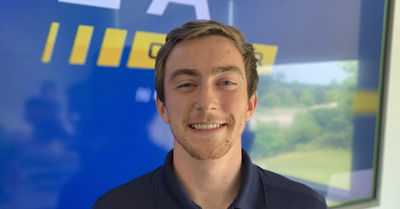 It was the Spring of his Junior year at Notre Dame when Krystian Gorski (ND ‘19) realized that he wanted to pursue something different than the summer internship offer he had received for an engineering position at an industrial manufacturing company. When Krystian began to look for other opportunities, he found himself making the trek over to Innovation Park to learn more about the IDEA Center. Kunigunda Szentes, current Risk Assessment Program Manager at the IDEA Center, had just started in her role when she met Krystian and hired him as a Technical Analyst. During the following academic year, Krystian was promoted to the role of Senior Analyst where he took on more responsibility with managing the team.

For Krystian, working at the IDEA Center was a great opportunity to draw from his technical expertise. “They were looking for someone with some experience in technology. They had business-minded folk but they wanted people who could also analyze technically heavy papers. At heart I am an engineer. I didn’t want to stray away from that.” Kunci was immediately able to leverage Krystian’s passion for chemical engineering and bioengineering, Krystian shares. “The way she enticed me was by saying she had a lot of technologies in those spaces, and I ultimately got to work on them.” Krystian was so invested in better understanding the technology, that he actively sought to connect his IDEA Center projects to his academic experience by taking more bioengineering classes. In addition to those projects which he deeply understood, Krystian was often asked to push the boundaries of his knowledge and take on projects in industries he was less familiar with. “[As a technical analyst], I would work through dense documents and try to gain basic knowledge. I would take away the most important points, consider the business opportunity, assess the business risks, and present to a group of people who might not have that technological background.”

Working with the IDEA Center’s “2-Stroke” Risk Assessment team not only requires heavy research and technical dissection, but analysts learn the importance of going out into the field to ask questions of the experts. Thinking back to one experience he had trying to get a hold of a surgeon, Krystian chuckles and explains “I ended up speaking to him while he was walking his dog. The phone call took a lot of persistence, but he had the right background [for the project I was on]. It was a casual conversation, but it gave me a lot of confidence.”

Krystian now works as an Associate Process Engineer at Kymanox, serving as a consultant to biopharmaceutical companies within the regulatory product and compliance space. Similar to how Krystian was asked to read dense and highly technical papers as an analyst, this discipline is still reflected in the work he does today. “My job also has a lot of documentation. I have to be able to sift through and digest [ information] quickly on a wide range of projects.”

A great internship experience would not be possible without a great leader, and Krystian speaks highly of working under the guidance of Kunci because he felt that she genuinely valued what he was bringing to the table. “She trusted me to discuss what we should do and how we should proceed. As she learned and perfected her managerial skills, I had the opportunity to be right there with her. As a Senior Analyst, I was able to immediately implement some of these leadership skills as I led weekly meetings with analysts to review their work and train on new material.”

During his senior year, when Krystian began applying for jobs, he saw immense worth in being able to talk about his experience working at the IDEA Center. “As a college student I was getting real work experience. This was the best college opportunity I had. It prepared me for post graduation work by teaching me skills that you can’t truly replicate in the classroom: time management, project management, being a self-starter. [Working at the IDEA Center] rounded out my college experience and prepared me well for the real world afterwards.”