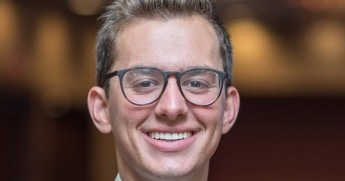 It was Carlos Nazario’s (ND ‘19) Junior year at Notre Dame and only six months after the IDEA Center opened when he was asked to join the first cohort of Venture Coaches. Carlos describes what it was like: “when you first get started you have no training materials and are just learning on the fly.” The novelty of what the IDEA Center brought to the Notre Dame community was exciting for Carlos. “I knew what the IDEA center was trying to accomplish, and it was something I was really interested in because of my entrepreneurial drive and business background.”

Carlos and his brother, Jorge Nazario (also a Notre Dame alum), started their journey as aspiring entrepreneurs back in high school.  “That was our first test with being entrepreneurial. We learned there is a lot of harsh reality in terms of ownership and faced questions like How do you get that funding requirement? How do you get people to sell? Am I going to be stuck with that inventory?” These challenges and questions derived from Carlos’ experiences became invaluable pieces of insights which he was able to utilize in his work. As a Venture Coach Carlos helped students through the commercialization process starting from square one. “What’s great about being a Venture Coach is interacting with people and learning about their ideas, about what works and what doesn’t - that’s the biggest thing I learned from the IDEA Center.” Carlos helped prepare students to pitch their ideas to judges, draft business plans, and conduct customer validation. “It was amazing being a part of what the IDEA Center was doing to help ideas go from zero to successful ventures. In my entire year and a half as a Venture Coach, I had seven startups get $5,000-$10,000 in funding.”

Carlos’ early interest in entrepreneurship and his involvement with the IDEA Center aligned well with his career interests in consulting. By the time Carlos started working at the IDEA Center, he already had an internship lined up with PwC which is where he works today as an Associate Consultant within the company’s financial services division. Carlos’ ability to be flexible and his willingness to jump around to different projects has gotten him far. “I’m doing an operating model for a finance division and it’s completely different from what I was doing three months ago. That’s what’s cool about consulting.”

Carlos can draw many connections between his innovative aptitude and the work he does as a consultant. “The entrepreneurial mindset is about looking out for opportunities and having an eye to what the client is looking for. I also consider what is the biggest takeaway I can apply to a future business.” While right now Carlos serves as a consultant for other people’s companies, he says that a goal of his is to one day start his own business.

Carlos wouldn’t trade his time at the IDEA Center for anything. “It is my 100% recommendation to work at the IDEA Center. I thought the people I was working with at the IDEA Center were absolutely amazing. I was getting business exposure to things that are invaluable when you are working in industry. When you have an entrepreneurial drive, you can catch ideas that would otherwise slip through.”